Lok Sabha Elections 2019: Why West Bengal Has Emerged As The Most Violent Battleground

For the first time in the seven-decade old election history of India, West Bengal has assumed such significant importance in Lok Sabha elections. 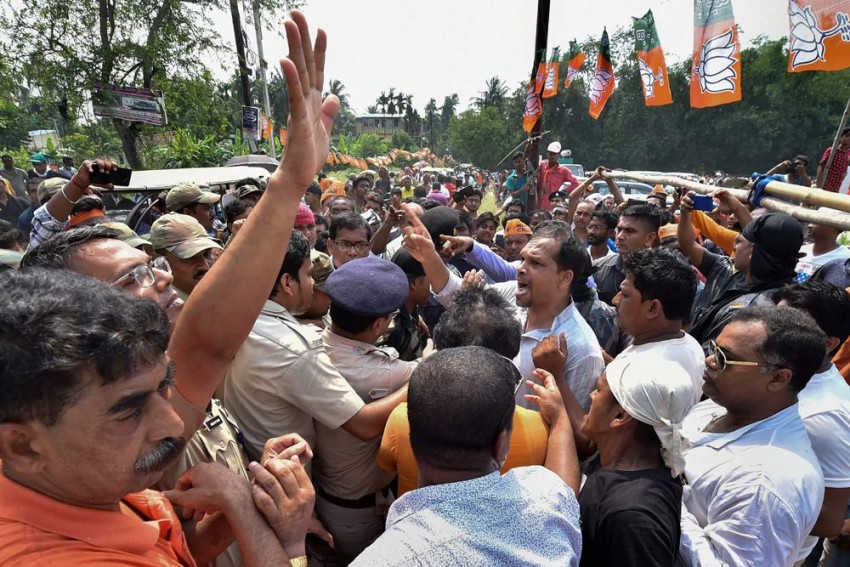 West Bengal is in limelight after 70 years. For the first time in the seven-decade old election history of India, the state has assumed significant importance in Lok Sabha elections 2019. After Uttar Pradesh (80) and Maharashtra (48), West Bengal (42) is the third largest state in terms of seats. Since the SP-BSP pre-poll alliance in UP has diminished the chances of the BJP repeating its 2014 performance when it got 71 out of 80 seats in the state, the party needs to look elsewhere to make up for the loss. Hence, West Bengal, where its previous achievement got stuck at mere two seats, has become a key state to focus on.

There are several reasons for the BJP to focus on Bengal. First, ever since Partition, the presence of millions of Hindu refugees who came from erstwhile East Pakistan, now Bangladesh, has made the state a soft underbelly for Hindutva politics. Despite a strong legacy of secular-liberal politics that was built around the general consensus among the mainstream political parties, West Bengal has witnessed several major and minor communal riots in past 70 years that created permanent fissures in Hindu-Muslim amity.

Second, the ruling Trinamool Congress (TMC), with its ostensive appeasement policy to the minorities gave the BJP a long stick to beat them with. Third, despite doing some good work for the poor, introducing schemes like Kanyashree for empowerment of girl students, providing cheap ration and laying new roads in rural Bengal, TMC’s arrogance, rampant corruption and highhandedness have alienated a large number of people. Lastly, in the absence of a sustained and meaningful protest movement against the ill-doing of the ruling TMC, the mainstream opposition, i.e., Left and the Congress are losing their support base fast, thus creating a vacuum in the Opposition space.

There are instances of how the Left abdicated their responsibility and abandoned their space. In September 2018, the CPI(M) Birbhum district secretary Manasa Hansda gave a call to hold protest rallies throughout the district, but it was called off the next day after opposition from the police and the TMC. The BJP district president Ramkrishna Roy seized the opportunity and held a protest march, defying police and TMC warnings. Many participants who swelled the BJP rally were Left supporters. A CPI(M) district committee member of Birbhum says that in these elections, it is not only the CPI(M) supporters who have switched their allegiance to the BJP, even local and area committee leaders of the CPI(M) have been seen actively working for the saffron party. It is not for nothing that Buddhadev Bhattacharjee, veteran CPI(M) leader and former chief minister of West Bengal had issued an appeal to his party workers and sympathisers to not support the BJP. His comment, "Is it wise to jump from TMC frying pan to BJP fire?" has found resonance with Manik Sarkar, former chief minister of Tripura, who was ousted from power by the BJP. Whether their appeal will have positive impact on the CPI(M) workers and supporters is yet to be seen. To enthuse the Left, so that they retain their vote share and do not help the BJP, Mamata, in her desperation, started helping the CPI(M) to reopen their party offices (that were captured and shut down by the TMC) in various parts of rural Bengal. Also, the TMC supremo is now praising Bhattacharjee for his staunch anti-BJP stance. But one thing is certain, the CPI(M) in particular and the Left in general, are in for a serious crisis, which might push their politics to oblivion.

Analysing these points, the BJP seized the opportunity. With an active support from the national leadership, state BJP started working overtime on these factors to mobilise support in their favour. In the last three years, BJP president Amit Shah has visited the state several times, strategised and energised the state unit to gear themselves up for the battle.

It is true that BJP or its predecessor Bharatiya Jan Sangh (BJS) has never been able to make any significant dent in electoral scenario in Bengal. In 1952 assembly election, BJS got nine seats and the Hindu Maha Sabha (HMS) got four. In the first Lok Sabha, there were two BJS MPs and one HMS MP from Bengal. After that there was a long interregnum of 46 years till the BJP got its first MP in 1998 from Bengal. Since 1991, when BJP’s vote share shot up from four per cent to 11.7 per cent, BJP calibrated its campaign on the issue of illegal immigrants from Bangladesh to play up the latent anti-Muslim sentiment among Hindu refugees settled in the state. It is not without reason that BJP’s victory in Dum Dum in 1998 and Dum Dum and Krishnanagar in 1999 were in a refugee belt. However, as they were in coalition with the TMC, they got to contest limited number of seats and thus their vote share was restricted to mere six per cent. In 2014, riding on the Modi wave, the BJP won two seats on its own and the party’s vote share went up to 16.9 per cent.

But, with the steady erosion of the Left and secular forces (Congress have limited presence in three districts -- Malda, North Dinajpur and Murshidabad) the politics in Bengal has been polarised between two parties: TMC and BJP. To achieve poll position, the BJP started hammering TMC on issues of illegal migration, appeasement to Muslims, corruption and intolerance. Also, for the last two years the BJP upped its ante on communal issues by observing Ram Navami in a big way, forcing Mamata Banerjee to follow a line of soft Hindutva. Now, she is also competing with the BJP to prove her credentials as a ‘real Hindu’, while terming the BJP’s Hindtva as a contrived one.

Recently during West Bengal CM’s election campaign in a village, three boys shouted ‘Jai Sri Ram’ in front of Mamata’s convoy makes the narrative symbolic of the change that has taken place in present day election scenario in West Bengal. The poor people, who have been substantially dependent on state’s dole for their livelihood, are mostly pliant and seldom protest against the ruling establishment for their wrongdoings. More so, if they dwell in rural areas, where the ruling party controls their lives through village panchayats and other institutions, they try to remain invisible in time of political contests. Yet, the fact that these boys could gather courage to throw a challenge to the all-powerful chief minister says volumes about the groundswell for BJP.

By targeting Bengal in a big way, Modi and Amit Shah are trying to kill two birds with one stone. Their first goal is to gain maximum seats in West Bengal, Bihar, Jharkhand and Odisha; the four states have a total of 117 seats. Earlier, the BJP got 47 seats in total in the four states. Now they are desperate to increase their tally. But their other aim is to pin down Mamata. Ever since the January brigade rally of Mahagathbandhan at Kolkata, Mamata is carefully crafting her image as a leader who can rise above others and can stitch together all regional parties to form one unified alliance pitted against the BJP. If the BJP’s primary goal is to get maximum seats in Bengal, it is also equally important for the saffron party to project Mamata as a corrupt, intolerant and undemocratic leader, so that her acceptability among other regional players would be suspect.

Finally, in a hypothetical scenario, where the BJP secures 25% vote share in Bengal, they can make serious plunge to oust Mamata from power in 2021 state assembly election. Considering all these factors, it makes sense that after Uttar Pradesh, Modi and Shah are devoting maximum campaign time in Bengal. Like Modi and Shah, it is a do-or-die scenario for Mamata too.

(The author is a renowned journalist from West Bengal. Views are personal.)