'The protesters violated conditions fixed for the rally and they also resorted to violence and vandalism,' Delhi Police PRO Eish Singhal said. 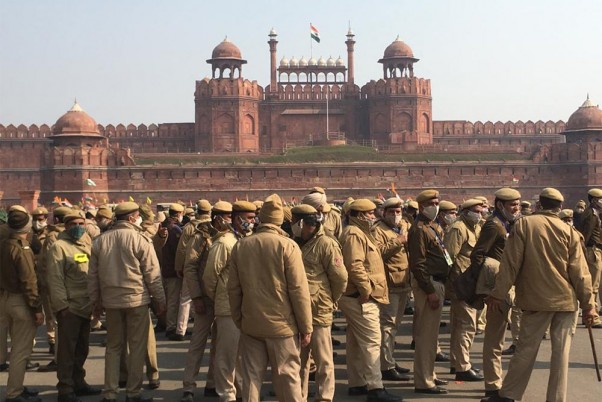 The protesting farmers not only violated the conditions which were agreed prior to the tractor rally but also indulged in violence and vandalism, eventually injuring 86 of its personnel, the Delhi Police said on Tuesday.

In a statement, the Delhi Police expressed that it partook in all due diligence in following the conditions for the rally, but it was the farmers who began their agitation much ahead of the mutually agreed time and caused extensive damage to public property.

The police statement comes after clashes broke out between protesters and police during the farmers’ Republic Day tractor parade.

"The protesters violated conditions fixed for the rally. The farmers began tractor rally before the scheduled time, they also resorted to violence and vandalism," Delhi Police PRO Eish Singhal said.

"We followed all conditions as promised and did our due diligence but the protest led to extensive damage to public property. Many policemen were also injured during the protest," Singhal said.

Alok Kumar, Joint Commissioner of Police, said legal action will be taken against those who assaulted the police personnel during the rally today.

Delhi Police Additional PRO Anil Mittal said, said a total of 86 police personnel were injured in the clashes including at the Red Fort and in the East District.

A senior police officer said that in the morning at Ghazipur Border, a probationer IPS officer got injured as he along with Additional Deputy Commissioner of Police (East) Manjeet tried to stop the farmers from breaking the barricades.

Additional DCP East Manjeet had a close shave as one of the farmers tried to hit him with his tractor but he escaped and did not sustain any injuries, the official said.

The injured, including police personnel, were brought to the LNJP Hospital following the clashes on Tuesday. LNJP Hospital is currently a partially COVID-19 facility in central Delhi near ITO.

"Some of them were discharged after administering first-aid. Right now, about 22 of them are admitted, including an SHO and 10 other police personnel," a senior official of the hospital said.

Asked about the nature of injuries sustained, the official said they include leg and arm fractures and cut wounds.

Wielding sticks and clubs and holding the tricolour and union flags, tens of thousands of farmers atop tractors broke barriers, clashed with police and entered the city from various points to lay siege to the Red Fort where they climbed the flagpole on Republic Day on Tuesday.

While police used teargas shells to disperse the restive crowds in some places, hundreds of farmers were seen chasing them with sticks at the ITO and the Red Fort and ploughing their tractors into parked buses, barricades and security personnel deployed to maintain law and order at several other places. A protester died after his tractor overturned.

The ITO resembled a war zone with a car being vandalised by angry protesters and shells, bricks and stones littering the wide streets, a testimony to the ugly turn taken by the two-month-long farmers' protests against the agri laws.