Rajnath Singh along with Union Agriculture Minister Narendra Singh Tomar sat with the farmers for more than an hour and discussed at length all issues related to the farming sector, including the farm laws. 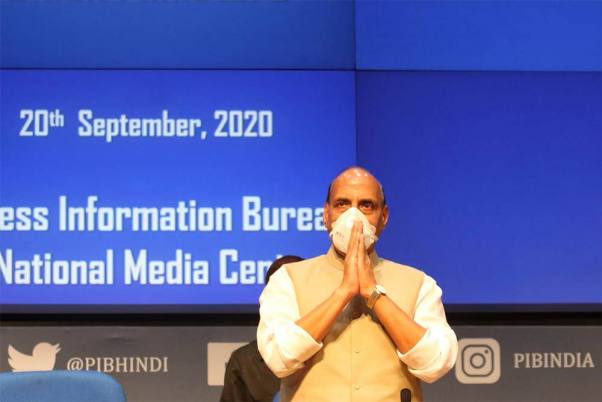 Senior BJP leader and Union Minister Rajnath Singh on Tuesday reached out to farmers, mostly from protest-hit Punjab and Haryana, and met them at his residence here to discuss the new farm laws.

The meeting with the farmers came in the backdrop of protests against the laws by opposition parties, including the Congress.

Singh along with Union Agriculture Minister Narendra Singh Tomar sat with the farmers for more than an hour and discussed at length all issues related to the farming sector, including the farm laws.

After the meeting both the ministers and the farmers, many of whom are Padma Shri recipients, applauded Prime Minister Narendra Modi and the BJP-led government at the Centre for bringing these legislations.

They said that these laws will open more avenues for farmers to sell their produce and were needed to reform the farm sector.

Kanwal Singh Chauhan, a farmer from Haryana, claimed that attempts are being made to create misunderstandings about these legislations.

"Farmers and their organizations were demanding reforms in the agriculture sector and with these three bills, the Modi government has brought much-needed reforms, and we welcome this," Chauhan said.

When asked why some farmers are protesting against these legislations, Chauhan claimed that they are not aware of these laws and misunderstanding has been created among them by some elements.

The government has already made it clear that the Minimum Support Price system will stay so now there should not be any fear and concern among farmers, he said.

Echoing similar sentiments about the farm bills, Bijendra Singh Dalal, president, Haryana Farmers Self-Help Group, said there is a need to create awareness about these farm bills among farmers. These legislations will be beneficial to farmers, in the long run, he said.

Last week, Singh had assured farmers that the Minimum Support Price will stay and it will continue to rise.

He had also said that he will talk to farmers to clear all their apprehensions about these three farm-related bills.

Besides farmers, MJ Khan, Chairman of the Indian Chamber of Food and Agriculture, was also present in the meeting.