The family members of a patient, who died due to Coronavirus, had to flee with the half-burnt body in an ambulance to save their skin from the mob which pelted stones and attacked them with sticks. 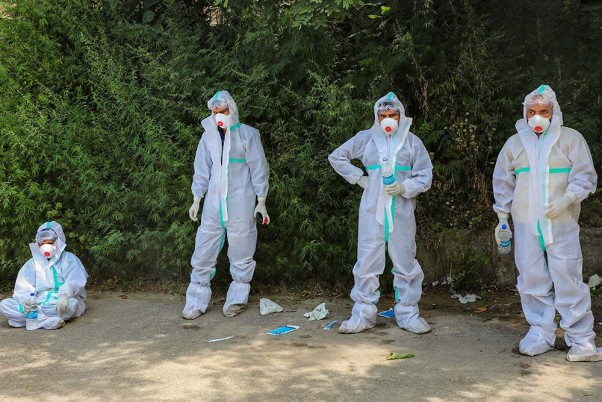 Relatives of a COVID-19 victim wait outside a hospital after they were forced to flee a cremation ground by locals of the area along with the body, in Jammu.
PTI Photo
PTI 2020-06-03T09:33:50+05:30 Family Of Covid-19 Victim Flees With Half-burnt Body After Mob Attacks Them In Jammu

A mob on Tuesday disrupted the last rites of a Covid-19 victim and forced his family members to flee with the half-burnt body in Jammu, prompting intervention by the administration which later ensured the cremation at another place as per protocol.

A 72-year-old man, hailing from Doda district, became the fourth victim of coronavirus to die in Jammu region. He breathed his last at the Government Medical College (GMC) hospital on Monday.

“We had set out for the funeral along with a revenue official and a medical team, and had lit the pyre at a cremation ground in Domana area when a large group of local residents appeared at the scene and disrupted the last rites,” son of the deceased said.

Only close relatives of the deceased, including his wife and two sons, were present during the cremation. They had to flee with the half-burnt body in an ambulance to save their skin from the mob which pelted stones and attacked them with sticks.

“We had sought permission from the government to take the body to our home district for the last rites, but we were told that all necessary arrangements were in place, and that we would not face any trouble during the cremation,” the victim’s son said.

He also alleged that the security officials present at the scene were of no help.

Two policemen who were present there failed to act against the unruly crowd, while the accompanying revenue official went missing, he said.

“The ambulance driver and other staff from the hospital helped us a lot and managed to take us back to the GMC hospital with the body… the government should have come out with a better plan to conduct the last rites of coronavirus victims, taking into consideration the past experience and problems encountered during the funeral of such victims,” the victim’s son said.

Later, the body was taken to a cremation ground at Bhagwati Nagar area of the city, where it was consigned to flames in the afternoon in presence of senior civil officials, including additional deputy commissioner and sub-divisional magistrate under tight security.

“My uncle was admitted in the hospital last week and died on Monday afternoon. He was suffering from various ailments, especially lungs and heart diseases. Before shifting him to GMC hospital Jammu, he underwent a coronavirus test in Doda which came negative,” nephew of the deceased said.

However, he said, the victim’s second test after his admission in the GMC hospital came positive on Sunday.