‘Unusually high’ instances of farm fires in Haryana and UP have had an adverse impact on Delhi’s air quality, officials say. 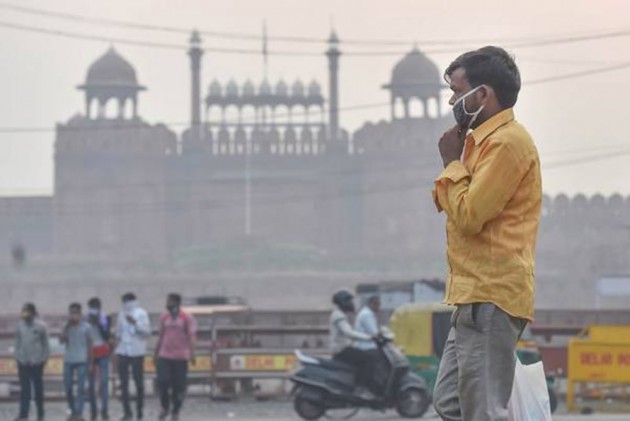 The national capital's air quality has continued to reamin in the “very poor” category on Sunday with an “unusually high” number of farm fires negating the effect of better ventilation, government officials said, adding that the situation is likely to get better by Monday.

According to the Ministry of Earth Sciences' air quality monitoring agency, SAFAR, the share of stubble burning in Delhi's PM2.5 pollution was 32 per cent on Saturday, the second highest this season so far. It was 19 per cent on Friday and 36 per cent on Thursday -- the maximum so far this season.

According to the central government's Air Quality Early Warning System for Delhi, instances of stubble burning was unusually high on Friday over Punjab, Haryana, Uttar Pradesh and Madhya Pradesh which had an impact on the air quality in Delhi-NCR and other parts of northwest India. NASA's satellite imagery showed a large, dense cluster of fire dots covering Punjab and parts of Haryana and Uttar Pradesh.

According to SAFAR, Delhi's AQI did not improve much despite better ventilation, mainly because of highly favourable north-westerly boundary level wind direction and perfect wind speed for intrusion of pollutants from farm fires.

“Increased local surface wind speed with faster dispersion conditions are counteracting with increased fire-related emission and associated intrusion. But still, AQI is likely to improve for the next two days as dispersion will eventually play a lead role,” officials at SAFAR said.

According to the India Meteorological Department, the predominant wind direction was northwesterly and the maximum wind speed was 15 kilometres per hour on Sunday.

Calm winds and low temperatures trap pollutants close to the ground, while favourable wind speed helps in their dispersion.

The city's ventilation index – a product of mixing depth and average wind speed – was expected to be around 8,500 metre square per second on Sunday – favourable for dispersion of pollutants.

A ventilation index lower than 6,000 sqm/second, with the average wind speed less than 10 kmph, is unfavourable for dispersal of pollutants.