Congress Chief Election Pushed To June, Rahul Says Get It Done And Move On

A more visible and aggressive Rahul Gandhi expected in coming months but will he finally accept the party's top post too? 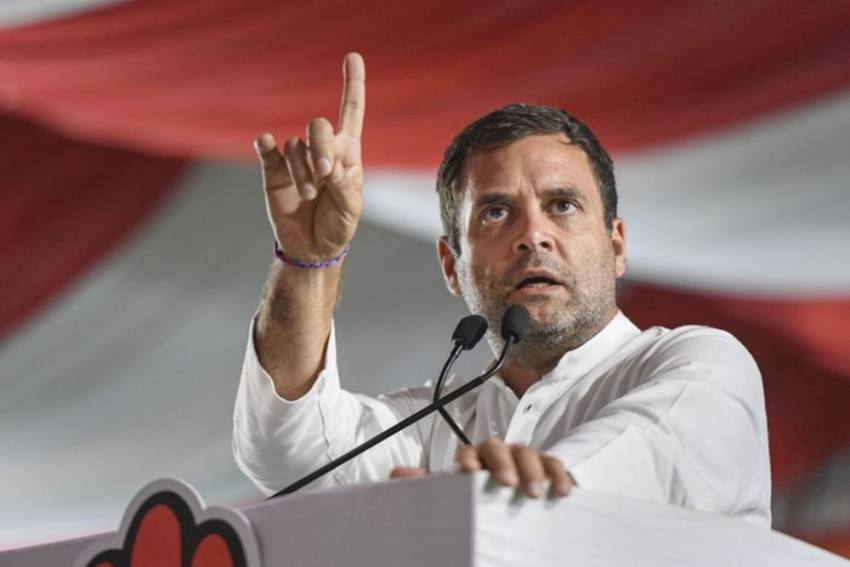 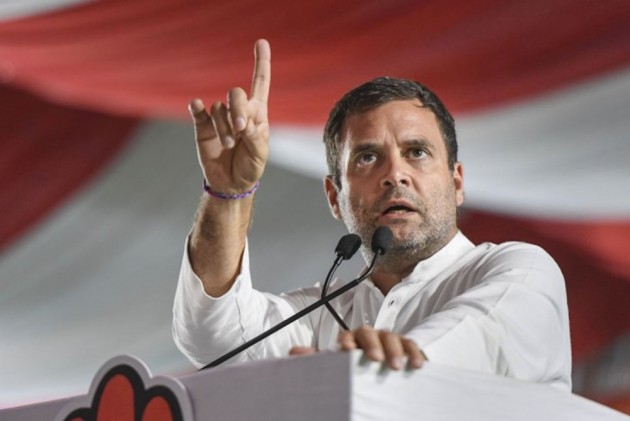 And yet again, the Congress party has decided to delay its long-awaited organizational elections to elect a full-time president – this time, till June. On Friday, interim Congress president Sonia Gandhi convened a virtual meeting of the extended Congress Working Committee (CWC) – the party’s top executive body. On the agenda of the meeting were discussions on key political and social developments in the country and how the Congress must respond to these during the forthcoming session of Parliament and on the ground as well as deliberations on the schedule for holding the party’s internal polls.

The Congress party’s Central Election Authority (CEA), headed by Madhusudan Mistry, had recommended that internal elections for the Congress president’s post be held in May. However, as soon as the issue came up for discussion, differences within the CWC on the urgency with which the party must resolve its leadership question came to the fore. Though the virtual meeting did not see an encore of the ugly acrimony that marked CWC deliberations last August, when 23 party leaders who have been pressing for organizational reforms were scorched by their own colleagues, the discussions, on Friday, weren’t exactly cordial either, say party sources.

A senior CWC member confirmed that veterans Ghulam Nabi Azad, P. Chidambaram, Anand Sharma and Mukul Wasnik (barring Chidambaram, the other three were signatories to the controversial letter addressed to Sonia demanding inner-party reforms and effective, full-time leadership) forcefully opposed the idea of delaying the internal elections any further. “They asserted that enough time had already been lost; that the CEA too had been discussing the matter for nearly six months…they tried to reason; Anand Sharma also reiterated that their demand for a full-time president was not a reflection on the leadership of Sonia or Rahul Gandhi but the need of the hour as the party was swiftly losing its grip even within the wider Opposition bloc,” the leader told Outlook, adding that “unfortunately, their suggestion was shot down and the CWC decided to hold the election in June once assembly elections in West Bengal, Tamil Nadu, Kerala, Assam and Puducherry conclude”.

The meeting saw Nehru-Gandhi family loyalist and Rajasthan chief minister Ashok Gehlot lock horns with Sharma for insisting on immediate internal polls. Gehlot, said sources, ticked off Sharma saying that it was the party that had chosen all Congress CMs, CWC members and other office bearers and that the nomination of these functionaries had “never been challenged… no one ever demanded internal polls when the party gave them these posts in the past, so what has changed now”.

While Sharma took exception to Gehlot’s tenor, sources said, former party president Rahul Gandhi tried to pacify the two leaders stating that “both are correct in their own way and I respect both you of greatly.” Rahul, who is widely believed to the frontrunner for replacing his mother again as full-term Congress president despite his repeated assertions for choosing a non-Gandhi chief, is learnt to have told the CWC that “the election should be held soon so that we can close this chapter once and for all and move on”.

Sources said party veterans A.K. Antony, Amarinder Singh, Ambika Soni and Tariq Anwar joined ranks with Gehlot in insisting that forcing internal elections on the party in May would mean distracting leaders from preparing for the upcoming Assembly polls in Bengal, Tamil Nadu, Assam, Kerala and Puducherry. As if on cue, other CWC members also joined in and said that keeping the Assembly polls in mind and the fact that campaigning for these would be in full swing by March and continue till May, the internal elections should be deferred by another month.

Officially, party general secretary (organisation) K.C. Venugopal told the media that the CWC “unanimously decided to make a minor change in the schedule for internal elections suggested by the CEA… the Congress party will have a new full-time president by June 2021 at any cost”. Sources said that the CEA will now rework the schedule for electing a new party chief and the election will happen in the last week of June.

There is still no clarity, however, on the demand of the 23 letter writers to simultaneously elect new members to the CWC and other party posts that are mandated to be filled through organizational election as per the Congress constitution. Venugopal’s response to queries by journalists on whether elections for the CWC will also be held in June was “laughable”, one of the letter writers told Outlook. “Venugopal says there is some confusion on whether election for Congress president and CWC members can be held simultaneously or if the CWC members should be elected after a party president has been elected. He said we will have to look at the party constitution for clarity – is the AICC general secretary in-charge of the organisation suggesting that he, the CEA chairman and all those sitting in the CWC are not conversant with the Congress constitution and find it confusing?” the letter’s signatory, a former chief minister, said.

A section of party leaders who have been lobbying for Rahul’s return as Congress president saidthat the Wayanad MP will be “more visible, more aggressive and more accessible in the next few months” and that he is open to leading the party’s charge in the upcoming assembly  polls. A packed itinerary for Rahul is already being prepared by members of his staff in consultation with Congress leaders from the poll-bound states. Rahul, who had been lampooned again by critics last month for going on a vacation to Italy in the midst of the ongoing farmers’ agitation, had returned earlier this month and visited Tamil Nadu to participate in the Jallikattu celebrations. He followed this up with a press conference during which he joined cause with the agitating farmers demanding a repeal of the three controversial central farm laws and also demanded an immediate inquiry into the leaked WhatsApp chats between Republic TV owner and editor Arnab Goswami and former BARC CEO Partho Dasgupta. The CWC, on Friday, backed Rahul’s assertions and passed resolutions demanding a repeal of the farm laws and a time-bound Joint Parliamentary Committee probe into the “shocking revelations” made in the leaked Arnab-Partho WhatsApp chats, particularly with regard to the Pulwama terror attack, the Balakot air strikes and the alleged TRP manipulation scam.

Rahul will be in Tamil Nadu again tomorrow on a visit to Coimbatore and Tirrupur. A visit to his Lok Sabha constituency, Wayanad in Kerala, is also being finalised, a Rahul confidante and CWC member told Outlook. Since a large chunk of the party’s present Lok Sabha MPs – 19 out of 52 – were elected from Kerala (Rahul included), the Congress is keen that its former chief spearhead the party’s poll campaign in the southern state to amplify his message of ‘the Congress speaking up for the South in Delhi to bridge the north-south power divide under the current regime’. The same logic, Congress sources said, applies to Rahul’s Tamil Nadu outreach. The Congress-led UDF alliance is the main Opposition to the ruling LDF coalition of the Left parties in Kerala and results of recent local body polls in the state have indicated that the Grand Old Party may not have an easy road to power. “Losing Kerala will be a huge embarrassment for the Congress… Rahul is very popular in the state and our leaders feel that fighting the state polls with him taking centrestage will benefit us electorally,” said a leader, adding that in neighbouring Tamil Nadu, the party is hopeful of finalizing a “winning alliance with MK Stalin’s DMK very soon without compromising on our position on the ground”.

In Bengal, the Congress will contest the Assembly polls in alliance with the Left parties and though it is largely believed that the BJP is the principle rival to Mamata Banerjee’s ruling Trinamool Congress, the state Congress unit wants Rahul to extensively campaign here, particularly in old bastions of Malda-Murshidabad.

In Assam, the recent demise of Congress stalwart and former chief minister Tarun Gogoi has plunged the party into a leadership crisis at the state level too, party sources said, despite feedback from the ground that the ruling BJP is losing its popularity. “The Congress is not expected to project a CM face in either Kerala or Assam where it’s the main claimant for power due to various reasons… In Assam, like in Kerala, we hope Rahul will lead the campaign and we can settle other internal issues later,” said a party leader.

Sources said this eagerness within the party to push Rahul to the vanguard of its campaign in the Assembly polls is a “calculated risk”. A party veteran said, “Prior to becoming the Congress president in 2017, Rahul had led an aggressive campaign against the BJP in the Gujarat Assembly polls and though we didn’t come to power in the state, we registered our best performance in decades; this time we are hopeful of returning to power in Assam, retaining Puducherry and through a potential winning alliance with the DMK, winning Tamil Nadu too… with some luck, even Kerala may be in the bag. If Rahul leads the campaign, we can settle the leadership issue easily and his personal reservations against returning to the top may also go away.” Secondly, the leader said, “There is no denying that Rahul is the only Opposition leader who has been consistently attacking the Narendra Modi government; within the Congress, even those raising questions on the efficacy of our leadership, haven’t been as vocal against Modi and BJP as Rahul… he is obviously the only choice to lead the party and by being the face of the Assembly election campaign, irrespective of the outcome, this message will go out loud and clear,” the leader said.