Joining forces with the US, Japan and Australia certainly helps India to upgrade its naval facilities as China spreads its footprints across India’s neighbourhood. 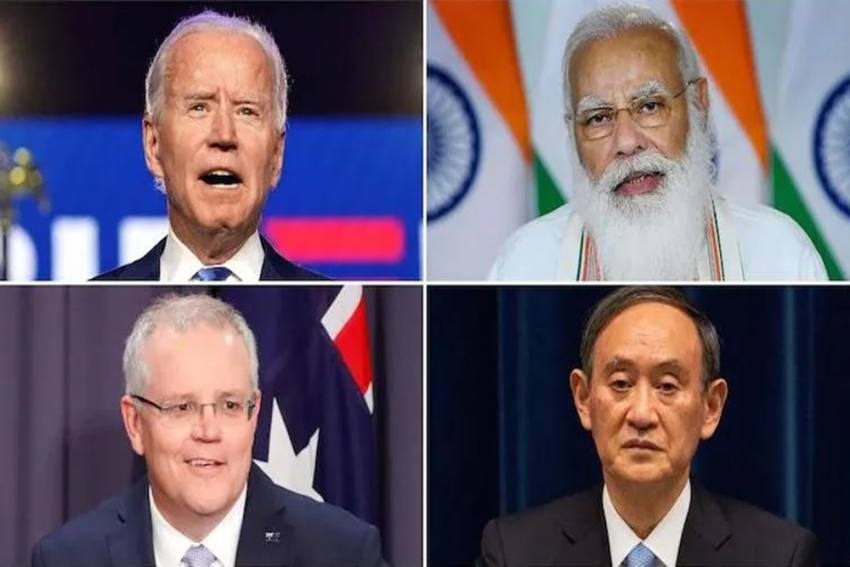 With the quad summit scheduled for Friday, the fledging India, US, Japan, Australia grouping has come into its own.

This will be the first time that leaders of the quadrilateral – Prime Minister Narendra Modi, President Joe Biden, Prime Minister Yoshihide Suga and Prime Minister Scott Morrison will meet, though in the virtual format signalling that the formation is here to stay. There have been several false starts earlier from the beginning when it was initiated after the 2004 Tsunami and formalised in 2007.

But in recent years, the quad has grown, triggered by China’s increasing aggressive moves across Asia it has graduated from senior officials meeting to the foreign ministerial level and now to a full-fledged summit. Though no one will mention China specifically, the quad is seen as an attempt by the four democracies to contain China’s growing military and economic might.

While the Donald Trump administration had made China the focal point, with former US Secretary of State  Mike Pompeo making no  bones about the threat from China during the meeting of the foreign ministers in Tokyo last October.  The Biden administration is unlikely to publicly say so.  But by now everyone understands that a “rule-based free and open Indo-Pacific” is in reference to China’s aggressive manoeuvres in South China and the larger Pacific Ocean.  None of the quad members will acknowledge that it is anti-China, though it was aimed at containing China since the time it was first envisioned by former Japanese Prime Minister  Shinzo Abe.

The quad members insist that it is not a military alliance but a loose framework to ensure that the rule-based order is maintained from the western reached of the Indian Ocean to be vast expanses of the Asia-Pacific. But that is belied by the number of naval exercises that members engage in.  Since 2015, Japan became a permanent in the  Malabar exercises conducted jointly by India and the US since 1992. Last year in 2020, Australia too joined in, making it a full-fledged quad affair. With India having signed the four foundational defence agreements with the US, interoperability between Indian and American defence forces will gather steam in the next few years  making it easier for the two navies to work together in case of a crisis. Australia and Japan both have full-fledged defence agreements with the US, meaning that in case of an enemy attack the US will come to its aid, much like the NATO defence pact between US and its European allies. India and US do not have this kind of a military agreement.

This is where Indian critics of the government fault quad. They say India gains little from becoming part of a group which is primarily concerned about China’s aggressive moves in the South China Sea and the western Pacific. Delhi’s security threat from China is mainly on the land border and has little to do with the PLA navy’s moves in the ocean. Both Australia and Japan face Chinese threats in the Pacific. According to these critics by joining the quad does not serve India’s interest. By allying with the US, India gains nothing more than rekindling hostility with its Asian neighbour. Many point out that China’s moves in Ladakh last year was a result of playing footsie with China’s “enemy”.

However, what these critics miss is the fact that the Chinese navy is now a constant presence in the Indian Ocean. By incorporating the Indian Ocean in the larger Indo-Pacific theatre, is what gives meaning to the quad for India.  The Indian Ocean through which 80 per cent of the world’s maritime trade flows, is one of the most important sea lanes of the world. Chinese fleets, including warships and submarines are in an out of the Indian Ocean waters, in the guise of looking after its growing trade interests.

In 2016, China established its first overseas naval base in Djibouti in the Horn of Africa. The base opened to operations in 2017, primarily to protect China’s security interests away from its shores, mainly in Africa and the Indian Ocean. It is also a fact that China is not the only country with a military base in Djibouti. America, Japan, Italy and several other countries have bases there. Initially China termed its Djibouti base as a logistical facility but now acknowledge it as the first of its “overseas strategic strongpoint”.

China also has the Humbantota port in eastern Sri Lanka, a stone’s throw from the Indian coastline and the Gwadar Port in Pakistan’s Baluchistan province. Joining forces with the US, Japan and Australia certainly helps India to upgrade its naval facilities as China spreads its footprints across India’s neighbourhood. The Indian Ocean is pivotal not just for trade (80 per cent of the world’s maritime trade passes through the Indian Ocean) but for India’s security and strategic interest. Including the Indian Ocean in the broader Indo-Pacific makes strategic sense for India. So critics who believe that India is wasting its time in the quad may have missed a point.