Home Minister Amit Shah said authorities have evacuated about 3.1 lakh people living in the low-lying areas and the NDRF has pre-positioned 52 teams for rescue and relief operations ahead of Cyclone 'Vayu' landfall 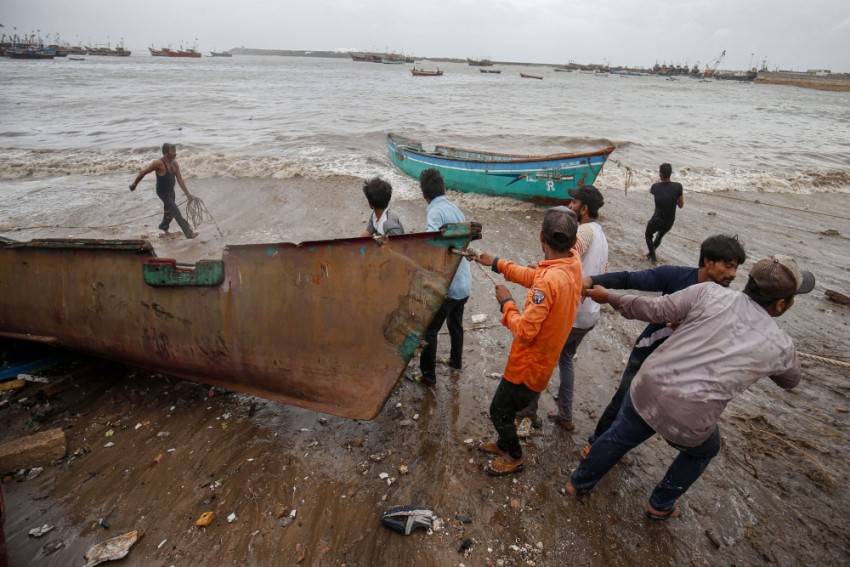 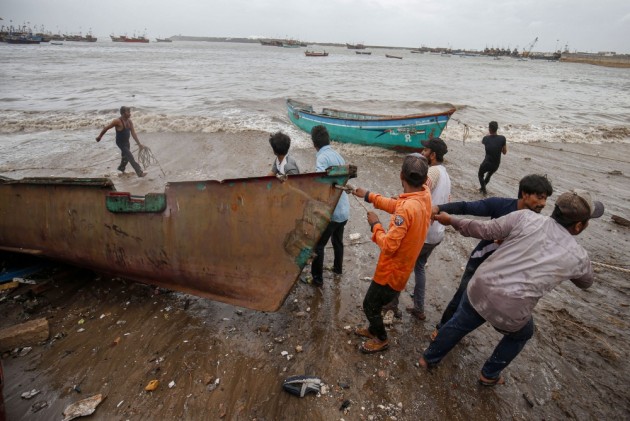 Cyclone Vayu, which intensified into a "very severe cyclonic storm" on Wednesday, changed its course overnight, moving further towards the sea. But the western coast is still on high alert. With strong winds and rough seas expected, the next 24-48 hours are crucial even as the administration remains on its toes.

"It (Cyclone Vayu) may not make landfall. It will only skirt the coast. It has made a small deviation. But, its effect will be there with strong winds and heavy rain," Secretary at the Ministry of Earth Sciences M Rajeevan told PTI.

IMD Additional Director General Devendra Pradhan said the cyclone will remain in the sea and move parallel to the Gujarat coast.

"It has taken a slight westward movement. It will go parallel to the Gujarat coast," Pradhan said.

"It is very likely to move north-northwestwards for some time and then northwestwards skirting the Saurashtra coast affecting Gir Somnath, Diu, Junagarh, Porbandar and Devbhoomi Dwarka with wind speed between 135 and 145 kmph, gusting to 160 kmph from June 13 afternoon," the Cyclone Warning Division said in its 8:30 am bulletin.

Meanwhile, the Army, the Air Force, and the NDRF teams are deployed and put on standby for rescue and relief operations along the coastal districts even as more than three lakh people were evacuated from low-lying areas.

The Indian Coast Guard (ICG) has also deployed ships and aircraft to enable search and rescue post the landfall of the cyclonic storm.

A total of ten columns of the Army each having a strength of about 70 persons -- have been deployed in Jamnagar, Gir, Dwarka, Porbandar, Jamnagar, Somnath, Morbi, Bhavnagar, Rajkot and Amreli, while another 24 columns have been put on standby to carry out rescue and relief operations, a defence release said Wednesday.

Home Minister Amit Shah said authorities have evacuated about 3.1 lakh people living in the low-lying areas and the NDRF has pre-positioned 52 teams for rescue and relief operations.

"Gujarat has evacuated about 3 lakh people and Diu has evacuated over 10,000 people from low-lying areas to safer places...(the) MHA is in continuous touch with state govts/UT and central agencies. The NDRF has pre-positioned 52 teams equipped with boats, tree-cutters, telecom equipments etc," Shah tweeted.

Indian Coast Guard, the Navy, Army & Air Force units have also been put on standby. Aircrafts and helicopters are carrying out aerial surveillance.

The home minister said cyclone Vayu is expected to cross the Gujarat coast between Porbandar and Union Territory Diu and he "prays for the safety of the people".

An alert has been sounded in 10 districts of Gujarat as cyclone Vayu has turned "very severe" and its impact is expected to remain strong for 24 hours even after its landfall Thursday, officials said.

The IAF has also positioned the medium lift and light utility helicopters at nodal points in the state to undertake the disaster relief operations.

A highly mobile deployable radar has been placed at a high state of readiness at Gandhinagar to channelise helicopter operations towards relief and evacuation and establish communication with control centers, the IAF said.

The National Disaster Response Force (NDRF) has deployed 40 teams along the coastal areas of the state and Diu in view of the anticipated landfall of the cyclonic storm. So far, more than 74,000 people have been relocated from the affected coastal areas.

"In addition, six teams each are being airlifted from Patna airport and INS Rajali to Gujarat. This will raise the number to 52 (NDRF) teams in Gujarat (47 teams) and Diu (5 teams) for assisting the local administration in rescue and relief work," it said.

The ICG has dispersed its ships and aircraft at various places to enable search and rescue post the landfall.

"We have positioned our aircraft at Daman and Ahmadabad and the ships at Mundra, Okha and Jakhau. A ship from the western region has also been diverted to North West region for the post-cyclone landfall for providing search and rescue requirement and other emergency developing at sea off the Saurashtra and Kutch region," it said.

The ships and aircraft have been directed to be prepared for any oil spill response by merchant ships in the region," the ICG said.