Ahead Of EU Envoys' Visit To J&K, 'Wall Of Kindness' Springs Up In Srinagar; Police Dismantle Bunkers

Diplomats from the European Union are on a two-day visit to Jammu and Kashmir to assess the situation in the region post the abrogation of Article 370. 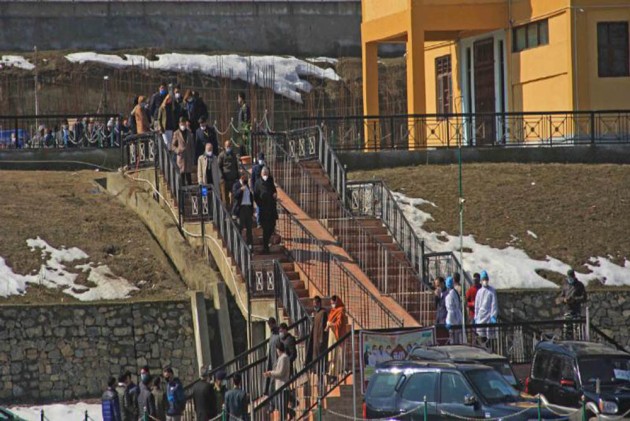 A delegation of 24 ambassadors from the European Union (EU) arrived in Srinagar on Wednesday to assess the situation in Jammu and Kashmir post the abrogation of Article 370.

The EU envoys are on a two-day visit to the Union Territory. In view of the delegation’s visit, strict security measures have been put in place in Srinagar. Police have asked locals not to park their vehicles in public spaces. A vegetable vendor at Srinagar’s Hyderpora chowk claimed that the police didn’t allow him to open his roadside shop, today.

Meanwhile, a "wall of kindness" sprang up, out of the blue on Srinagar’s Gupkar Road. “This has sprung up overnight on Gupkar Road. Perhaps it’s to offer warm clothes to the EU delegation?,” tweeted Safia Abdullah, Omar Abdullah’s sister.

Shops in Lal Chowk and surrounding areas of the city were shut on Wednesday. “We are observing a shutdown to convey the message that all is not well, here,” a shopkeeper in Srinagar said.

Ahead of the envoys' visit, the police on Tuesday dismantled a three-year-old bunker in Srinagar’s Barzulla area.

During their visit, the delegation will interact with recently elected members of the district development council, officials said, adding that the envoys will not meet local political leaders belonging to regional parties such as the National Conference (NC) and People’s Democratic Party.

“They (EU delegation) have not invited us for any meeting. Besides, they have nothing to offer to Kashmiris. If they can return Article 370 and Article 35A to us, I will be the first person to line outside their hotel,” said NC spokesperson Imran Nabi Dar.

Soon after arriving in Kashmir, the delegation was driven to Magam in Budgam district, where the diplomats were welcomed by DDC chairman Nazir Khan and other panchayat representatives.

In 2019, after the abrogation of Article 370, the Centre had facilitated a similar visit for 23 diplomats from the EU.

Last year, envoys from 17 countries, including the US, visited and interacted with locals in Jammu and Kashmir.