A Revolt In Making? Projection Of Palaniswami As Next Tamil Nadu CM Irks His Deputy

Several senior ministers have done the firefighting job for now and placated Deputy CM O. Panneerselvam, but there is very possibility that he might unfurl the banner of revolt some time later this year. 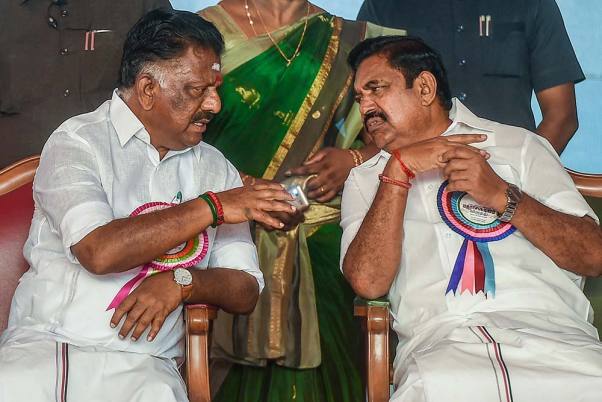 This Indepedence Day was notable in Tamil Nadu for the hectic shuttling by a bunch of senior AIADMK Ministers between the Chennai residences of Chief Minister Edappadi K. Palaniswami (EPS) and Deputy CM O. Panneerselvam (OPS) in desperate peacekeeping parelys after three days of fierce infighting in the ruling party.

The urgent intervention by the top cabinet ministers was necessitated by an unseemly war of words between the EPS and OPS camps sending fears amongst AIADMK cadres that the party was on the verge of implosion with just ten months to go for Assembly elections. As the supporters of the top two leaders looked set for a prolonged war of words, the AIADMK found itself in the midst of an unnecessary turf war.

Trouble started a few days back when Dairy Minister Rajendra Balaji tweeted suddenly that the AIADMK would face the coming elections by projecting EPS as the Chief Ministerial candidate. “EPS is permanent Chief Minister and we will win 2021,” he had declared with chutzpah. This irked OPS and his supporters who saw this as an attempt to weaken his position in the party and the government though he was the co-ordinator of the party. He also saw it as a brazen attempt to force his hand into accepting EPS as the CM candidate.

Even as two other Ministers tried to calm the waters by asserting that the Chief Minister would be decided by MLAs after the elections, yet another junior Minister – Kadambur Raju, Minister of Information and Publicity – pitched in saying the AIADMK will contest the 2021 elections only by projecting EPS as CM candidate. Furious supporters of OPS responded by pasting hundreds of posters in his Theni district on the night of August 14 with the words - “TN’s Permanent CM” and “#2021 CM FOR OPS” (sic).

During the I-Day celebrations in Chennai, OPS is said to have taunted two senior ministers close to the Chief Minister with the remark, “Did you see the response from Theni?” in a veiled reference to the posters. Realising that the war of words was going out of control, five senior ministers descended at the official residence of OPS seeking to placate him. But OPS exploded at them by alleging that the 'EPS for CM' pitch by the Minister Rajendra Balaji was nothing but the handiwork of the CM’s son Mithun and the party’s electoral adviser Sunil. “Are you testing the waters using two young kids?” he had asked them angrily.

The ministers then drove to the CM’s residence, a few hundred meters away, and conveyed the source of OPS’s irritation. They also urged him to keep the two ministers – Balaji and Raju – under check so that situation would not get out of hand. They drafted a statement that urged ‘all sections to refrain from any unilateral statements and warned violators of severe action’ and got it signed by OPS and EPS and released it to the media. “We might have put out this fire but we do not know who will light up the next one,” said an exasperated senior minister.

OPS might have cooled down for now but there is very possibility that he might unfurl the banner of revolt some time later in the year citing governance issues and corruption in the administration. The deputy CM has not missed noticing how EPS has been on a carefully calibrated image building exercise with regular tours to districts under the guise of reviewing development projects and the war against coronavirus. EPS has used these official visits to project himself as the commander-in-chief by making important announcements. EPS has not only proved to be a survivor but has also grown with the job and has emerged into a leader and is being projected as “a simple leader”.

Though being much senior to EPS and having been Chief Minister thrice – twice during Jayalalithaa’s time and once after her demise – OPS has been unable to relish the rise of EPS as the “accidental Chief Minister” and his gradual consolidation in that position. Supporters of OPS have been urging him to split the party again and join hands with Rajinikanth ahead of the 2021 Assembly elections.

The dominance of Sasikala and her family over the AIADMK weakened only after OPS revolted against her in February 2017 which also culminated in her being sent to jail in the wealth case by the Supreme Court. Even CM EPS quickly disowned her and her nominee TTV Dhinakaran, thus freeing the AIADMK from the stranglehold of the Mannargudi family. Sasikala’s release, expected later this year, could provide another opportunity for OPS to assert himself as the only safeguard against the return of Sasikala’s influence on the AIADMK. His next revolt could coincide with the return of ‘Chinnamma.’