21 Babies Born On Board Shramik Special Trains Since May 1

So far, the railways has run around 2,050 Shramik Special trains and these births, many officials said, provided a ray of hope to all in these difficult times. 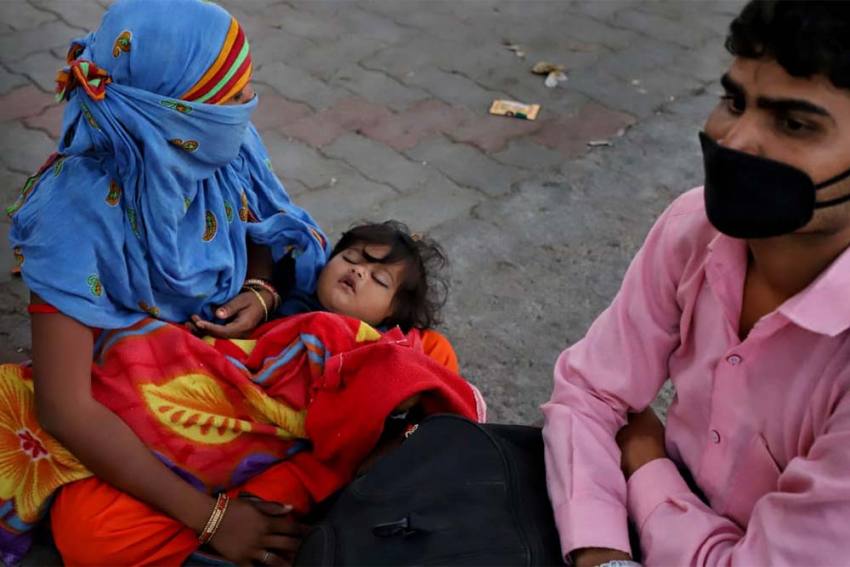 A family of migrant labourers waits for transport back home with their child at Anand Vihar bus terminus in New Delhi.
Suresh K Pandey/Outlook
PTI May 22, 2020 00:00 IST 21 Babies Born On Board Shramik Special Trains Since May 1

Mamta Yadav boarded a Shramik Special train on May 8 at Gujarat’s Jamnagar. She was travelling single. But, by the time her destination station in Bihar arrived she had a companion in her arms.

Since Shramik Special trains started operating on May 1, they have witnessed births of 21 babies onboard, officials say.

Mamta had decided to board the train in very difficult times: everybody was battling a coronavirus outbreak, her husband had lost his job as a factory worker in Jamnagar due to the lockdown, she was in advance stage of pregnancy and the home was hundreds of kilometers away.

But she made the tough choice, and on May 8 decided to take the Jamnagar-Muzaffarpur Shramik Special train to be with her mother at her village in Chhapra district of Bihar for the birth of the baby.

Officials say the train left the Jamnagar stations at 8 pm. Mamta, 35, began to experience the labour pain around midnight.

Though the Railways had said that Shramik Special would be non-stop, this train was stopped at the Agra Fort station so that she could get the medical attention she needed.

Officials said that doctors were alerted by the onboard staff as the train approached Agra Fort station around 4.30 am.

Mamta’s compartment was turned into a labour room of sorts with other passengers moving out. A team of doctors along with railway staff supervised Mamta’s condition as she delivered a healthy baby girl, an official said.

"We have a well-oiled system to deal with medical emergencies,” said railway spokesperson RD Bajpai.

“Whenever a passenger needs help, our onboard staff alerts the station where medical aid is available next and the doctors who live in railway colonies around the station are always there to deal with any emergency,” he said.

“We are happy that we managed to provide help in time every time and in each case the baby and the mother have been healthy,"

Mamta and her little one were allowed to continue their journey, officials said.

On May 13, the 20-something Pinky Yadav gave birth to a baby boy on board the Ahmedbad-Faizabad Shramik Special train with the help of RPF personnel. She got the medical attention at the Kanpur station.

But she had to be shifted to a district hospital for treatment.

The 23-year old Ishwari Devi gave birth to a baby boy on board the Habibganj-Bilaspur migrant special train on May 17 with the help of onboard staff and other women passengers.

The Railways not only provided her the necessary medicines but also arranged for her admission to the Chhattisgarh Institute of Medical Sciences when she needed further care.

"We try to provide as much help as we can,” said Bajpai. “At times these people are so keen to go home. We also advise them the dos and don’ts, give them medicines and allow them to continue their journeys.

"We also provide them ambulance to ferry them to the nearest district hospital. However, one thing must be told. The mother nature takes care of most of it. We are just glad our staffers were there to help,".

So far, the railways has run around 2,050 Shramik Special trains and these births, many officials said, provided a ray of hope to all in these difficult times.

The co-passengers, onboard staff and fellow travelers clapped, cheered and whistled to welcome the newborn into the world, officials recall.