Around 20 people are feared to have died in the incident while 21 have been rushed to hospital, police said. 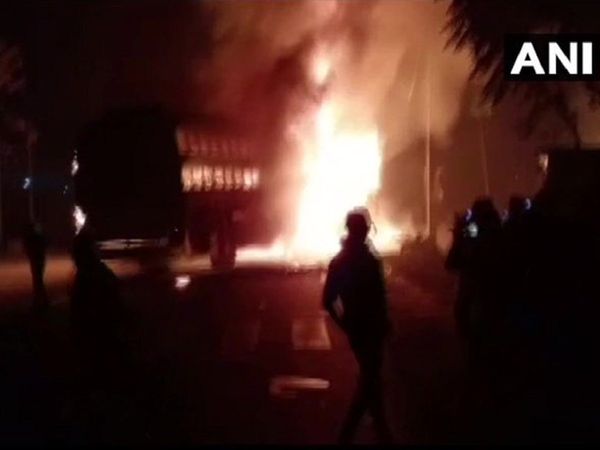 Around 2O people were feared killed on Friday in a massive fire that broke out following a collision between a private sleeper bus and a truck near Chiloi village under Chhibramau police station area in Uttar Pradesh's Kannauj, police said.

Around 20 people are feared to have died in the incident while 21 have been rushed to hospital, Kannauj Superintendent of Police Amrendra Prasad singh said.

Ten to 12 among the injured 21 jumped from the burning bus to save their lives, the SP said, adding the exact number of casualties will be known only later.

There were around 45 passengers in the bus which was on its way to Jaipur from Farrukhabad at the time of incident, police said.

Chief Minister Yogi Adityanath has rushed his ministerial colleague Ram Naresh Agnihotri to the spot and sought a report from the DM Kannauj about the incident.

The chief minister announced an ex-gratia of Rs 2 lakh to the next of kin of those who lost their lives and Rs 50,000 to the injured.

It is a very unfortunate incident, the CM said, extending his condolences to the bereaved families.

PM Narendra Modi took to twitter to express condolences: "Many people have lost their lives in this accident. I express my condolences to the kin of the dead, and wish the injured recover soon."

Kanpur's range Inspector General of Police Mohit Agarwal said 21 people have been rescued and admitted to hospital and efforts are on to contact family members of the victims.

There are chances of casualties in the incident, police said.

The blaze has been controlled and rescue operations are on, Agarwal said.

Uttar Pradesh police chief O P Singh in Lucknow said it appears that the diesel tank exploded under the impact of the collision and the bus burst into flames.

Our first priority is to rescue passengers safely and senior officers are present at the spot, DGP Singh said.

Chief Minister Yogi Adityanath has asked the DM and SP  to rush to the spot and provide all possible medical attention and help to the passengers of the bus.