Mohammad Usman, who belongs to Bijnor in Uttar Pradesh and was on a two-month duty at the Tablighi Jamaat Markaz at Hazrat Nizamuddin, Delhi, was instrumental in convincing Jamaat volunteers to donate blood plasma. 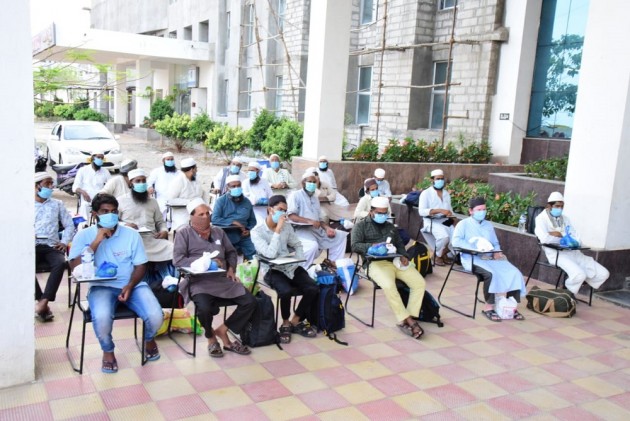 Some 150 members of the Tablighi Jamaat in Delhi have broken their Ramzan fast to donate blood plasma for the treatment of Covid-19 patients, members of the religious organisation that was roundly criticised for being a super spreader of the Coronavirus in the country, have told Outlook.

The donation of plasma is taking place at the three quarantine centres in Delhi, said Dr Mohammad Shoib Ali, who is coordinating the plasma collective drive on behalf of the Delhi health ministry. Since it is mandatory to eat before donating plasma, the Tablighi Jamaat donors are breaking their fast for the day on being advised by community elders that such a such a 'disruption' to save lives was allowed in Islam.

Sadiq Pasha, a jamaat volunteer from Namakkal in Salem district in Tamil Nadu, was among those who donated plasma despite keeping fast on Monday. “I was on Roza today, but I had to break it as a donor is made to eat something before he could donate blood plasma.,” Pasha, who has a welding store in Namakkal, told Outlook.

Community elders have informed Pasha that he could fast an extra day later to make up for not fasting on Monday.

Mohammad Usman, who belongs to Bijnor in Uttar Pradesh and was on a two-month duty at the Tablighi Jamaat Markaz at Hazrat Nizamuddin, Delhi, was instrumental in convincing Jamaat volunteers to donate blood plasma.

Dr Sarfaraz Ahmed is spearheading the donation drive at the Narela quarantine centre. “There are about 950 people, including 650 from Tamil Nadu, at this centre. They initially declined to take the Covid-19 test. Then, ADM Tanvir Ahmed approached me and, along with the help of a couple of others, I convinced these people to take the test. So far, 120 jamaat volunteers have donated blood plasma in the last three days. These include some foreigners too,” Ahmed said.

However, some incidents of mismanagement have come to the fore at the quarantine centres. Some of the donors confessed that they were not aware whether they qualified as plasma donors. Under the rules, people who have tested negative twice after being initially tested positive for the virus are eligible for plasma donation.

“I was tested thrice, but I was never given any reports or told anything about the tests. But, today, my name was announced that I should come forward and donate plasma. I had kept fast today, but since it is a noble cause, I readily agreed to donate. But by doing so, my fast was broken. I will have to keep one day’s fast later in lieu of today. All that is fine. But the doctors should have given me my reports,” a Tablighi Jamaat volunteer at the Narela quarantine centre who didn’t want to be quoted told Outlook.

The other problem some people in Delhi quarantine centres are facing is that they are not being allowed to go home despite having tested negative all along. In spite of the Delhi government giving certain relaxations to the lockdown rules, these people are still confined to their quarantine centres, with no doctor or government official ready to explain the delay, said Delhi’s Shamsul Arafin, a Jamaat volunteer, who is lodged at the Sector 16, Dwarka, quarantine centre.

“I have tested negative in successive tests. They told me to be ready to go home on April 14. But they tested me, and others, again on April 14 and the reports came on April 18. Some more people were diagnosed positive, and 116 people, including me, have tested negative. But I am still here, along with my wife. I live in old Delhi, and I could have been allowed to go home. My children are waiting for us at home. When I ask the doctors and the staff, they say unless there is an order from the top, they won’t let us go,” Arafin, 48, told Outlook.

Similar complaints are coming from the Narela quarantine centre. But Arun Kumar Jha, currently posted at the plasma collection centre in Narela as OSD to DM (north district), says the Central government has a policy to send all the quarantined people home. “These people are from various states and no transport is running at the moment. Besides, the lockdown has been extended by two weeks. So, even if we allow them to go, how will they go, as the lockdown is in force? Some special arrangement would have to be made, and that will take some time. There are issues like crossing states, maintaining social distancing in buses, checking protocol at their destinations, quarantine etc.,” Jha, a joint director, woman and child development, told Outlook.

Among those in quarantine are many foreign nationals who had come to attend a programme at the Nizamuddin Markaz in March. But when a three-week national lockdown was announced at a four-hour notice on March 25, they found themselves nowhere to go, as the public transport also came to a halt. Later, they were quarantined at different centres in Delhi, where they are now having food and language problems. These jamaat volunteers, including women, are from Thailand, Indonesia, and Malaysia.

Delhi is among the few states where people can donate blood plasma. In many states, the central government has not granted permission for the same. Tamil Nadu is one such state where 450 Jamaat volunteers have registered themselves to donate plasma, but the state still hasn’t received the Centre’s permission to collect it.

The Tablighi Jamaat was accused by some as being primarily responsible for the spread of coronavirus in the country after hundreds of their members tested Covid positive after attending a congregation in Delhi's Nizamuddin. That so many of their members were positive gave certain sections to communalise the pandemic, calling it Tablighi Virus.