Indian hockey continued to suffer at the hands of its administrators who experimented with the team throughout the year but without any success. 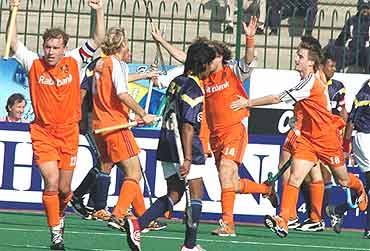 Controversies had their major share as Indian hockey continued to suffer at the hands of its own administrators who experimented with the team throughout the year but without any success at all.

Unceremonious removal of Rajinder Singh, appointment of the first-ever foreign coach, Gerhard Rach, omission of mercurial striker Dhanraj Pillay from the Olympics probables' list and his subsequent recall in the wake of a public outcry, positive testing of Tejbir Singh for a banned drug and Sports Ministry's rapping of the IHF -- the game saw it all in just one year.

So it were the off-field antics rather than on-field performances which hogged the limelight in the Olympic year.

The fortunes of the team, struggling to retain its place among the top in the world, slumped further despite the appointment of Rach.

The German's appointment came after the Indian Hockey Federation sacked Rajinder under controversial circumstances just before the start of Olympic Games in Athens in August, but the German failed to arrest the sliding fortunes of the side that ended the year without a single title.

The women and junior teams, on the other hand, had a slightly better year in comparison as they clinched the Asia Cup titles in their respective categories for their only triumphs in the entire calender year.

In contrast to last year, when the men's team won almost all the tournament they played in, 2004 saw the side failing to win even a single event even though it did manage to beat teams like Ireland and Belgium in Test series. The worst performance came in the Olympics where the team lost against teams like New Zealand to finish a dismal seventh.

If the year started disastrously for the team, the Indians finishing last in the Azlan Shah Cup in Malaysia, it also ended on a hugely disappointing note -- a fourth place finish in the Champions Trophy in Lahore.

In between the side did hardly anything noteworthy besides being in the news for all the wrong reasons.

Rajinder, who was given the senior team's charge in 2002 after Cedric D'Souza was sacked mid-way through the Malaysia World Cup, was removed in almost similar fashion.

Rach, who was Rajinder's deputy in the four-nation tournament in Holland before the Olympics, took over just two weeks before the mega event and not surprisingly, the IHF kept the reasons for Rajinder's removal only to itself.

When Rach was appointed, the Federation came up with claims that the foreigner had the expertise to ensure India a podium finish in Athens, but that was not to be as the eight-time gold medallists were knocked out of the medal race half-way through the competition.

The debacle prompted IHF to vent its ire towards senior players and ignored them for the eight-match Test series between India and Pakistan that followed the mega event.

In the absence of Pillay, Baljit Singh Dhillon, Deepak Thakur and Gagan Ajit Singh, India played with a completely new forwardline in the first-ever series between the arch-rivals in five years and not surprisingly they lost 4-2 despite a good show by some of the young members of the side under captain Dilip Tirkey.

The seniors failed to make a comeback as the IHF decided to play a waiting game and India, who got a place in the Champions Trophy by default, went to the elite six-nation contest with the same team that had played against Pakistan.

India made the grade after Olympic champions Australia pulled out citing security reasons, but they could not make an impression, losing four of their six matches to finish outside the medal bracket.

The lackadaisical approach of the IHF could be blamed for the team's dwindling fortunes as the powers-that-be seemed to have failed to identify the problems crippling the national game.

The IHF even got a rap from the then Sports Minister Vikram Verma over its selction policy following which the Federation set up a selection committee.

But even that failed to improve things which was evident from the comments of the incumbent Sports Minister Sunil Dutt who said recently "It seems no one is happy (with the functioning of the IHF)." But amidst all the gloom, there was a silver lining as well.

Upsetting all predictions, the women's team lifted their first-ever Asia Cup title at home although they lost all other tournaments played throughout the year.