Even though England have lost Vaughan, Trescothick and Jones before the Nagpur Test, the tourists have a pace battery that can trouble the in-form Indian batsmen. 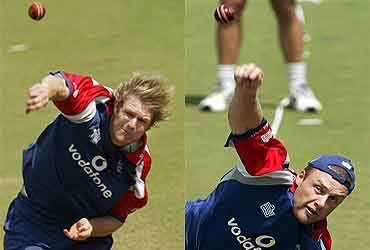 Test matches are won by bowlers. Even though England have lost Michael Vaughan, Marcus Trescothick and Simon Jones before the spin of the coin for the Nagpur Test, the tourists have a pace battery that can still trouble the in-form Indian batsmen. In Steve Harmison, Matthew Hoggard, Liam Plunkett, James Anderson and Andrew Flintoff, the Englishmen have an attack that is still capable of taking the required 20 wickets.

However, the weak link in England's bowling is the spin department. In the sub-continent and especially in India, the touring teams have to have, at least, one quality spinner as the wickets usually assist the slow bowlers.

Pakistan won four Tests on their last three tours of India courtesy its magician spinners, Iqbal Qasim and Tauseef Ahmed in 1986, Saqlain Mushtaq in 1999 and Danish Kaneria in 2005. It is an amazing contrast to the fact that from 1986 onwards, Pakistan produced the most feared and match-winning fast bowlers in Wasim Akram, Waqar Younis and Shoaib Akhtar.

England have Shaun Udal and an uncapped Monty Panesar who has played just 29 first-class matches for Northamptonshire. In this background, England's decisive blow is not the absence of Trescothick or Vaughan but the hip injury to Ashley Giles.

Giles is not only a good turner of the cricket ball but also has the arm ball that he so intelligently uses. He was also the principle character of England's ploy against Sachin Tendulkar on the previous tour when he kept bowling outside the leg stump to successfully frustrate and contain the flow of runs from the little master's wood.

Since I haven't seen Panesar, I would not like to comment on his potential but still believe he must be good and that's why he is in the England squad.

I would certainly advice the Indian batsmen not to rush in showing disrespect or complacency against Panesar -- a mistake which we made against Giles in the 2000 home series when he made his maiden tour with England. Giles claimed 17 wickets on that tour and most importantly spoiled our unblemished record at the National Stadium in Karachi where we lost by six wickets.

Coming back to the England pacers, all of them are of different class. Late last year in Pakistan, we saw Harmison bend his back more to extract the extra bounce that regularly unsettled the Pakistani batsmen while Hoggard was more dangerous with the new ball due to his ability to swing it both ways.

With the old ball, Flintoff was more effective not only because he had the pace but also because he started to reverse the ball that becomes a lethal weapon when combined with pace. Plunkett showed promise in the one-dayers whereas the Pakistan team fan-club have still not forgotten Anderson's match-winning spell at Newlands in Cape Town in the 2003 World Cup, although he didn't come to Pakistan.

Against this England bowling, I have a suspicion that Virender Sehwag might find it a little hard to score as freely as he likes for the simple reason that these English bowlers are more disciplined, bowl straight and don't like to misuse the fresh red cherry.

I am specifically talking about Sehwag because his presence in the centre always puts turbo on the scoring-rate. Rahul Dravid, Tendulkar and VVS Laxman, we all know, are as technically correct as a batsman can be and, therefore, will make the bowlers work hard to get them instead of them gifting away their priceless wickets cheaply.

I was particularly pleased with the improvement the Indian pacers showed in Pakistan. Irfan Pathan was more devastating with the new ball and he showed that in the Karachi Test. The real impetus the bowling has received is in the shape of young Sreesanth and Rudra Pratap Singh.

England's batting has definitely become fragile and inexperienced in the absence of Trescothick and Vaughan, which means there would be more pressure on Andrew Strauss, Kevin Pietersen and stand-in captain Flintoff. In Pakistan, Strauss played extremely well and so did Pietersen and Flintoff.

But Pietersen and Flintoff showed arrogance in their batting when they tried to hit everything out of the park. To me, England lost the first Test at Multan after taking a 144-run lead because of Pietersen and Flintoff who holed out to Kaneria and Shoaib Akhtar respectively while attempting big shots at a time when the tourists were cruising nicely in pursuit of 198.

Therefore, a deep mid-wicket is a must when Anil Kumble and Harbhajan Singh bowl at them.

When we talk about handling the pressure, both the teams didn't do well in that area against Pakistan. Indian batting lasted five sessions in Karachi and was dismissed in two sessions in Bangalore while England crumbled in their second innings at Multan in little over two sessions and same was the story in Lahore.

In a nutshell, barring the pace attack, India has the cutting edge in fielding, batting, established leadership and most importantly, fitness. But the bottom line is that India will have to show the same tenacity, determination, grit and commitment that helped them leave Pakistan licking their wounds in the one-day series.

India are probably the hardest team to beat at home but their worst enemy in their backyard has always been none other but themselves.