The Delhi High Court sentenced to life imprisonment 16 ex-policemen for killing 42 people in the 1987 Hashimpura massacre in Meerut. 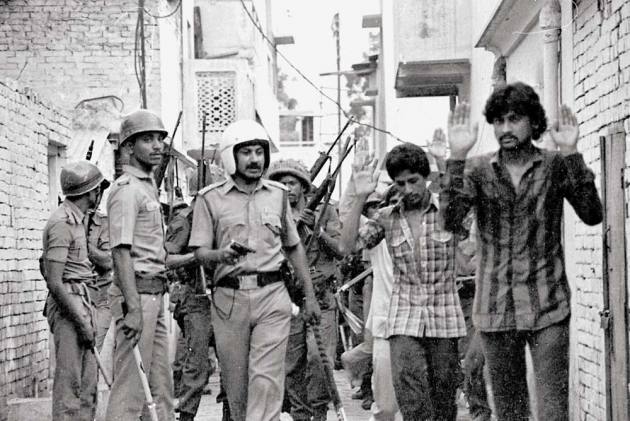 In doing so, the court set aside a March 2015 the trial court verdict giving the 16 PAC personnel the benefit of doubt and acquiting them.

A bench of Justices S Muralidhar and Vinod Goel reversed a trial court's verdict which had acquitted the accused.

The victims were shot by the accused personnel and their bodies thrown into a canal, it had said, adding 42 persons were declared to have perished in the massacre.

The charge sheet was filed before the Chief Judicial Magistrate (CJM), Ghaziabad, in 1996.

19 people were named as accused and charges for offences of murder, attempt to murder, tampering with evidence and conspiracy were framed against 17 of them by the court in 2006 after the case was transferred to Delhi on a Supreme Court direction in September 2002.

It was termed the massacre "targeted killing" of unarmed and defenceless persons by the police.

The killings took place during a riot in Meerut when the victims were picked up from the Hashimpura neighbourhood by the 41st Battalion of the PAC during a search operation.

The High court had on September 6 reserved its verdict on the appeals filed by Uttar Pradesh, the National Human Rights Commission (NHRC) and some private parties including a survivor of the massacre, Zulfiqar Nasir.

It had also reserved its judgement on BJP leader Subramanian Swamy's plea seeking further probe to ascertain the alleged role of then Minister of State for Home P Chidambaram in the case.

The court had on February 17, 2016, tagged Swamy's plea with the other petitions in the matter.

On March 21, 2015, a trial court had acquitted the 16 former PAC personnel giving them benefit of doubt, saying their identification could not established due to lack of evidence.

Nineteen people were named as accused and charges were framed against 17 of them for offences of murder, attempt to murder, tampering with evidence and conspiracy, by the court in 2006.

The case was transferred to Delhi on a Supreme Court direction in September 2002 following a petition by the families of the massacre victims and survivors.

Of the 17 accused, 16 were acquitted while one died during the trial.

The NHRC has intervened in the matter seeking further probe into the massacre in the Hashimpura locality of Meerut in Uttar Pradesh.

A trial court had on March 8, 2013, dismissed Swamy's plea for further probe to ascertain the role of Chidambaram, who was a Union Minister between 1986 and 1989, in the incident, saying he has no locus standi and it is only the police who can move an application for further probe.

Thereafter, Swamy had approached the high court with the appeal.