'I had a very good start and had a very good pace. Unfortunately, the car stopped apparently because of an electrical failure. It is really a pity as I was going very well all weekend.' 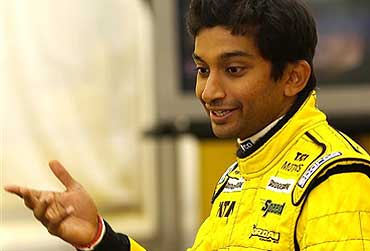 A frustrated Narain Karthikeyan rued his failure to make use of a "good start" at the British Grand Prix where he was done in by an electrical failure on the 11th lap.

"I had a very good start and overtook (Felipe) Massa but unfortunately he was able to repass me at Becketts," Karthikeyan said after the race.

"However, I had a very good pace and I managed to run with the pack of Massa, (David) Coulthard and (Nick) Heidfeld. Unfortunately, shortly after, the car stopped apparently because of an electrical failure," the Jordan driver said.

Massa finished the race at the 10th place, Heidfeld 12th and Coulthard 13th.

"It is very frustrating, as it is the second weekend in a row that I am experiencing some problems with my car, although I managed to finish the race in Magny-Cours. It is really a pity as I was going very well all weekend."

Adrian Burgess, Jordan's sporting director, said though the Indian was doing a "fantastic" job, luck was not on his side.

"Poor Narain, again he did not have any luck in the race. As always, he was doing a fantastic job keeping up with Massa, until we had an electrical failure, which shut the engine off and forced him to retire the car.

The retirement was a huge disappointment for Jordan whose headquarters lies just across the Silverstone circuit.

Meanwhile, Montoya registered his fifth race win and teammate Kimi Raikkonen took the last place on the podium to make it a spectacular performance by McLaren-Mercedes.

Sandwiched between the Colombian and Finn was the Spaniard championship leader Fernando Alonso whose chances of winning was dented after he emerged fraction of a second behind Montoya after both the pit stops.

It could have easily been two Renaults on the podium but Giancarlo Fisichella's engine stalled due to clutch problems in the final pit stop, handing Raikkonen the third place and valuable championship points.

Home favourite Jenson Button of BAR-Honda came fifth while the two Ferrari's of Michael Schumacher and Rubens Barrichello were sixth and seventh.

Ralph Schumacher in a Panasonic Toyota claimed the single point at the eighth place.