The Finn came into Formula 1 as the champion in waiting. And Sunday's race win is perhaps a defining moment in his quest for that crown. 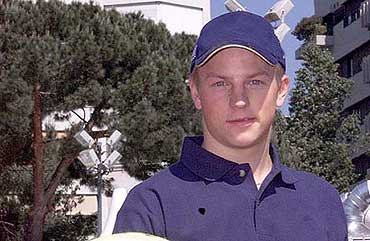 Even as Adam Gilchrist was wading into the Indians in Johannesburg and laying the foundation for their departure, another athlete, in another continent, in another sport, was announcing his arrival on the big stage.

Race car driver Kimi Raikkonen is called the ‘The Iceman’, as much for where he comes from (Finland) as for his demeanour (cool and stoic). On a sizzling Sunday afternoon in Sepang, Raikkonen kept his cool in his silver McLaren-Mercedes, set a scorching pace at the Malaysian Grand Prix, and coasted home to his maiden Formula 1 race win.

It was an emphatic victory all right, but one had to search hard for traces of emotion on the 23-year-old’s face or in his words on his accomplishment. At the post-race conference, Raikkonen, when he wasn’t literally swallowing his own words, mumbled something about it being a good win, something about his race crew doing a good job and a couple more done-to-death sporting clichés  -- but nothing, absolutely nothing that would swirl in the memory or capture the enormity of the occasion. Other than nonchalance, there was nothing visible on that frosty exterior. The Iceman.

Perhaps, in private, after the euphoria had died down, Raikkonen might have let down his guard, smiled unabashedly and said to himself, "This is something". Perhaps, while coasting back to the pits after taking the chequered flag, still strapped in the intimate confines of his car, his mind must have wandered back in time, to around two years ago, to his formative days in Formula 1. He might have thought about the harsh words of his detractors on his early initiation in the sport, and he might have chuckled to himself.

You see, back then, while acknowledging his awesome natural talent to drive fast and with control, they had warned Raikkonen wasn’t ready for the big league. They said that, at 21, he was too young to drive and compete in Formula 1. They said, with just 20-odd drives in the lower rungs of car racing, he was too fresh and inexperienced to bang wheels against some of the best drivers in the world in the pinnacle of motor sport. All things considered, the sport’s governing body gave him four races to prove he belonged in the sport. He needed just one.

In his first race, driving for Sauber, Raikkonen finished sixth. He continued to blossom through his rookie season, and helped the unheralded Sauber team come home fourth -- the best of the rest. Soon, he had been snapped up by McLaren, one of the three front-running teams. He continued to provide generous trailers of his promise during the 2002 season, but consistency -- and race wins -- continued to elude him. Still, most people agreed, it was only a matter of time before Raikkonen started winning races.

Twice, the Finn flirted with luck and botched it up. At the French Grand Prix last year, he was done in by experience, rather the lack of it. Leading Michael Schumacher with four laps to go, he failed to notice the streak of oil on the racing line left by a misfiring car, slipped and ran wide, and let Schumi through. At this year’s Australian Grand Prix, the first race of the 2003 season, when leading Schumacher again and looking set for a race win, he was called in for speeding in the pit lane, and eventually had to settle for third place.

With such blunders piling up on his McLaren dossier, it was little surprise that as Raikkonen was steering his car around the track for those last few laps at Sepang, Ron Dennis, the unflappable team boss, clutched his head in his hands and stole precious glances at the TV screen on the pit wall.

In the end, Raikkonen got his much-deserved maiden win and Dennis was a much-relieved man. Dennis would say after the race: "It’s his first win. I can’t tell you how important a first win is for a grand prix driver. The weight it takes off his shoulders and how much he (Raikkonen) deserves it. It was a faultless drive."

For a race car driver, a first win is an important psychological barrier climbed. It’s a bit like a batsman’s first century, or a striker’s first goal, or a tennis player’s first tournament win. For Raikkonen, who had twice been run-out in the nineties, to continue with the cricketing analogy, it must have been a defining moment in his short career. Still, the question must be asked, does one race victory merit such accolades to be heaped on one so undistinguished and unproven in his profession?

In the case of Raikkonen, it probably does, as the Finn has progressively shown that he has the nuts and bolts to become a world champion in Formula 1. And, given a competitive car, that might just come about in the not too distant future. Right from the moment he stepped into Formula 1, he was earmarked as a future champion, the one who would take the baton from Schumacher Sr, the one who would follow in the slipstream of fellow Finn Mika Hakkinen. This win, and his recent pugnacious drives in Formula 1, are signs of bigger and better things to come for the quiet Finn.

Perhaps, more than Malaysia, it was at the previous grand prix, in Australia, that Raikkonen really showed that he had come of age. Speeding down Albert Park, pursued by the flame red Ferrari of Schumacher, impatient to get through, Raikkonen not only held his own, he took the battle to the German. He rubbed wheels with Schumacher, kissed the kerbs, hustled him into the grass, and came out ahead.

Over the past few years, driving wheel to wheel with Schumacher has come to be seen as the sternest test of character for any Formula 1 driver. Only a handful of drivers have been seen to be unfazed by this duel.

Among the current lot, Juan Pablo Montoya of Williams and Jacques Villeneuve (in a good car); If he wasn’t a Ferrari driver, Rubens Barrichello might also make the cut. By showing that he wasn’t intimidated by the prospect of racing Schumacher on even terms, Raikkonen had made a case for admittance to that league. Defending is one thing, attacking is quite another. It remains to be seen, though, if Raikkonen has got what it takes to overtake Schumacher in a race situation.

Such steely resolve is the reason why Raikkonen is likely to steal a march over McLaren team-mate David Coulthard, who is extremely prolific at picking up the pieces but not so much in creating race victories for himself. A conservative approach like that, bereft of controlled bravado, dynamism and risk-taking, will win points and occasionally races, but not championships. Such a strategy has a hollow ring to it. It’s fitting that, right through Formula 1 history, the hallmark of champions has been their ability to set the pace, intimidate the opposition and manufacture race victories.

With a race win under his belt, much will change in the way the F1 fraternity looks at Raikkonen. Now that he’s broken the victory jinx and is leading the driver’s championship, the team’s expectations from him are bound to increase manifold. No more will he escape scathing criticism for mishaps and mistakes on the grounds that he’s a young man finding his feet. Each time, he straps up on the grid, he’ll be expected to outpace the Ferraris and the Williams. Raikkonen is the sort of guy who strives for that kind of billing.

Raikkonen’s speedy progress and the qualifying-driven shakeouts of the first two races have made this year’s championship the most interesting since the mid-nineties, when Ferrari were playing catch-up with their rivals. It’s still very early days in the year to call it a three-horse race between Ferrari, McLaren and Williams. To even suggest that the reign of Ferrari and Schumacher is over is foolhardy.

Going by the evidence at hand and the performance in the first two races, Ferrari still has the fastest cars in the paddocks and Schumacher remains the quickest driver. And they have something in reserve. Ferrari’s new car, expected to be significantly quicker than the current car, is likely to start burning the race tracks when the Formula 1 circus hits Europe, two races down the line.

This far, the Italian team has been hard done by the fickle weather and rare driving errors. But as the season unfolds, such factors tend to disappear or even out, and therefore one would expect Ferrari to make a strong surge in the points table, and finish another year on the top.

Ferrari remain the favourites, but even they will closely watch their rear-view mirrors for the chasing pack, which has probably found a new permanent member in the silver McLaren-Mercedes of Raikkonen. For this quiet, young man from Finland, who sports a small tattoo of a smiling sun on his right wrist, things are indeed looking bright.