Dejavu: In 1934, Head of Hitler’s Brownshirts wanted his force to replace army as main fighting force of Germany

More from Bharat Bhushan
View All

Rashtriya Swayamsevak Sangh (RSS) Chief Mohan Bhagwat boasted that his organisation could get battle-ready in as little as three days compared to the six-seven months taken by the Indian Army. Bhagwat’s comments reveal that given the right political milieu, the RSS aspires to a formal role in the State.

The typical RSS member looks more like the paunchy grandpas of the BBC sitcom Dad’s Army, than a formidable fighting force. Unfit to fight but full of jingoism in Dad’s Army the middle-aged characters prepare to deal with the fictional contingency of a German landing in South England. As they prepare to hold off an invasion their commanding officer observes with bravado: “It'll probably be the end of us, but we're ready for that, aren't we, men?”

However, Bhagwat’s comments also bring a more sinister image to mind. Of the Stormtroopers (Sturm Abteilung or SA), popularly called the Brownshirts of Adolf Hitler and the Milizia Volontaria per la Sicurezza Nazionale (MVSN, "Voluntary Militia for National Security"), better known as the Blackshirts, of the Italian fascist, Benito Mussolini. The Brownshirts (SA) and the Blackshirts (MVSN) were both paramilitary wings of their respective parties and were given respectability once the fascists assumed power. 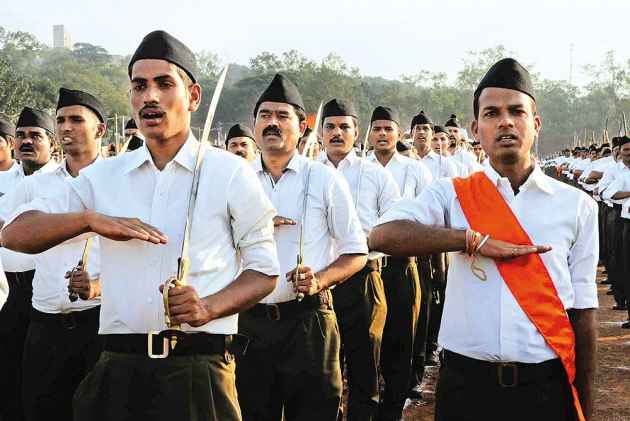 The SA, founded in 1920, played an important role in Hitler’s rise. They marched in military-style rallies and protected party meetings, broke up meetings of the Opposition, and intimidated voters during elections. Its head Ernst Roehm sent a memorandum in January 1934  to the German Army Chief, General von Blomberg, demanding that the SA replace the army as the main fighting force of Germany.

The activities of SA under Roehm were viewed with suspicion by the regular army as he hoped to merge the SA and the army under his leadership. Unsure of the SA’s loyalty, Hitler formed his own personal guard the Schutzstaffel (or SS).

On 30 June 1934 - known as the ‘Night of Long Knives” - Hitler used the SS forces to carry out a brutal purge of the SA as he became suspicious of Roehm who had called for a second Nazi revolution along socialist lines. Hitler ordered the killing of the top SA leadership, including Roehm. In all 80 extra-judicial murders including that of a former Chancellor and some generals took place.

In the aftermath of the bloody purge, the downsized SA remained an instrument of violence and trained the German Home Guard from 1939. The SS, on the other hand, became much  more important. One of its wings was used for enforcing the Nazi state’s racial policies, the other known as the Waffen-SS or armed SS, constituted the combat units of the German Army, and a third wing took over the running of the concentration camps from the SA after 1934. Both the SA and the SS were accommodated in security roles by the fascist state. Is this what the RSS also seeks?

The Italian Blackshirts are another example of the fusion of fascist vigilante groups with State forces. The RSS as is well documented was greatly inspired by Italian fascism.

Italian historian Marzia Casolari has documented how Mussolini’s fascism inspired RSS leader B S Moonje. Mentor of the organisation’s founder KB Hedgewar, Moonje made a trip to Italy in 1931. He was deeply impressed with militarisation of schooling under Mussolini. On his return inspired by Italian fascists he adopted a programme of militarising Hindu society The Bhonsala Military School which the RSS apparently uses to train its cadre, was set up by Moonje.

The Italian Blackshirts started in 1919 as ‘action squads’ fighting those whom they considered a threat to the Italian nation. In 1923, the vigilante groups led by nationalist intellectuals, war veterans and landowners were officially constituted into the MVSN, as the private army of the fascist party. Like Hitler’s SA, they were a national, political militia. Once Mussolini came to power, the Blackshirts formally became a part of the establishment and were called the ‘fourth branch’ of the armed forces.

The RSS is a political militia that can be mobilised at short notice – three days according to Bhagwat.

This militia feeds other vigilante groups sharing the same ideology - the Bajrang Dal, the Sri Ram Sene and theGaurakshaks. Each one is summoned for a specific task and its members then dissipate into the cadre of another organisation depending on social, political and ideological contingencies. The ability to apparate into new forms according to circumstance allows the RSS to project itself as a social service organisation helping victims of natural disasters at one time and to appear as the sword arm of Hindutva at another.

In saying that the RSS too can be morphed to become one with the Indian Army, Bhagwat is doing more than celebrating its military ethos. He is deliberately trying to blur the distinction between his Hindu bullyboys and the professional and secular armed forces of the Indian Republic.