What does the conferral of an archaic honour on Salman Rushdie--a visionary and complex writer lamentably transformed into a weak-voiced celebrity--and the ensuing outcry tell us about our times? 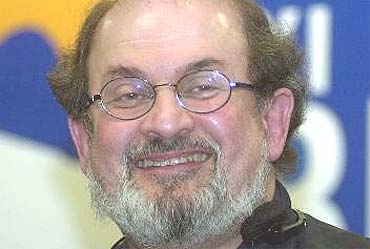 As the cacophony around the conferral of an archaic honour on Salman Rushdie becomes distant noise, two observations hold good. Firstly, Rushdie remains one of the great English-language novelists of the 20th century though his contributions to the genre in this century remain as yet unremarkable. Secondly, those who use offended 'sensitivities' to create political unrest and international incidents deserve little regard. They are no friends of the religion and community they claim to espouse.

Rushdie has deservedly won recognition for his greater works including the 'Booker of Bookers' for Midnight's Children and various European national honours including the Commandeur de l'Ordre des Arts et des Lettre in 1999. He may yet be in the running for a Nobel. No prize comes, of course, without its own political baggage. The Nobel, for instance, tends to single out and honour individuals from non-Western contexts who are regarded as 'oppositional' in their own societies; such criteria aren't usually seen as relevant to European or American writers. Still, the Nobel is usually more focussed on the artist and her work than knighthoods or peerages which are riddled with partisan quibbling, political wranglng, ideological judgements and, in more recent times, simple corruption. At the end of the day, it perhaps matters little that a once-beleaguered writer has accepted a quaint honour from the British establishment and looks forward to his day at the palace garden party wearing white tie and tails. Rabindranath Tagore, no conformist, also accepted a knighthood to the accompaniment of criticism though he later returned it in protest against the Jallianwalla Bagh massacre.

What this 'honour' and ensuing outcry tell us about our times is that a once visionary and complex writer has been transformed into a pallid celebrity, one of the people who are famous mainly for being famous. (Rushdie's recent novels, where he is too busy being a pastiche of himself to actually write well, indicate a preoccupation with celebrity culture). Meanwhile, those claiming to represent hurt Muslim sentiments now resemble electronic puppets--only a provocative push of the button is needed to set off a destructive frenzy. The trap is there. Why walk into it every single time with such co-operative willingness? Perhaps because the people who actually suffer are neither the provocateurs nor the officially provoked but ordinary people who will neither have read the book nor seen the cartoons.

In a piece I wrote for The Guardian last week, I suggested that although Rushdie was no simple neocon, as Ziauddin Sardar and others have claimed, he has certainly become a very different kind of political animal from the one who evoked in brilliant prose, the interconnectedness of all forms of chauvinism and tyranny. His early fiction is populated with monstrous and yet curiously human tyrants from across cultures and contexts, often based on real life prototypes: Mrs Thatcher, Oswald Moseley, General Zia, Ayatollah Khomeini, and Bal Thackeray among others. Satirising the Raj, his novel Midnight's Children is, in fact, an elegy for the betrayal of the liberatory promises of Independence by Mrs Gandhi, famously depicted as 'The Widow' who oversees 'the smashing, the pulverizing, the irreversible discombobulation of the children of midnight'. Rushdie's innovative brilliance here drew on existing literary traditions in the subcontinent embodied in works by Saadat Hasan Manto and Faiz Ahmad 'Faiz' who lamented the 'stained dawn' ('yeh daag-daag ujaalaa') of a blood-soaked Independence for India and Pakistan. Even so, he lamented Mrs Gandhi's assassination as an event that 'shames us all' who are 'Indian by citizenship, or birth, or race'. In Shame, his novel of a place that 'may or may not' be Pakistan, he was at pains to show that shameful events happen everywhere including England: that 'honour' killings and racist violence are shown to be kindred phenomena. In his prolific journalism, he criticised a range of phenomena from anti-immigrant racism to imperialism, fundamentalism, Thatcherism, and censorship.

It can be argued that although Rushdie publicly supported the invasions of Afghanistan and Iraq on ostensibly humanitarian grounds, he has continued to throw his weight behind liberal causes. In 2000 he criticized racist killings by police in New York City, deprecated the Supreme Court's 2001 pursuit of Arundhati Roy and condemned the 2002 pogroms in Gujarat. He satirised Bush's 'victory' in a poem entitled 'How the Grinch Stole America'. He has also, unsurprisingly, spoken out for other writers like himself under siege by fundamentalist forces, Sikh, Hindu, Christian or Muslim. That said, I have failed to find anything by Rushdie that condemns the shutting down of the play My name is Rachel Corrie under pressure from what the 'highly organized attack machinery that will come after you if you express any kind of dissent about Israel's policies,' as playwright Tony Kushner describes it. Nor does he seem to have confronted repeated attempts in the American legislature and university campuses to identify and muzzle 'anti-American' professors and course content.

The fatwa and subsequent relocation to America did put in motion a transformation whereby Rushdie changed gradually from a fiercely principled writer into one who was markedly less willing to be consistently and equally critical of all forms of tyranny. Even when he acknowledged blatant wrongdoing on the part of the Bush administration, his criticism was muted and qualified. A writer who had once spoken of the 'folly' of trying to contain writers within passports now used an insistent and nationalist American 'we' in his newspaper columns (somewhat peculiar considering he had hardly spent any time in that country when he began to use it). This was not so much a subversive 'we' that spoke in the name of the voiceless masses as a pronoun that tended to conflate government, foreign policy and people. The writer who once tried to show how fundamentalists and chauvinists of all kinds were brethren-in-arms now proclaimed without a hint of irony: 'We must send our shadow warriors against theirs, and hope that ours will prevail'. He began theorising and distancing himself from something he called 'anti-Americanism' or 'the savaging of America by sections of the left'. Apparently, to criticise US foreign policy was to not recognise that it is 'individuals' not governments who make history.

More telling is his description of who a fundamentalist is. It is no longer a category that operates across contexts and cultures but one that is clearly geared to identifying Islamists as the main enemy: 'Such people are against, to offer just a brief list, freedom of speech, a multi-party political system, universal adult suffrage, accountable governments, Jews, beardlessness, evolution theory, sex'. As though there are not Jewish fundamentalists also opposed to exactly the same things with the addition of Palestinian existence and rights. Or Christian zealots opposed to all of these things with the exception of beards and procreative sex. Is America a shining example of a multi-party political system and accountable government? Rushdie's list of 'what matters' pays pious lip service to 'a more equitable distribution of resources' while stressing 'kissing in public places, bacon sandwiches and cutting-edge fashion' priorities rather specifc to upper-class metropolitan glitterati. (Could cutting-edge fashion be connected to an inequitable distribution of the world's resources, one wonders?). The Muslim diaspora, Rushdie then opines, have values that are at odds 'with the Christian, Hindu, non-believing or Jewish cultures among which they live'.

Had Rushdie not compromised himself so severely, it would be easier for us to acknowledge the continuing relevance of some of what he says. He has rightly called for a fast-growing version of 'a self-exculpatory paranoid Islam' which blames 'outsiders' for all the ills of Muslim societies to be examined and resisted. He has also called for the 'restoration of religion to the sphere of the personal', a call he might have extended more widely and forcefully to the driving forces in American politics today. Trouble is, what he once undertook in the name of shared human values and goals, he now identifies largely with the West, using culture-specific, parochial terms like 'The Enlightenment' and 'Reformation' to call for change in non-Western contexts and cultures.

Rushdie and his allies in the West need to return to a more wide-ranging critical engagement with the present and with the cultures outside the West which shaped him as a young writer. Equally, so-called representatives of Islam who find only books and images--not poverty, intra-faith violence, shame killings and dictatorial regimes--a source of offense need to stop being such willing puppets for every provocateur, real or imagined, who comes their way. Until this happens, the only winner will be those who espouse the specious but self-fulfilling prophecy of the 'clash of civilisations'.

Priyamvada Gopal, the author of Literary Radicalism in India, is Senior Lecturer of English, University of Cambridge