Are Most Terrorists In India Muslims?

Of course not... But for a Union minister to hold such views as Gospel is frightening and shows how wrong headed the members of this BJP government are. 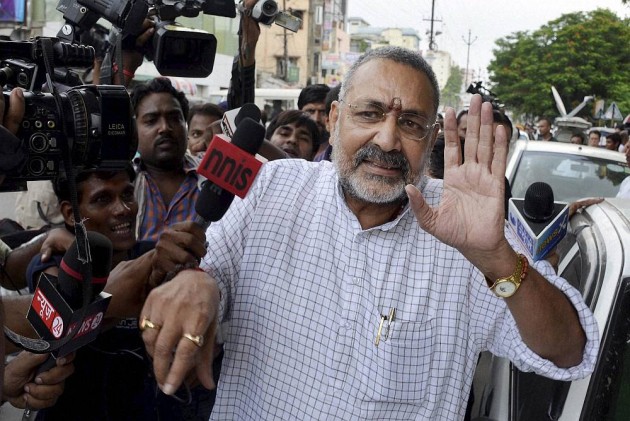 Are most terrorists in India Muslims? I have to chance to look at this following yet another avoidable incident this week.

Nigeria's ambassador to India has responded to a comment made by a Union minister.
The comment was made Giriraj Singh, who said: "If Rajiv Gandhi had married a Nigerian lady and not a white-skinned woman, would the Congress have accepted her leadership?" The remark revealed the casual racism that is so commonplace in India. Nigeria's ambassador OB Okongor was upset enough to say "I believe the prime ninister will do right thing on this. I am not going to lodge protest." The prime minister ignored it, once again as those who have observed his conduct on such things will have noticed, though the media was naturally outraged.

The website rediff.com ran a commentary headlined '5 reasons why Giriraj Singh should shut up.' It included this statement of his from last year: "Isn't it true that all people caught in terrorist activities belong to one community? I am not trying to blame any one particular community. Why are all so-called secular parties silent on this?"

Presumably he means Muslims. He is of course not right in assuming that all people caught for terrorism are Muslims, but are Muslims responsible for most of the terrorism in India? Let's look at the data. The South Asian Terrorism Portal lists fatalities and incidents across India. Quite helpfully, it also does lists them by conflict theatre.

In 2014, there were 976 deaths from terrorism (or extremism, whatever name one wants to use for it) in India. Of these, the most (465) came in the North East. The second most (314) came from Left wing extremism, by a group of people called Maoists. Deaths in Jammu & Kashmir, assuming we want to attribute the whole lot to terrorism, stood at 193. Outside of these conflict theatres, Islamist extremism claimed four lives.

In 2011, Maoist violence claimed 602, the North East 246 and Kashmir plus Islamist violence outside the state stood at 225. This year, again the sequence is the same, though violence levels across India have dropped, as they have been doing for the past decade.As is obvious, most terrorists in India are Hindus, the ones whom we have conveniently labelled 'Maoist' instead of 'Hindu'. The second largest group of terrorists are the tribals, animists and perhaps some Christians, of the Northeast. Muslims are third. If one looks outside the separatism of Kashmir, their violence and terrorism levels are among the lowest in the world and they appear to be lest susceptible to terrorism not just by the standards of the world's Muslims but also India's Hindus.

So what explains Giriraj Singh's statement, which I must confess one hears all the time in India? I cannot remember the number of times I have been informed by someone at a party that "all Muslims are not terrorists but why are all terrorists Muslims?" They're not. Not even close.

The reason is that 'terrorism' is today accepted only that which is Islamist. And the reason for this is the narrative in the media, which has neatly conflated terrorism with Islam and Pakistan. News channels like Times Now run many more programmes firing middle class and Anglicised Indians up against 'terrorism' (ie Islamist/Pakistan) than they run shows on the North East and on Maoism, which claim a far greater number of lives as the figures show.

It is of course unfortunate that this should be the case, but we can explain away the common man using such arguments. For a Union minister to hold them as Gospel is frightening and shows how wrong headed the members of this government are.

I said on a TV show after Giriraj's comment that Modi deliberately chose such unhinged people because they said what he wanted to but couldn't. He agreed with every word Giriraj said and that is why he was rewarded with a ministry. My comment greatly offended the BJP spokesman on the panel, who read out a list of Cabinet ministers who were touched by sobriety, like Sushma Swaraj and Arun Jaitley.

But surely these people pick themselves in any BJP cabinet. They've been leaders at the Centre before Modi. It is the new ministers, like Giriraj and Niranjan Jyoti (famous for referring to non-Hindus as bastards) whom Modi has brought in. And he has done so, as I said, because he agrees with what they say, even though it is manifestly and demonstrably bogus.