A Walk In The Park 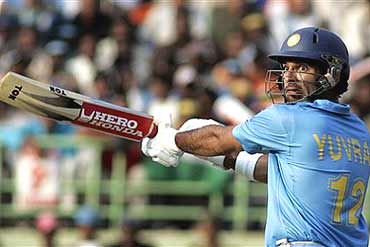 Yuvraj Singh struck a rollicking unbeaten 95 as India provided the final touches to their World Cup preparation by recording an emphatic seven-wicket victory over Sri Lanka in the fourth and final one-dayer to clinch the series with a 2-1 margin.

After restricting the visitors to 259 for seven built around Chamara Silva's maiden century, the Indians relied on a record unbroken 145-run fourth-wicket partnership between Yuvraj and Sourav Ganguly (58 not out) to overhaul the target with as many as six overs to spare.

Yuvraj, who was laid low by a knee injury for nearly three months, proved his fitness and form beyond doubt by unleashing an array of breathtaking shots during his 83-ball knock while Ganguly maintained his sequence of impressive scores which helped the hosts surpass the Lankan total without much fuss on a good batting strip.

Young Robin Uthappa set the tempo for the run chase by blazing his way to a 37-ball 52 and Virender Sehwag also showed signs of returning to form with 46 before he threw away his wicket with some casual running between the wicket.

The series triumph will serve as a morale booster for the Indians before going into the March-April mega event in the Caribbean where they are clubbed with the Sri Lankans in the same group in the preliminary stage.

Put into bat after a delayed start due to a wet outfield, the Sri Lankans recovered from a top order collapse to post a competitive 259 for seven in 47 overs with Silva doing the bulk of the scoring with a heroic unbeaten 107.

The Indians had a solid start to their chase despite Ganguly retiring with cramps in the very first over of the innings.

Sehwag seemed to finally rediscover his touch until he got himself run out in a criminal manner.

Sehwag received some help from the Lankan bowlers who fed him with short-pitched stuff with enough width, and he creamed them with shots all round the park.

Uthappa at number three was at his belligerent best and played a crucial in laying the foundation for the side before falling to Farvez Maharoof.

Dinesh Kaarthick, coming in for the injured Sachin Tendulkar, did not last long and that brought Ganguly back to the crease.

Sehwag cut Lasith Malinga to third man and took a casual stroll half-way through his run. Worse still, he forgot the basic requirement of completing his run and started a mock batting practice at the non-striker's end.

Wicketkeeper Kumar Sangakkara was alert to spot Sehwag's carelessness and had all the time in the world to take the glove off one hand and aim a direct hit at the stumps.

Yuvraj joined Ganguly in the middle and what began was a fruitful association which saw the two southpaws complement each other with their range of shots. 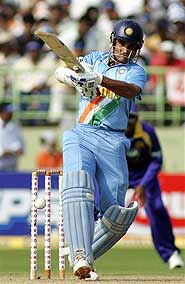 The Punjab batsman slammed 11 fours and three sixes to stamp his class while Ganguly batted sensibly, farming the strike well while latching on to opportunities to play his favourite shots against the spinners.

Earlier, Sri Lanka rode on a maiden hundred by Silva to recover from another top order slump and post a challenging total.

Twenty-seven-year-old Silva justified his inclusion in place of Upul Tharanga by hitting a run-a-ball 107 not out that helped the tourists overcome a faltering batting performance on a benign track.

Silva, playing in his 14th ODI, authored two vital partnerships, first a 68-run stand with Tillekaratne Dilshan (28) and then a 64-run association with Maharoof (28) after the Lankans were reduced to 56-4 and then 165-6.

The right-handed middle order batsman struck 12 fours and a six in his unbeaten knock.

Zaheer Khan and Ajit Agarkar picked two wickets but neither of them were economical while Sreesanth was even more profligate with 1-46 from eight overs.

Attapattu and Sanath Jayasuriya gave Sri Lanka a solid start, making 42 runs of seven overs after being put in.

Jayasuriya even hit Zaheer for a six over the mid-wicket and ensured a run-rate in excess of six an over.

Silva and Dilshan avoided any risk and kept the scoreboard ticking with some sharp running between the wickets.

The duo picked Harbhajan Singh for special treatment. Silva plundered two fours and a six for 17 runs in Harbhajan's second over.

Russell Arnold (22) added 41 runs in 60 balls for the sixth wicket with Silva before he was caught at long on by Sreesanth off Sehwag.