The venom and aggression with which Congress leaders are responding to a simple question first regarding Mrs Sonia Gandhi and now regarding Mr Robert Vadra proves yet again, if any proof were required, that Congressmen and women are convinced there i 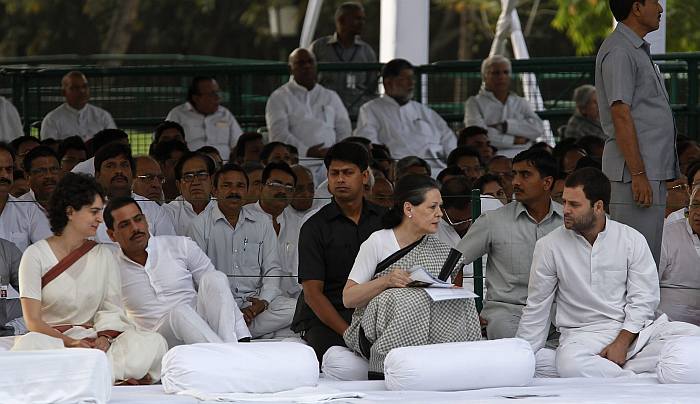 The venom and aggression with which Congress leaders are responding to a simple question being asked first regarding the foreign travels of Mrs Sonia Gandhi and now regarding the magical expansion in the business empire of Mr Robert Vadra proves yet again, if any proof were required, that Congressmen and women are convinced there is a lot to hide. Therefore, they use the entire might of the state machinery to keep everything connected with the party’s First Family as the TOPMOST SECRET of the country.

Two of my Right to Information (RTI) applications regarding the affairs of the first family got steadfastly stonewalled. The first one was regarding the Time Capsule buried by Mrs Indira Gandhi during the Emergency. I approached every possible official agency likely to be in the know with an RTI application, including the Prime Minister's Office (PMO). Each one expressed ignorance about the Time Capsule. My appeal is pending with the Central Information Commissioner.

The second pertains to Mr Rahul Gandhi’s foreign trips. I filed an RTI on April 16, 2012 following a chance meeting with a mid level Congress leader in Delhi—someone I was meeting for the first time. Since there was a lot of media speculation regarding the possibility of Rahul Gandhi joining the Cabinet or take charge of the dwindling fortunes of the party, I asked this gentleman if he and other Congress workers/leaders were feeling enthused by the prospect. I was taken aback when the gentleman replied with fury: “He will have time for the government or the party only when he can spare it from his mysterious lifestyle. He is forever running abroad. He will make a two day high profile visit to some place in India and then no one knows where he disappears for days or weeks on end. No one knows what he does when he goes abroad. Everything is shrouded in secrecy. Rahul ji did not even have time to accept birthday greetings from hundreds of Congressmen who were brought to wish him from faraway places on his birthday. He was in all possibility dancing in some Dubai or London discotheque.” And then he went on to say: “Why don’t you file an RTI seeking information about Rahul’s comings and goings. If you make any headway you will do every one of us a big favour.”

I was truly puzzled by the intensity of anger of this Congressman because the impression given in the media is that Congressmen can’t see any future without the First Family and are anxiously awaiting Rahul to take charge. Unwilling to believe his charges at face value, I decided to actually file an application seeking the following information:

That point No. 1 to 4 pertain to BOI/IB. As per provisions of the RTI Act 2005, chapter 6, section 24(1) and second schedule the Intelligence Bureau is exempted from providing information details on the subject. Point No.5 and 6 do not pertain to BO/IB.

Thereafter, I filed an appeal on the following grounds:

“An RTI was filed under the Right to Information Act 2005 on 16.4.2012 at the office of CPIO. The CPIO responded to the same saying that the IB is exempted from providing any such information and point no.5 and 6 do not pertain to BOI/IB. The IB has not provided the contact details of the Appropriate Authority which has the required information. Rahul Gandhi holds an important public office as the General Secretary of the premier ruling party of India. He is also widely perceived as the prime ministerial candidate of Congress Party in the 2014 elections. It is well known that he exercises a great deal of influence on government policy and decisions, including prime ministerial decisions. Since this information is regarding his past trips and meetings, divulging this information cannot by any stretch of imagination be considered to constitute a threat to his personal or national security. Aggrieved by the decision of the CPIO (dated 21.6.2012), the appellant has come by way of appeal to the Authority.”

Grounds for prayer/relief sought for: CPIO rejected the appellant’s RTI without any sufficient cause or reason. This denial is also discriminatory hence appellant has approached the Appellate Authority.

Enclosure: Photocopies of original RTI application with its enclosures, postal proof of mailing, acknowledgement of CPIO/SPIO and decision letter of CPIO/SPIO.

Even if Mr Rahul Gandhi or Mrs Sonia Gandhi are frequent travellers abroad, why hide it? Worse still, why are Congressmen and Congresswomen are responding with such venomous fury when citizens of this country seek this information?