India can survive poor governance for the next few years but what it cannot survive is the further estrangement of its Muslim minority. 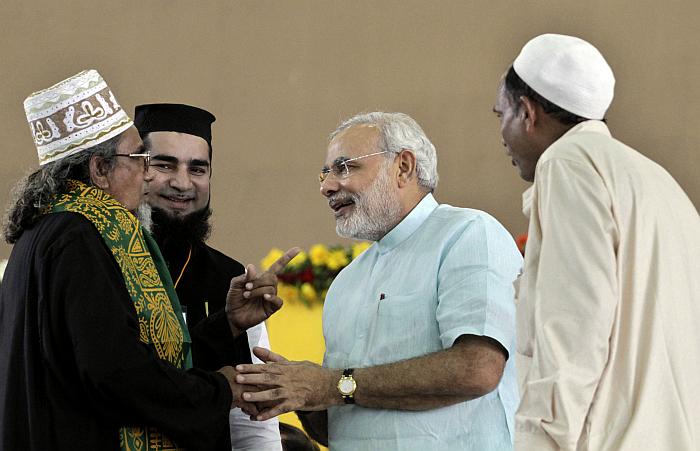 An interesting debate raging across opinion columns in Indian newspapers is whether the Gujarat model—or the ‘Modi miracle’—is real or not. Many critics charge chief minister Narendra Modi with exaggerating the extent of Gujarat’s development and argue that, in reality, its growth rates are similar to other economically advanced states like Maharashtra. Further, they point out that Gujarat has benefited from historical advantages—an entrepreneurial class; relatively good infrastructure; and an extensive coastline—and would have grown irrespective of whether Modi was at the helm or not. Lionized by a deviously clever PR machine and an invidious personality cult, Modi has succeeded in fashioning himself as the face of vibrant Gujarat.

Modi supporters, an impassioned and argumentative lot, opine that India's economic growth is almost inextricably linked to Modi’s journey from Gandhinagar to New Delhi. Modi would, in a few decisive strokes, end the massive corruption and endemic sloth which characterises the UPA government.  They also accuse his critics of bias, claiming that their views are coloured by the 2002 Gujarat riots. They do have a point. For two reasons.

First, it is absolutely true that the majority of Modi critics are biased. They are busy unpacking the Modi model not out of a genuine curiosity to understand what really works in Gujarat (and what doesn’t) but because they have watched with rising alarm how the wily chief minister has metamorphosed into a development icon. Like the cleverest war generals, they pick holes in Modi’s major selling point—Gujarat’s development story—to show that at best he is a pedestrian chief minister with some minor redeeming qualities. So Modi may have built roads, but has it benefited that last tribal in Dang? It is an impossible standard which frankly no leader can meet.

Second, no other politician has received the same degree of scrutiny Modi has. For instance, Bihar’s chief minister Nitish Kumar—beloved of some of Modi’s most ardent critics—has largely flown under the radar with multiple laudatory stories in the national media and minimum scrutiny. So why would Modi receive so much more critical attention than Nitish Kumar who has hardly been shy about the miracle he has apparently wrought in Bihar? There you have it. And if after 50 years of nearly uninterrupted Congress rule, India remains one of the world’s poorest countries, what does it say about its aam aadmi credentials? If mediocrity is acceptable from everyone else, why is perfection demanded only from Modi?

This is not to say Modi hasn’t embellished the Gujarat story or his own role in it. But that is hardly a strike against him. Which politician after all behaves any differently?

So let’s stop this rather silly nitpicking and concentrate on what really matters: The riots of 2002 and Narendra Modi’s role in it. It is true that the Gujarat strongman has not been convicted in a court of law and it is possible that he may entirely escape legal punishment. But it is equally true that 2002 represented a massive administrative and moral failure. Modi’s subsequent actions—whether his inability to apply a healing touch or his attempts to protect the likes of Maya Kodnani—reveal a troubling lack of basic humanism and moral scruples.

The strongest argument against Modi is not the intricacies of the Gujarat model but that he is seen as the face of 2002 riots. He is viewed  as emblematic of India’s unfair treatment of its minorities; a thin veneer of secularism hiding an ugly face of Hindu majoritarianism.

Now, it would be unfair to blame Modi entirely for this troubling state of affairs. Indian secularism often thrives on promoting fear rather than hope but make no mistake about it: There is a real danger of Muslim dissatisfaction with the Indian democracy and Modi’s accession would only further exacerbate it. And it is this environment of grievance and scepticism which promotes the rise of sectarian Muslim parties like the Assam United Democratic Front and Peace Party perhaps reaching its apogee in Akbaruddin Owaisi's alleged hate speech at Nirmal. The findings of the Sachar Committee—disputed as they may be—lend a certain empirical credibility to cries of pervasive discrimination. The average Indian Muslim may oppose some of Owaisi’s more vitriolic comments but would agree enthusiastically with his litany of complaints against the Indian state. Fairly or unfairly, Modi represents the worst of India—its broken promises and its failures, both real and imagined—to the Indian Muslim. With hardened positions on both sides, that perception is almost impossible to change. In that sense, Modi props up both Hindu as well as Muslim communalism—a dangerous and combustible mixture which is sadly ignored by some of his more enthusiastic supporters. India can ill-afford another Muslim League which locates its redemption not in her mainstream parties but in exclusivist and chauvinistic religious formations.

In a multi-ethnic/religious country like India, no leader can perhaps command the support of all communities but he must not attract the implacable hostility of India’s largest minority. For instance, former Prime Minister Atal Bihari Vajpayee may not have enjoyed widespread support among Muslims but was not treated as an enemy either. Call it what you will, but it is this ‘Muslim veto’  which makes Modi unacceptable as India’s next leader. This may disappoint those who place their faith unflinchingly in the power of the individual. But as Pratap Bhanu Mehta has argued, even some of the founding fathers agreed that any concept of citizenship which distances itself completely from religious identity would be untenable in India. Communitarianism is a sociological reality in India and while there is always the danger of it degenerating into narrow sectarianism, its political effects simply cannot be ignored.

Whether it makes Modi unelectable as NDA/BJP’s putative leader is another story. Nevertheless, India can survive poor governance for the next few years but what it cannot survive is the further estrangement of its Muslim minority. Even if the promise of a high Modi-led growth is accepted at its face value, it is simply not worth risking the fraying of India’s multiple fault lines.

Rohit Pradhan is a fellow at the Takshashila Institution. The views are personal.