'We are not questioning Mr Gonsalves's integrity as a lawyer and we hope that we can put this controversy to rest so that the work to try and save Afzal's life can move ahead.' 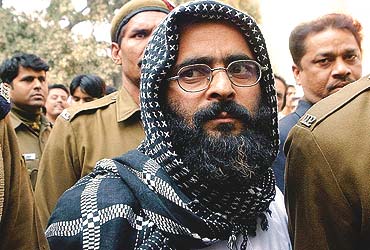 We are deeply shocked by the controversy Mr. Colin Gonsalves has raised at this crucial juncture of the campaign for clemency for Mohammad Afzal. We would like to state that we are not questioning Mr Gonsalves's integrity as a lawyer and we hope that we can put this controversy to rest so that the work to try and save Afzal's life can move ahead.

We would like to place the facts along with supporting documents for the record so as to put an end to this unnecessary controversy.

On February 15, 2003 Colin Gonsalves filed an Application under section 386 and 482 of the Criminal Procedure Code for Addition of Additional Grounds. In this Additional Affidavit Para (c) states:

"Appellant states that Section 354(5) Cr. PC is unconstitutional and ultra vires Article 21 of the Constitution of India, in as much as death by hanging is the only manner of execution prescribed in law and such an execution constitutes cruel, inhuman and barbaric treatment and also constitutes exceptionally harsh and cruel punishment. This section was upheld in Bachan Singh's case on the reasoning that death by hanging in its severity is comparable to any other known method of execution; but this is many years ago. In the last decade there have been tremendous strides in techniques of execution and, the lethal injection for example, is proven to be a less painful method of causing death. For the legislature to prescribe death by hanging as the only method of execution is arbitrary, harsh and discriminatory and violative of Article 21. The Bachan Singh's case therefore on this point is outdated and obsolete and the issue deserves to be looked at afresh."


Mohammad Afzal told us he was asked to sign the Affidavit on February 4, 2003 without being shown the contents. He discovered that his lawyer had made this submission from a report in the Indian Express. Afzal was upset and he tried to contact his lawyer for an explanation but his lawyer did not meet him. At the time of Appeal to the Supreme Court he refused to give Mr. Gonsalves his Vakalatnama and instead wrote to the Chairman, All India Defence Committee for SAR Geelani, requesting them to find him another lawyer.

"Being in high-security ward of Tihar Jail where it is too difficult to communicate with outer people like lawyer etc., in a week, I have seen a news Through Indian Express daily that my lawyer had Told the High Court on behalf of me that I (AFZAL) had accepted the death sentence and I want only that method/way of killing/hanging should be changed by injecting the Powerful Toxic injection So as to reduce the pain of dying. I object and challenge this false statement which has been actually given by lawyer himself without my knowledge and consent making my whole process of appeal a mockery."


In September 2004, Afzal's wife Tabassum in an Appeal which was published in Kashmir Times and outlookindia.com and later in Asian Age on November 4, 2004 wrote:


"In the High Court one human rights lawyer offered to represent Afzal and my husband accepted. But instead of defending Afzal the lawyer began by asking the court not to hang Afzal but to kill him by a lethal injection. My husband never expressed any desire to die. He has maintained that he has been entrapped by the STF. My husband was shocked but he had no way of changing his lawyer while being locked up in the high security jail."


To the best of our knowledge Mr. Colin Gonsalves did not issue any clarification, or seek to meet his client so that the matter could be clarified. It can be imagined how distressed Afzal was when he learnt his lawyer had asked that he be killed by a lethal injection.

After Supreme Court rejected Afzal's appeal he wrote to Society for the Protection of Detainees' and Prisoners' Rights (SPDPR). His letter shows anguish and helplessness. In that letter he wrote:

"I was repreented by one Human rights activist Colin Gonzalves. (Advocate) in High Court. I was shocked when I came to know that from news paper Indian Express. That my Advocate has requested the court that AFZAL wants that he should be killed by Lethal Injection rather by hanging. When I contacted From High Security ward of Tihar Jail to my Lawyer He neither came to meet me nor informed me regarding this False request which I never did."

Mr. Colin Gonsalves has claimed that "I have never argued that Afzal accepts his guilt and that he prays for death by lethal injection" yet Mr. Jethmalani says that he remembers Mr. Gonsalves arguing that "there are more humane methods of carrying out the death sentence and a lethal injection is one of them."

Incidentally, the South Asia Human Rights Documentation Centre (SAHRDC) has brought out a monograph entitled " Legitimising Cruel, Inhuman and Degrading Treatment: The Ignominy of the Law Commission of India's Report on Modes of Execution " has documented how cruel is death by lethal injection.

Mr Ram Jethmalani has stated that if Mr Gonsalves's argument on the lethal injection had succeeded, there would not have been any "provision left for executing the death sentence." If we accept Mr Jethmalani's contention then we would have to ask why the argument finds no place in the 250 page written submission submitted by Mr Gonsalves at the end of his arguments in the High Court.

It is unfortunate that neither Mr. Colin Gonsalves nor Mr. Ram Jethmalani contacted SPDPR and sorted out the matter and instead given rise to controversy which can only have an adverse effect on the campaign.

We would like to also point out that it is most unfortunate that Ms. Nandita Haksar's name has been dragged into this controversy. Her reputation as a committed Human Rights lawyer cannot be questioned by anyone who has any knowledge of the Human Rights movement in India and much of her work is done with quiet dedication away from public eye. She spent more than three years running the campaign for Geelani's acquittal and SPDPR has requested her to help them run the campaign for Afzal.

Mohammad Afzal's letters have been published by SPDPR in their pamphlet entitled "Hanging Afzal Would be a Stigma on Indian Democracy: Afzal's Story in his Words ". [They are also available on this website - just follow the links in the text above or click on the link for Also See at the bottom of this page]

We believe that the controversy can be put at rest if Mr. Colin Gonsalves apologizes to Afzal and Tabassum and asks for their forgiveness for causing them so much pain and anguish.


Vinod K. Jose is Secretary, Communications, SPDPR (Society for the Protection of Detainees' and Prisoners' Rights)