Last weekend's Davis Cup tie between India and Japan again demonstrated why this team tourney is such a great institution. 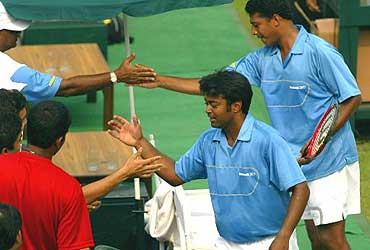 Butt’s Up. What’s that? A cursory greeting from one all at sea with the English language? C’mon, get serious, this is supposed to be a piece on Indian tennis and the Davis Cup. In that case, how about John "you cannot be serious" McEnroe, at his scathing best, on what he thinks of the species called tennis officials? Could have been, probably might even have, but that’s not what this crude reference is to. It’s more flippant and less harmless, though two young men who go by the names of Rohan Bopanna and Harsh Mankad might choose to differ on the latter claim.

Butt’s Up is the Indian Davis Cup team’s version of death row. It’s how they condemn losers after practice matches among themselves. The loser stands on the baseline with his back to the court, hunched so that he presents a broad backside, and his inverted racquet between his legs in such a manner that just the handle peers out between the legs. From the other side, the winner takes a crack at hitting the loser’s backside, with a serve. Literally speaking, the winner gets a chance to whip the loser’s butt, once again. Given that these guys serve at speeds of 180 kilometres an hour and with an accuracy that would do marksmen proud, it’s enough to give those on the receiving end some heebie-jeebies.

Mankad and Bopanna should know, having been at the receiving end of several such lashings. Two days before the just concluded tie against Japan, which India won comfortably 4-1, the crack doubles pairing of Leander Paes and Mahesh Bhupathi won a practice set against Bopanna and Mankad, which entitled them to a shot apiece at their opponents. What followed was a riot.

Bopanna and Mankad line up, giggling, strategizing on how to dodge, within the rules of the game, the broadsides that would be fired their way. Paes steps up to serve. Thwack. He misses, barely. Even as Bopanna and Mankad take a deep breath and brace themselves for the second serve targeted at their butts, everyone around the court except those two are in splits. Those two keep up a continuous giggle; it’s hard to bend down and laugh out aloud at the same time.

Bhupathi, the very picture of a warrior monk, steps up and lets loose a ferocious serve. Thwack. He almost does a William Tell. The ball cannons into the little piece of racquet sticking between Bopanna’s legs, and ricochets away harmlessly. A moan escapes Bhupathi’s lips. More laughs from the handful of onlookers. Mankad and Bopanna are delirious. They are jumping up and down near the baseline, playfully mocking Paes and Bhupathi. "Saved by the racquet butt, saved by the racquet butt," Bopanna cries out.

Camaraderie, cheerful banter, boys will be boys stuff. And, yeah, some serious tennis too. Davis Cup is teamwork in tennis at its finest, provided a team is made up of individuals who see it like that. This present Indian team does.

Sure, there are strong hints of baggage from the past, of one relationship having gone sour. It’s no business of ours to know, leave alone speculate, why Paes and Bhupathi drifted apart. It’s not becoming of us to debate whether and how their parting of ways hurt Indian tennis. We shouldn’t even be asking them if they will ever play again together beyond the confines of the Indian flag.

What we, as tennis fans, sporting enthusiasts and Indians, should take note off is how these two tennis players adjust to such rifts. For, in their case, once sporting instincts take over, such differences are reduced to mere footnotes. Spend some time watching the Indian tennis team at practice or at the matches, and you’ll see just how and why sport is such a binding influence.

Paes and Bhupathi aren’t tied by an umbilical cord anymore. They don’t share the chemistry they did at one time. Probably, they don’t even rub off energy on the other the way they used to. The freshness and gay abandon has been replaced by awkwardness and undercurrents, but they are thorough professionals who put their team’s interest over theirs. So while they don’t exchange much more than pleasantries with each other, they make sure that they do enough to get the job done and that their teammates don’t feel the pinch. Either that, or they do a darned good job of masking their hurt.

Every once in a while, time rewinds. Every once in a while, they create poignant moments on court that serve gentle reminders of a relationship, personal and professional, that was as magical and full of promise as they come. They serve up expressions that hark back to those glory days, reminders that some good times, good feelings and good deeds are hard to erase. Like after a particularly well-played point at a crucial time in their doubles match, when the customary gentle palm touch gives way to a demanding, mutually-insistent high-five. Or like when Paes pulls off an audacious shot in his match against Takao Suzuki, Bhupathi, sitting courtside, rushes out of his chair, puts his hand together, sports an ear-to-ear grin, as if to say, "did you see that?"

Sport binds. Sport heals. Sport shapes individuals. And the Davis Cup, the democratic and demanding sporting institution that it is, is truly special.

In a predominantly individual sport, the Davis Cup is the sole platform for team interaction and expression. It’s a different challenge for modern tennis players, who spend the year traversing the globe, mostly on their own, living out of a suitcase, playing for personal glory. For a handful of weeks in a year, though, they are asked to play an inherently individual sport, for their country. It’s a task that throws up its own peculiar, often unfamiliar, set of challenges, more so while playing for a diverse country like ours.

In India, contrasts are virtually a given in most societal spaces. Sport is no different. The diversity stems as much from talent and skill, as it does from status, upbringing, education, opportunities, sometimes even religion, caste and ethnicity. Since tennis thrives exclusively in urban India, the contrast arises primarily by way of talent and achievements.

On one side of the net are Paes and Bhupathi, both veterans, accomplished actors on tennis’s big stage. On the other side, there’s Bopanna, Mankad and Sunil Kumar, barely recognised or acknowledged even in their own country. They are works-in-progress, trying to follow in the footsteps of their illustrious countrymen with the dream that they’ll eventually leave imprints of their own. They are all diverse individuals, united in purpose: to win Davis Cup ties for India. And they all need the other to be on the same side and on the same wavelength.

For close to a decade now, the Davis Cup has virtually been the Paes show, with the others often relegated to playing side parts or just making up the numbers. It’s a role he relishes. However, this lack of depth means that India perpetually exists on the fringes of the 16-team World Group. The Davis Cup format allows good scope for individual expression, but to win on a consistent basis, against the strongest of opposition, requires meaningful contributions from all players on a team.

Bhupathi’s presence virtually secures a doubles point. What India have been desperately seeking is a second singles player, one capable of winning live rubbers in the cauldron-like atmosphere of the Davis Cup. Against Japan, India fielded Bopanna, the highest-ranked singles player (344) in the country (Paes and Bhupathi are much lower because they have long given up playing singles on the tour to focus on their doubles), and he delivered one crucial point.

Bopanna is a tall, gangly 22-year-old who could be cast in the role of the school bully, the one who always sits on the last bench in class and is perpetually plotting some mischief. His serve is his only weapon, which is why he will always be a threat on grass. The rest of his armoury could do with plenty of sharpening, though.

He’s got feet of clay, which means his serve loses some of its edge, because he isn’t able to follow it and get in close to the net to volley as he ought to be. His ground strokes are hard but dodgy, and don’t inspire confidence. Against the Japanese, Bopanna went for broke to avoid baseline duels. When the rhythm was going for him, he would reel off a few games. But the instant his touch deserted him, he would lose the momentum and start spraying the ball.

Yet, there’s promise hidden in those erratic performances. The talent is unquestionably there, it’s a matter of harnessing it and ironing out the numerous rough edges. According to Paes, Bopanna’s game has come a long way since he last saw him in September 2002. That’s encouraging, because it highlights good progress. Mankad is a sharper, more spirited all-court player than Bopanna, but his strength and physique fail him, particularly on the faster courts.

India next host New Zealand in the semi-finals of the Asia-Oceania Group 1 tie in April, a tie that will, in all probability, be played on grass. The matter of the second singles player remains an open-ended question. The likes of Bopanna and Mankad are still at a stage where they can improve their games exponentially, which is good. It’s also good that, during these Davis Cup ties, they get to hit and hang around with players of the calibre of Paes and Bhupathi, who care deeply for Indian tennis. Never mind that they keep getting their butts kicked every now and then.