'We would continue our efforts towards building a third alternative, but we do not want a communal government to replace the UPA at the centre,' says the General Secretary of the CPI. 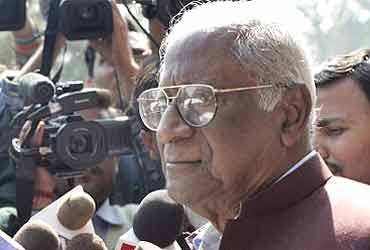 The transcript of BBC Hindi special programme Aapki Baat BBC Ke Saath with senior communist leader and General Secretary of the CPI on how long the relationship between Congress and Left would last.

Nagendar Sharma : Mr Bardhan, after nearly two years of extending support to the Congress-led UPA government, how do you rate your relations with the ruling alliance now?

A.B. Bardhan : Our relations have definitely turned tense and a number of issues have led to direct confrontation as well. I would say that during the past twenty-two months of UPA government, relations between the government and Left parties have taken a turn for the worse, but so far there has been nothing to take these relations to a breaking point. Having said this, let me make it clear, however, that no issue has assumed such proportions so far that would have led us to withdraw support.

Question from Muzzafarpur : Sir, almost every day Left parties have been expressing dissatisfaction with the functioning of UPA government. How long would this brittle relationship continue?

A.B. Bardhan : Yes, we are not happy with the economic and foreign policies of this government, but this does not mean that we should impose instability on the country.

If we were to make the government fall by withdrawing support and fresh elections are held, where is the alternative? Who would come to power after the elections? Therefore we think that such a situation has not come so far, and presently a viable alternative is not there. Had the Left been in a position to be an alternative to this government, we would have withdrawn the support by now. Such big decisions are not, and cannot be, taken in haste.

We do not want the communal forces to be an alternative to this government. Right now a secular and democratic alternative, commonly called by the name of third front or any other similar name, does not exist.

Question from Chandigarh : Sir, you are saying that there is no alternative to this government right now. Why is the Left not taking the initiative of forming the third front when some parties like Samajwadi Party and Telugu Desam were openly appealing to the Left?

A.B. Bardhan : Well, their policy towards the formation of a third alternative was not clear. Even if they were clear, then also the third front cannot emerge overnight. Presently there are no alternate policies or programmes and nor has been there any discussion on the same among the parties eager for this front. A third alternative cannot emerge without joint struggles on economic and foreign policies. Even before the struggle, a consensus on these policies would be required, which is presently missing.

Nagendar Sharma : So does it mean that the Left parties have abandoned the idea of a third front despite being unhappy with the UPA government?

A.B. Bardhan : We would continue our efforts towards building a third alternative, but we do not want a communal government to replace the UPA at the centre. Already, attempts are being made to whip up the passion of Hindutva with the announcement of Rath Yatras in a sensitive state, which has recently witnessed terrorist attacks -- all these developments cannot be ignored.

Fundamentalists on both sides, Hindus as well as Muslims, help each other by polarising the respective communities, which would be extremely harmful for the country and at such a critical juncture the announcement of Rath Yatras by BJP leaders is a dangerous move which could disturb the communal harmony.

Question from Pakistan : Sir, we admire the strength of Indian democracy and its voice at the global stage. However, it has been disappointing to note the way Manmohan Singh government has gone ahead with the nuclear pact with America. Your party and front had protested against President Bush’s visit, but how far would you go on this issue?

A.B. Bardhan : This pact marks the departure from India's independent foreign policy as also from the Non Aligned Movement (NAM). However, due to our pressure, the main reactors of the country have been kept out of American interference. Participation of large number of people in anti-Bush protests during his visit to the country shows that Indian citizens are aware of their self-respect and the days of turning other countries into American colonies are now over. This is an issue of national interest and our opposition to the pro-US tilt of this government would continue.

Let me also make it clear that there is no contradiction between our support to the government and opposition to its pro-America policies because we are supporting this government in the absence of any alternative. The day we have such an alternative we would think afresh, but presently this government is the best suited for the country and our pressure on them would remain.

Question from Udaipur : Are you against every decision been taken by the UPA government?

A.B. Bardhan : No, this is a wrong notion, I would say it is a myth being propagated by those opposed to this alliance and also by those who are not well informed. Left is not critical of every decision taken by this government and has supported as well as welcomed the pro-people’s decisions like the National Rural Employment Guarantee Bill and the Right to Information Act. Rural Employment Bill is a big step and Congress President Sonia Gandhi herself took a keen interest in the passage of this bill. It is a definite step forward towards tackling rural poverty; however, this alone is not sufficient. Left wants the government to act fast on protection of rights of tribals on forest land, safeguarding the rights of workers in unorganised sector and a bill for the welfare of agricultural workers should be passed without delay.

Question from Bihar : Sir, Left parties oppose foreign direct investment (FDI) into the country, whereas central governments during the past fifteen years, including the present one being supported by you, all governments have been stressing that due to lack of resources, FDI is a viable option. How would things move ahead?

A.B. Bardhan : Be clear on this issue. Left parties are not blindly opposed to the FDI. Our stand is that foreign investment in those sectors which increase employment and are not sensitive sectors, in such areas we have no problem with foreign investment. However, all of us should bear in mind that FDI cannot be the solution of all problems faced by the country. For India to develop, nearly 80 to 85 percent resources would have to be ours. Whatever amount of money may come in the form of foreign investment, it would not cross fifteen percent. Such investment would be supplementary, it cannot be the main thrust of developmental money. All of us should understand this. Now, these days, much is being talked about FDI in retail. This would have an adverse effect on at least four crore people of the country. This may help a handful of big retail traders in the country, but not for the small traders and common people.