'They Said They'll Kill Me'

The key witness in the Best Bakery case who turned hostile in court, has now come out into the open saying she was threatened by BJP MLA Madhu Srivastava and his cousin, Congress councillor, Chandrakant Srivastava alias Bhattu. Full text of the inter 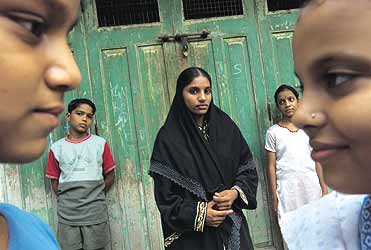 A few days after 19-year old Zaheera Shaikh spoke out about how her family turned hostile under duress, she looks calm and confident. The key witness to the Best Bakery massacre - one of the most brutal killings in Vadodara in the post-Godhra mayhem - is now sheltering in Mumbai with her family under the protection of the NGO, Citizens for Justice and Peace.

Just a fortnight ago, all 21 accused in the case were acquitted by the sessions court. A week after the verdict her mother Sehrunissa confessed the family had back-tracked under pressure. In a dramatic press conference two days later, Zaheera alleged that the family had received death threats from BJP MLA Madhukar Shrivastav and his cousin the Congress councillor Chandrakant Shrivastav alias Bhattu.

Zaheera's statement coincided with the NHRC's visit to Vadodara to examine evidence in the case. The carnage took place on March 1, 2002 when 14 people were murdered by a Hindu mob over a period of 12 hours at the Best Bakery owned by Zaheera's family. Her sister and maternal uncle were among those murdered.

Over the last year, Zaheera had boldly named the killers and the FIR was based on her complaint. She had even declared that she wouldn't marry till the killers were nabbed. But in May, she suddenly turned hostile with the rest of her family - a major factor that led to the collapse of the case.

In a tape-recorded interview, the diminutive woman spoke to Priyanka Kakodkar about the events that led to her about-face in court.

When did the threats begin? Did the Srivastav cousins meet you personally?

The threat started after my family received summons from the court in the beginning of May. Before that, we had not been threatened. Everyone thought the case would be tried in Ahmedabad or Delhi. But after we got the summons from the Vadodara court, Bhattu and Madhu Srivastav contacted Lal Mohammad, a scrap dealer in our basti and started threatening us through him.

Lal Mohammad would tell my elder brother Nafitullah what they said - that we would be killed if we told the court what had happened that night. It was through Nafitullah that the threats reached me. I did not meet either Bhattu or Madhu Srivastav till the day of my court hearing on May 17. On that day, Bhattu came up to me inside the court and threatened me directly. I recognised him because he's from our area.

He said, "zaban palat de nahii to achha nahi hoga (change your testimony otherwise you will pay). Your entire family will be killed. If you take our side, your family will be saved." Madhu Srivastav was also in court but I didn't know who he was. He just looked like a dangerous villain who kept staring at me. I got to know his identity later when I went to meet the public prosecutor after the hearing.

A reporter came to ask me why I had changed my testimony but this man shooed him away. When the reporter resisted, he said, "Don't you know that I'm Madhu Srivastav?" That's how I figured out it was him.

Did they meet your brother Nafitullah directly?

They had already informed Nafitullah that they would get all the accused off the hook. That the lawyers and police were on their side. After the summons, Lal Mohammad took my brother to meet both of them. He returned really shaken. He told me they had really pressured him and we should think about the safety of the family.

A week before my court hearing, my brother was made to appear in court without even a summons. He retracted his statement even though he had been attacked with swords by the mob. He came and told me there was no hope because everyone was on their side but I was still firm. It was when I went to court on May 17, that I got really scared.

What happened in court?

Firstly, there was no one to support us. I went to court with my mother and younger brother. As soon as we entered, Bhattu threatened me. And all around us, there was a huge crowd of hostile people. There were no Muslims in the crowd. They were mainly people from the Bajrang Dal and the families of the accused - the people who had murdered my family. They were all staring at me angrily and they were all from the same side. I felt they could do anything to my family.

At that moment, I thought - what should I do? Should I tell the truth or save my family? The public prosecutor who was supposed to represent me, also didn't seem to be on my side. The first time I met him was in court. After I took the witness stand, he told me "I am Raghuvir Pandya, the government lawyer and I'm going to be defending you." I was shocked. Shouldn't he have met us before the trial?

I had tried several times to meet the government lawyers without success. He asked me how many people had attacked the bakery. I said there were 15,000 though there were really just around 500. That's because Bhattu had demanded I say that. Then the lawyer asked me to identify the accused and I did not.

Didn't your community and the human rights groups in Vadodara support you?

No, I had no support from anyone. If I hadn't felt so alone, I would still have been able to resist the pressure. I could not even organise a lawyer for our family because everyone we went to asked for money. They said they needed at least Rs 4 lakhs to fight the case.

Why did it take you two months to clarify your stand?

After the court hearing, I went to UP to stay with our relatives. I wasn't in Vadodara when the acquittal verdict came out. People started accusing me of having taken money to change my testimony, but that's completely untrue. I couldn't tolerate these allegations. I wanted to let people know that it happened only because we were under threat.

There were rumours of a bargain with the BJP because you were seen with Madhu Srivastav in court and you left in his car. Is that true?

There was absolutely no bargain. I only saw him inside the court. As I said before, he did not accompany me to court and I had never met him before that day. After the hearing, my brother Nafitullah made me sit in a car and did not tell me whose car it was. I did not know it was Madhu Srivastav's car.

I remember speaking to them last year when they visited Vadodara after the riots began. When I returned from UP and wanted to speak out, I decided to get in touch with them again. I had lost their card, so I did not contact them earlier. But once I returned, I was determined to find their number because I had no help in Gujarat.

In the year since the incident, were you heckled by the accused or other Hindus?

No, the problems really began after we received the summons in May. It was in response to these threats and the atmosphere in court that day that I turned hostile. My family had moved to a relief camp and then to a Muslim basti after the incident, so we didn't really face any heckling.

You had earlier accused the police of doctoring the chargesheet in the case. Did they deliberately exclude some of the accused?

Firstly, they took a long time to arrest the accused. I had given them the names of the Thakkar brothers when I was in hospital and they did not arrest them for an entire month. Even then, they arrested one brother and did not chargesheet Bharat Thakkar who was the main person behind the attack.

Do you think the Gujarat riot victims will get justice?

There is no justice in Gujarat. The government there will bury the cases. But I'm hopeful that this case will be re-opened. And if it's tried from outside Gujarat, there is a better chance of justice.

Lal Mohammad told the NHRC team that you are lying. How do you respond to what he said?

I feel he has been cooperating with the Srivastav cousins all along because he is also being threatened. In this atmosphere of dread, it's difficult to fight.

The last year must have been very difficult for you. How did you cope?

It's been very hard. That whole scene and those sounds are always going to stay with me. I keep thinking of my sister who was killed so brutally. I remember how much we all pleaded with them to stop. And our own neighbours did this. That too, after assuring us soon after the Godhra incident that we had nothing to fear. In the morning they said they would protect us and at night they came and burnt us. I feel very angry that they got away. I have felt angry for most of the year.

Do you think Hindus and Muslims can live together?

(An abridged version of this interview appears in the print magazine dated July 21, 2003)

'It Was A Conspiracy Of The Sangh Parivar'