The Knives Are Out?

Has the Volcker probe succeeded in insulating Mrs Gandhi and nailing Mr Natwar Singh? Regardless, the Natwar-Sonia public spat isn't an exchange between Chhota Rajan and Chhota Shakeel but between top national leaders... 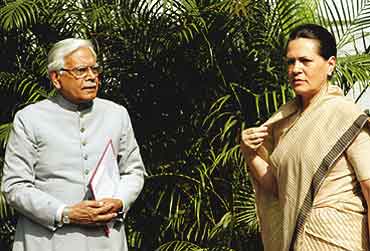 On December 14 2005 I wrote: "Mr Natwar Singh’s reputation is already damaged. Should he not, to clear the air, put pen to paper and write the whole truth about what exactly happened? And add a critique of how political funding in the present system is managed? Mr Natwar Singh can convert challenge into opportunity. He could serve society and change politics." Mr Natwar Singh did no such thing.

Meanwhile the political atmosphere became murkier. A proliferation of sting operations by media and by official agencies continued to worsen things. Corruption and personal vendettas seemed to be the sole motivation for political discourse. On January 18 2006 I wrote: "The overall scene, therefore, is reminiscent of the mafia gang wars during the last century. The future of the present political class may not differ very much from what befell the mafia gangsters of America." The mafia gangsters of course periodically destroyed each other through gang wars.

Some days back Mrs Gandhi gave a TV interview in which she accused Mr Natwar Singh of having betrayed her and the Congress party. Mrs Gandhi did not mince words. The masks were off. The fight was out in the open. What impelled Mrs Gandhi to choose this moment to attack Mr Natwar Singh? Has the Volcker probe succeeded in insulating Mrs Gandhi and nailing Mr Natwar Singh? One can only speculate. But a response from Mr Natwar Singh was a foregone conclusion. He did not disappoint. He gave his own interview to the media in which he made some interesting, and decidedly odd, observations.

Mr Natwar Singh told the media: "Anything can happen against me and my family. I can be harmed. My house can be raided. My grandsons could be harmed. Anything could be planted, and I could be sent to jail. Any intelligence agency may put something in my house, a file or a document, anything. I had been in the government, I know their tactics." He went on to add: "This is a conspiracy, there is no doubt about it. Whatever has happened, happened before our leader and with her permission. Why don’t they sack me from the party if I am guilty? You see, I know a lot of things about the party and the leadership!"

Well, well! Shades of Godfather? This isn’t an exchange between Chhota Rajan and Chhota Shakeel but between top national leaders. The government could "harm" him and his grandsons? It could plant false evidence in his house? He claims he knows the government’s tactics because he "had been in the government". One can only wonder how he coped with all this while serving in the government. Clearly, Mr Natwar Singh is rattled. In this state people often blurt out the truth, and their worst fears. He should be encouraged to speak the truth. Mrs Gandhi should also be encouraged to speak the truth. All politicians in all parties should speak the truth. They will feel much better. Truth purifies. Mr Natwar Singh also made a veiled threat. He claims to know a lot about the party and the leadership. He could make exposures. That would be truly wonderful!

It would be too much perhaps to expect Mr Natwar Singh to reveal all about the Volcker deal. He has already said everything was done with Mrs Gandhi’s permission. But what was everything? Revealing that could damage Mr Natwar Singh too. It is doubtful if he will speak on the Volcker findings. More likely he could spill the beans about various other matters he gathered through his long and unstinted record of being the dynasty’s loyal servant. It would help clean politics here if he recalled them. To jog his memory one might put a few questions to him about whether there was any truth in various reports doing rounds in the grapevine.

Would Mr Natwar Singh tell us if it is true that Mrs Gandhi requested him to intercede in a case involving the arrest in America of Mr Rahul Gandhi along with a lady friend for possessing over 100,000 US dollars of unaccounted money? Did Mr Rahul Gandhi spend a few nights in jail? Did Mr Natwar Singh approach Mr Brajesh Mishra, then National Security Advisor to the NDA government, for help? Did Mr Mishra contact American authorities who sought a personal request from the Prime Minister? And did Prime Minister Vajpayee oblige, securing thereby Mr Rahul Gandhi’s release? One recalls newspapers reporting a case in the Lucknow court connected to this incident. But nothing was heard of it subsequently. Like much else, it either died a quiet death or languishes in the freezer.

Earlier, I had suggested that Mr Natwar Singh could shed light on Mrs Gandhi’s visit to Moscow on June 14, 2005, when he accompanied her. What Mr Natwar Singh can tell us now is whether it is true that in Moscow they were joined by Mr Ottavio Quattrocchi? And whether it is true that from Moscow Mrs Gandhi and Mr Quattrocchi visited Geneva in Switzerland?

Earlier I had also asked questions of Mrs Sonia Gandhi. Such as whether there was truth in the detailed allegations made against her by Ms Yevgenia Albats, in her book, about the KGB paying her two billion US dollars. Ms Albats, it might be recalled, is one of Russia’s outstanding journalists. She was a member of the Soviet Union’s KGB Commission set up by former President Yeltsin. She had access to all KGB papers. Despite the reputation of the author, and the gravity of the charges, until now there has been only deafening silence from Mrs Gandhi and the Congress party. This is inexplicable. If the nation’s most powerful politician is perceived to be bankrolled by foreign powers, what credibility can this system have?

If the Albats allegation published in a reputed research book is false Mrs Sonia Gandhi should promptly deny it. Otherwise her silence could be perceived as assent.

Rajinder Puri can be contacted at rajinderpuri2000@yahoo.com