As 2019 comes to a close, we look at some of the Indian sports' low points. India's semifinal defeat in the ICC Cricket World Cup to Mary Kom's rare outburst, here's a look at 10 most talked-about headlines 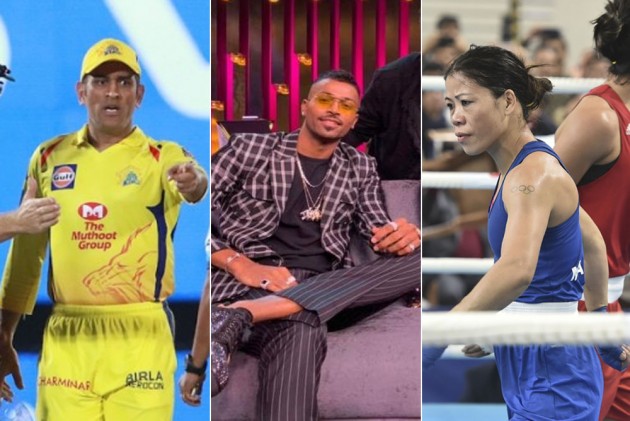 India were the favourites to win the 2019 ICC Cricket World Cup in England. But Virat Kohli & Co ended up losing the semi-final to New Zealand with mercurial Mahendra Singh Dhoni getting out on a no-ball. The legend was India's last hope, and it vaporized the moment a rocket throw from Martin Guptill hit the stumps. India lost by 18 runs while chasing a 240-run target in that Two-Day International in July.

Continuing with Dhoni, a different storm had hit cricket with the legend storming the field of play during an Indian Premier League (IPL) match at Jaipur in April. A no-ball confusion ensued as the two umpires failed to come to an agreement over the height of a ball delivered to Mitchell Santner. Dhoni, who just took off his pads after getting out, stormed on to the field and was seen furiously arguing with Indian umpire Ulhas Gandhe. No many were happy with Captain Cool's behaviour. And that night, Dhoni lost some of his aura.

Let's football, corporate style, with two distinct halves -- the haves and have-nots fighting for the future rights. And in this fight for one-upmanship, I-League lost out to Indian Super League (ISL) as the country's premier league. I-League became the sacrificial lamb as Indian football accepted the road-map. But fans can see the rot there, the crass commercialisation et al.

Prodigious Test opener Prithvi Shaw, along with two other Indian domestic cricket players, were suspended for doping violations in July. Shaw, 19, was charged with the commission of an Anti-Doping Rule Violation (ADRV) under the BCCI Anti-Doping Rules (ADR) Article 2.1 on July 16, 2019, resulting in a back-dated suspension, for eight months, which ended on November 15.

For the second time in more than eight decades, Indian cricketers were sent back home for disciplinary reasons. And they were Hardik Pandya and KL Rahul. In a TV show, Hardik Pandya had boasted about hooking up with multiple women and being open about it with his parents. Rahul was, however, a shade more restrained in his responses on relationships and women. But both paid the price.

After India's exit from the ICC Cricket World Cup, allegations arose that there is a rift in the dressing room between captain Virat Kohli and his deputy Rohit Sharma. It also claimed that only those who are part of ‘Virat Company’ or those indispensable to the team -- like Rohit himself and Jasprit Bumrah -- get a chance of playing.

In the last week of the year, Mary Kom defeated Nikhat Zareen to book her place in the Indian team for the 2020 Olympic qualifiers. But the story didn't end then and there. Mary refused to shake hands with the challenger after the bout, and it gave birth to another round of controversy. The row began when Zareen asked for a trail bout against Mary.

No Shooting In 2022 Commonwealth Games

Shooting will not be added to the roster of the 2022 Birmingham Games despite Indian Olympic Association's boycott threat, a Commonwealth Games Federation (CGF) official said in November. Shooting has always been one of India's top medal contributors in the CWG. The discipline yielded 16 medals, including seven gold at the last edition of the event in Gold Coast. For the first time since 1974, the sport has been excluded from the Games roster.

Kazakhstan capital, Nur-Sultan played the hosts to Pakistan vs India Davis Cup tie, saving the International Tennis Federation (ITF) from massive embarrassment. The tie was originally scheduled to be held in Islamabad in September but was pushed to November 29-30 after India expressed concerns about the safety of their players due to diplomatic tensions between the two nations following the revocation of Article 370 in Jammu and Kashmir.

After being overlooked twice by the Indian national cricket team, Ambati Rayudu decided to call it quits and announced his retirement from all forms of cricket in July. Rayudu initially groomed as India's number four, but missed the bus with '3-D player' Vijay Shankar getting the nod. Rayudu even got his social media moment, posting a 3-D glass. By August, he was ready to denounce the retirement to the relief of everyone.

And there were more...