Nikhat Zareen, who is an Asian bronze-winner, lost to Mary Kom, who rebuffed the youngster's attempted hug owing to a bitter build-up to the bout. 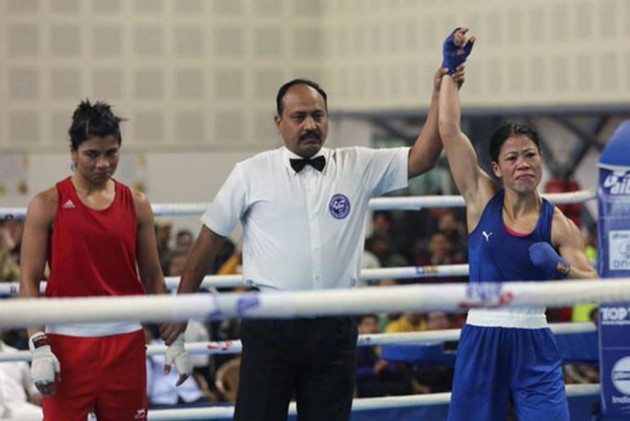 Former junior world champion Nikhat Zareen on Saturday said she was left quite hurt by M C Mary Kom's refusal to share a hug after their trial bout for the Olympic qualifiers which she lost here on a split 1-9 verdict.

The 23-year-old Hyderabadi, who is an Asian bronze-winner, lost to the six-time world champion, who rebuffed the youngster's attempted hug owing to a bitter build-up to the bout.

"I am happy with how I performed. I gave my all. I did not like her behaviour after the bout. I expected that as a senior boxer she would appreciate my effort. I felt hurt but I don't want to comment anything more," Zareen told reporters after the 51kg category bout here.

"She also used a bad word for me (after the bout) but it's ok," she added.

Mary Kom, while responding to questions on her conduct, said, "I am also a human being, I also get irritated. Can't I get angry when my credentials are questioned like this? And this wasn't the first time. It has happened so many times with me despite the fact that no other Indian boxer has achieved what I have achieved."

The questions she was referring to were raised when the Boxing Federation of India, in a departure from its laid down policy considered giving Mary Kom direct selection for Olympic Qualifiers.

Zareen's protest led to insinuations that Mary Kom was avoiding a clash with her, something that left the iconic boxer furious.

Zareen said she would come back stronger from this setback.

" I will get another chance and I will prove myself there. If she doesn't qualify from February Olympic Qualifiers, I would again appear for a trial for the world qualifiers in May," she said.

"I want to remain positive and I am sure I will be back stronger," she added