IPL 2019, RR Vs CSK: Furious MS Dhoni Storms On To The Field, Fights With Umpires After No-Ball Controversy – WATCH

In a last-ball thriller, CSK beat RR by four wickets in their reverse fixture of IPL 2019 with MS Dhoni winning the match of the match award 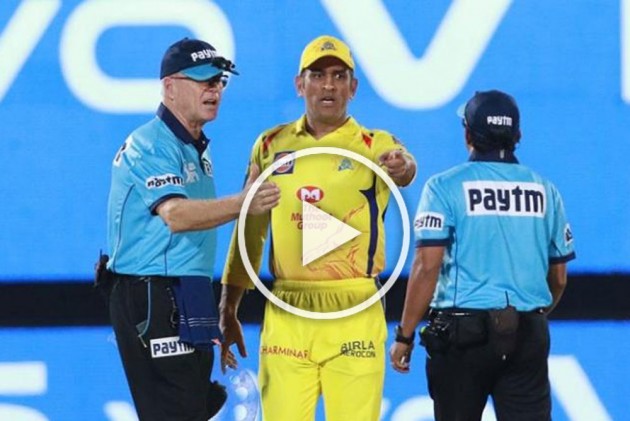 Mahendra Singh Dhoni is known as one of the coolest players in the history of cricket. But the Chennai Super Kings (CSK) skipper lost his cool during their Indian Premier League (IPL) match against Rajasthan Royals (RR) at Jaipur on Thursday.

Chasing a 152-run target, Dhoni got out on the third ball of the last over, courtesy a brilliant Ben Stokes yorker, leaving his team eight runs away from victory with three balls to play.

Then, the unthinkable happened. A no-ball confusion ensued as the two umpires seemingly failed to come to an agreement over the height of the fourth ball delivered to Mitchell Santner.

Dhoni Beats The Clock To Get DRS Call Right – WATCH

Dhoni, who just took off his pads, stormed on to the field and was seen furiously arguing with Indian umpire Ulhas Gandhe.

When MS Dhoni lost his cool https://t.co/9GjQ7hJWtt via @ipl

The other side of Dhoni. All through the pain in the span of three balls.#RRvCSK #HulkMode #ChennaiSuperKingshttps://t.co/s68lSpSrD7

So, No one had the guts to ask dhoni, why did he entered the ground after getting out. No discussions on that. And you same guys shouted on Ashwin for Mankading', ran full shows on that. Stop these double standards. No one is bigger than the game....

i did not expect that from dhoni. no matter what...that was not cool.

Needing four runs from the last ball, Stokes bowled a wide. And the reloaded ball was hit for a six by Santner.

CSK won the match by four wickets. Dhoni, who scored 58 off 43 balls, was awarded the man of the match.

CSK have won six matches in seven matches are at the top of the table.