Reports have emerged that Virat Kohli has had discussions with Rohit Sharma and the Indian team management for a possible change of guard. 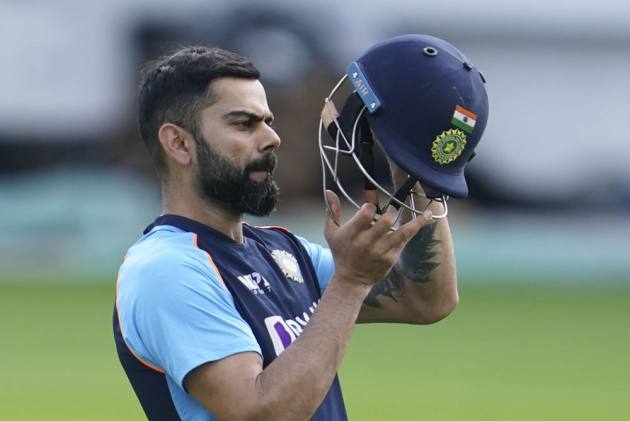 "This is all rubbish. Nothing (as) such is happening. This is all what you guys (media) are talking about. BCCI has not met or discussed anything on this issue (split captaincy)," Dhumal told a news agency.

Earlier in the day, reports emerged that Kohli has had discussions with Rohit Sharma and the team management for a possible change of guard. And they have taken the call to herald Rohit's captaincy in at least one format.

Times of India, quoting a BCCI source, claimed that Kohli "himself will make the announcement. He is of the view that he needs to concentrate on his batting and go back to becoming what he's always been — the best batsman in the world."

Dismissing the report, Dhumal said, "no such meeting took place."

Kohli, regarded as one of the greatest batsmen of all time, is having a lean phase with the bat. He hasn't hit an international century in almost three years. His last ton was against Bangladesh in a Test match in November, 2019.

"Virat is also the first to realise that his overall responsibilities as captain across formats are taking a toll on his batting. He needs that space and freshness because he has a lot more to offer. If Rohit takes over as whiteball captain, Virat can continue leading India’s red-ball aspirations and work on his T20 and One-day batting. He’s just 32 and given his fitness, he will easily play top cricket another five to six years at least," the report continued.

It's also claimed that Kohli's failure to deliver an ICC trophy has become a major roadblock in his captaincy. And also, BCCI officials were not happy with Kohli’s team selection for the World Test Championship final, which India lost to New Zealand.

"The BCCI is deeply concerned about Virat Kohli’s captaincy, especially in the ICC tournaments because of his failure as a captain in the ICC events. In a meeting held by the BCCI office-bearers in July after the WTC Final, it emerged that a lot of BCCI officials are unsatisfied with Virat’s captaincy," MensXP reported.

Despite leading India to historic Test series wins in Australia and England, Kohli has failed in ICC events, a fact that gets only accentuated when one looks at his captaincy record for the Royal Challengers Bangalore in the Indian Premier League (IPL).

As things stand now, RCB are third in the IPL 2021 points table with 10 points from seven matches (five wins and two defeats).

"Kohli will have to adjust really quickly because there’ll be hardly any time for him to get used to it. From the five-Test-match series to the T20 format, and AB as well, because these guys need to get runs if they have to have a chance to first qualify for the playoffs and then probably go on to win the title."

The UAE-leg of IPL 2021 will start on September 19. RCB take on Kolkata Knight Riders on September 20 at Abu Dhabi.