US Open 2019: Naomi Osaka's Reign As Champion And World Number One Ended By Belinda Bencic 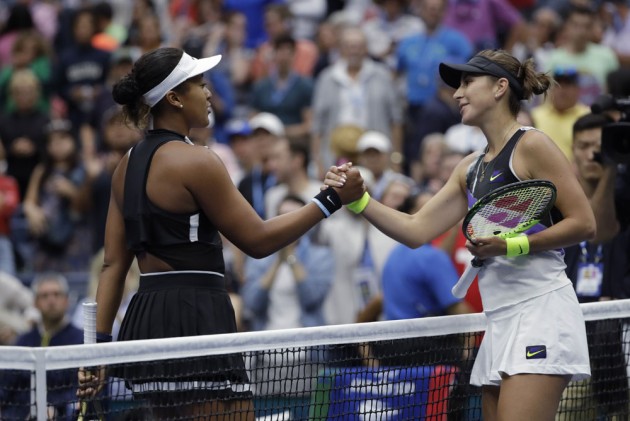 Belinda Bencic produced a stunning performance to end Naomi Osaka's title defence at the US Open in the fourth round and bring her stint at the top of the world rankings to a close.  (More Tennis News)

Osaka won plaudits for her class on and off the court in the third round, persuading an emotional Coco Gauff to do a joint interview in front of the Arthur Ashe Stadium crowd after her straight-sets win over the 15-year-old American.

As a result, she had plenty of backing under the roof of the same arena, but that did not inspire her to victory in the face of a magnificent showing from Bencic.

The Swiss had won her two previous meetings with Osaka, defeating her in Indian Wells and Madrid. Having had the benefit of Anett Kontaveit's withdrawal from her third-round tie, Bencic continued her hoodoo over the Japanese in fine style.

She completed a 7-5 6-4 triumph in one hour and 27 minutes, reaching only her second grand slam quarter-final with a win that ensures Ashleigh Barty will replace Osaka at the top of the WTA rankings.

Back in the QF! @BelindaBencic defeats World No. 1 Osaka 7-5, 6-4 to reach the QF stage in Flushing Meadows for the first time since 2014...#USOpen pic.twitter.com/U77E34blRi

Bencic quickly hit the ground running and opened up a 2-0 lead in the first set, only for Osaka to reel off three straight games.

Also Read: Fish Over Meat, And No Cheese - Nadal Offers Food For Thought

Any thought that normal service had been resumed proved misguided, however, and Bencic struck again as she nailed a passing shot to break before wrapping up the set when Osaka returned a serve out wide into the net.

The world number 12 did a tremendous job of extending the rallies and brought up triple break point in the fifth game of the second with another astonishing pass at the end of a remarkable rally.

Osaka subsequently sent down a double fault and then called for the trainer. She carried on but was unable to make the inroads needed to restore parity as Bencic secured arguably the biggest win of her career, celebrating arms aloft as her opponent directed a tame off-balance forehand into the net.

Bencic will next face Donna Vekic, who overcame Julia Goerges in three sets, in a match between two players looking to reach the semi-final of a slam for the first time.