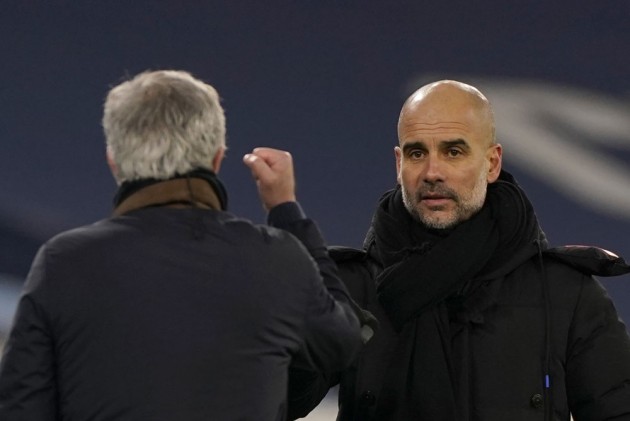 Pep Guardiola's team have not lost in any competition since a 2-0 defeat in the reverse meeting with Spurs in November, and the juggernaut never looked likely to stop on Saturday.

City scored with their first three attempts on target – Rodri converting a penalty that Gundogan won before the former Borussia Dortmund man stabbed in his 12th goal of 2020-21.

And three days on from their remarkable 5-4 FA Cup defeat to Everton, any lingering comeback hopes Spurs harboured were dashed when Gundogan fooled Davinson Sanchez to slot in his second, though a groin injury for City's talisman did present Guardiola with one cause for concern.

Against the run of play, City would have been behind had Harry Kane's superb free-kick not clattered Ederson's left-hand upright.

But having controlled 74.2 per cent possession in the opening 15 minutes, City were gifted the opportunity to lead when Pierre-Emile Hojbjerg clattered into Gundogan to concede a second penalty in as many games.

6 - No team has conceded more goals from the penalty spot in the Premier League than Tottenham this season (6), while only Leicester (10) have been awarded more spot kicks than Man City this term (7). Conventional. #MCITOT

With Gundogan making a mess of City's spot-kick at Anfield last week, Rodri took responsibility, though he was fortunate Hugo Lloris failed to keep out a rather unconvincing finish.

Lloris atoned before half-time, denying Gundogan a 10th league goal of the season after Raheem Sterling had got the better of Ben Davies to tee up the Germany international.

Yet the Premier League's top scorer in 2021 did get his eighth goal since the turn of the year five minutes after half-time, prodding home at Lloris' near post after more terrific play from Sterling, though Spurs' goalkeeper should have done better.

While one goalkeeper floundered, the other then turned provider – Ederson's searching pass controlled exquisitely by Gundogan and, with Sanchez slipping and flailing wildly, he finished coolly to round off another supreme City performance.

What does it mean? City storming towards the title

Last week's stunning win at Anfield was what truly signified a shift in power from Liverpool back to the blue half of Manchester, and there seems to be little stopping City now, with Guardiola's team having won 16 games on the bounce in all competitions, since drawing with West Brom on December 15.

Even without the benched Ruben Dias, who has been suffering with illness this week, the hosts were in complete control throughout, and the problems keep mounting for Jose Mourinho, whose side have lost four of their last five league games and sit in eighth, 17 points behind City.

10 - Ä°lkay GündoÄÂan has scored 10 goals in his last 12 Premier League appearances, after scoring 10 in his previous 82. Hot. #MCITOT

Gundogan in a league of his won

Gundogan has scored 11 Premier League goals this season – the only German players to score more in a single season in the competition are Jurgen Klinsmann (20) and Uwe Rosler (15), both in the 1994-95 campaign.

Indeed, in 2021, he has scored more goals than any other player in Europe's big five leagues, netting nine goals in nine Premier League games. However, he went off holding his groin shortly after making it 3-0, and Guardiola may now be without a player who has been crucial in Kevin De Bruyne's absence.

Lloris making a meal of it

Spurs captain Lloris was at fault for Everton's opener on Wednesday and could have done better for both of City's opening goals this time out, having got a hand to Rodri's penalty before allowing Gundogan's near-post finish to creep under him.

This is the first time a Mourinho-led side has conceded eight goals in a two-game period, and his goalkeeper – who did at least make a smart stop from Sterling late on – is far from blameless.

- City remain unbeaten in their last 23 matches in all competitions (W20 D3), conceding just six goals during this period – indeed, the Citizens have extended their all-time record winning run for a top-flight side in all competitions to 16 matches.
- Tottenham have won just one of their last 11 trips to City in the Premier League (D2 L8) and remain winless since a 2-1 victory at the Etihad back in February 2016 (D2 L3 since).
- Guardiola's team have not trailed for a single minute in any of their last 15 Premier League games, since a 2-0 loss to Tottenham in November – in the competition's history, only Arsenal have embarked on a longer run of successive games without going behind (a run of 19 matches between December 1998 – May 1999).
- Ederson's assist for Gundogan's second goal was the third assist he has registered for City in all competitions, also doing so against Huddersfield Town in August 2018 and Schalke in February 2019.
- City's Phil Foden picked up his 50th victory in what was just his 59th Premier League appearance, equalling the record for fewest games needed to reach this milestone in the competition's history, set by team-mate Aymeric Laporte in July of last year (also 59 games).

City make the trip to Goodison Park on Wednesday, with Everton their opponents in a match rescheduled from December. Spurs, meanwhile, face Wolfsberger in the Europa League a day later.