Afghanistan produced a scintillating performance in Southampton but ultimately lost a Cricket World Cup thriller by 11 runs to India after Mohammed Shami and Jasprit Bumrah struck in the death. 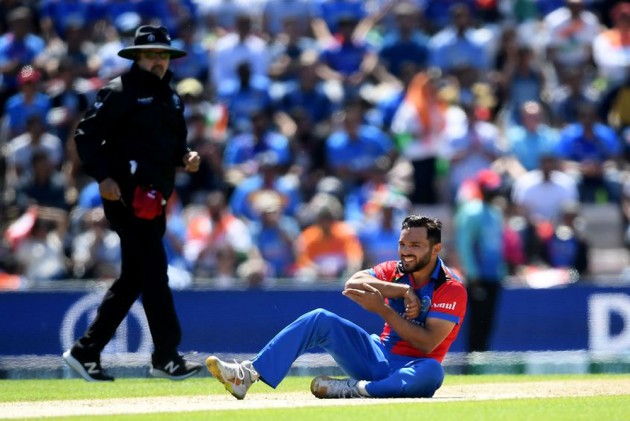 Gulbadin Naib admitted frustration as he wasn’t able to shake hands with his hero as a winner after Virat Kohli’s India survived a major scare against Afghanistan. Mohammed Shami's final-over hat-trick ultimately extinguished Afghanistan’s challenge in a thrilling clash at the Hampshire Bowl, after a brilliant display of spin bowling restricted India to just 224/8.

Gulabdin’s team came into this match searching for their first win at the ICC Men’s Cricket World Cup 2019 while Kohli’s troops, ranked second in the world, arrived as one of only two unbeaten sides in the competition.

The sides famously tied in the Asia Cup last year and this one went right to the wire too, India eventually emerging as 11-run winners in a game dominated by both team's bowling attacks.

Afghanistan had nursed themselves towards the modest target – Mohammad Nabi’s half-century putting them within reach – but two wickets in three balls from Jasprit Bumrah and Shami’s headline-hogging final over proved the difference.

But, after all the pre-tournament talk of 500-run innings, how great it was to see bowlers enjoy the spotlight in an instant classic for purists who like the ball to occasionally win the battle with the bat.

“India is always my favourite team and Kohli is my favourite player, so I’m sad to miss an opportunity to beat them,” said Afghanistan skipper Gulbadin.

“At one time I thought we might win easily but to be that close is a big achievement for my team. We bowled really well but we didn't take our responsibilities on the batting side. The total was not that much but in the middle you need 80s or 100s. 30 or 25s are not enough.

“Credit goes to Bumrah's spell, that’s why he is the best in the world and Shami bowled really well in the final over too.”

Afghanistan’s captain did have special praise for Nabi, who claimed the wickets of key Indian batsmen KL Rahul and Kohli and then produced a brilliant, steadying half-century from number six as the run chase got tight.

He was still at the crease when Shami started the final over, Afghanistan needing 16 for victory, but his wicket was the first of the tenth hat-trick in ICC Cricket World Cup history.

“He (Nabi) showed why he's one of the best players in Afghanistan and also in the world,” added Gulbadin. “He was playing exactly according to the plan and we got so close thanks to him."

Afghanistan will have just one day to rest before they are back in Southampton for their next match against Bangladesh, but following defeats to Australia, Sri Lanka, New Zealand, South Africa and England confidence is restored.

“We're taking a lot of positives from here, when you're playing this kind of team, you learn a lot of things,” said Gulbadin. “I think we're now getting better and better day by day.”