Olivier Giroud has had an excellent Premier League career but, ahead of the FA Cup final, remains curiously underestimated in England 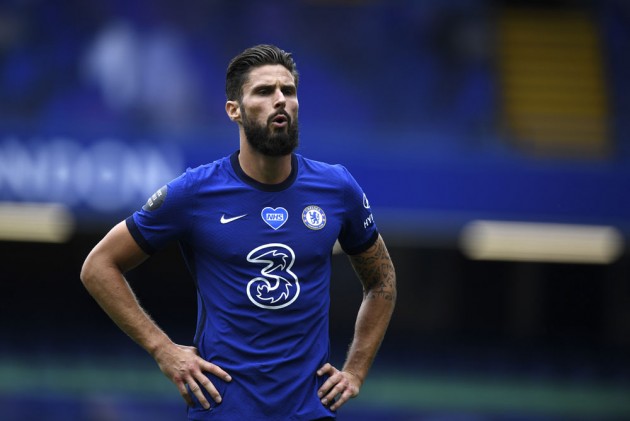 We could well be talking about Saturday's FA Cup showdown between Arsenal and Chelsea as the Olivier Giroud final. (More Football News)

The France striker will likely start for the Blues against his old club at Wembley after scoring in the semi-final win over Manchester United to take his tally in the competition to 16, a number only Sergio Aguero (19) can better since Giroud's debut.

Giroud has gone from a bit-part back-up looking for an exit to a crucial element of Frank Lampard's plans in 2020, particularly since the restart of football in England. As well as firing his side into the FA Cup final, he scored six Premier League goals - including vital ones against Aston Villa and Norwich City - to help his side secure a top-four finish.

"Now he is getting the absolute credit he deserves," Lampard said after the win over United, having hailed Giroud's professionalism while he was out of the first-team picture.

But why has the 2018 World Cup winner been seemingly underappreciated for so long?

Using Opta data, we delved back into Giroud's Premier League career for Arsenal and Chelsea to find out.

16 - Since his debut in the FA Cup in January 2013, Olivier Giroud has scored 16 goals in the competition - only Sergio Aguero (19) has netted more in this period. Specialist. pic.twitter.com/ru7kBveuXW

Giroud has scored 86 league goals in 238 appearances for Arsenal and Chelsea. Since his debut in the competition in August 2012, only Aguero, Harry Kane, Romelu Lukaku and Jamie Vardy have scored more.

Despite this, Giroud is no stranger to the substitutes' bench - he has only started 37 times in the league in the past four seasons. If you go back to May 2016 to extend that number to 38 - in other words, a season's worth of starts - Giroud has scored 32 goals. Taken in isolation, that would match the record tally for a 38-game season set by Mohamed Salah in 2017-18.

Giroud's minutes-per-goal rate in the Premier League is unsurprisingly solid: 154.3. It's not as good as Pierre-Emerick Aubameyang's (128.3), but it's better than that of Alexandre Lacazette (178.2) and only fractionally lower than Tammy Abraham's (151.6), all of whom have been regularly preferred to Giroud in starting line-ups.

Giroud has also performed well in the Expected Goals category. He has only had negative xG differentials (ie, scored fewer goals than should reasonably be expected given his chances) in three of his past eight league seasons. Twice, in 2014-15 and 2016-17, he has overperformed in terms of xG by a factor of more than five.

So, why has he not played more?

33 – At the age of 33, Olivier Giroud has become the oldest player to score in five consecutive Premier League starts, taking over from Jamie Vardy (32 years old). Zest. pic.twitter.com/2MZyWY4DTU

One problem might be Giroud's xG differential has fallen in recent years.

Since his Chelsea debut on February 5, 2018, he has scored 13 league goals from an expected 15.5, giving him a -2.5 difference. That number is below the top 10 goalscorers in the league in that time and pales in comparison to Aubameyang, who has a differential of 7.2, or Tottenham's Kane (10.4).

Those numbers make sense when you consider Giroud's 'big chance' conversion rate for Chelsea is at 29.2, almost exactly the same as Abraham (29) and below maligned former team-mate Alvaro Morata (32.5). Likewise, his shot conversion rate, including blocked shots, is 12.9 - lower than Abraham (16.7) and Morata (14).

5 - Players to score 100+ goals in all comps for @Arsenal under Arsene Wenger;

Giroud told L'Equipe this week that he wants to keep playing until he is 36 and that the signing of Timo Werner by Chelsea is simply "an extra motivation" to perform.

Nobody, Giroud included, expects Werner to spend too much time on the bench at Stamford Bridge - so what can the former offer Lampard?

He has form, of course - he became the oldest player to score in five consecutive Premier League games in July and has found the net in six of his past seven appearances in all competitions - but his usefulness goes beyond his goal tally. After all, this is a player who started all but one of France's games at their World Cup triumph two years ago, despite not scoring.

Giroud offers a different sort of threat in the Chelsea attack, rather as he did for Arsenal. Since his debut, he has scored 31 headers in the Premier League, five more than any other player (Aubameyang has three).

In that same period, he has won 1,063 duels, averaging 6.5 per game for Chelsea at a success rate of 51 per cent, which is greater than any other current Chelsea or Arsenal striker. Similarly, his average of 4.9 aerial duels won per 90 minutes for Chelsea is more than double Abraham's tally, while he averages 7.7 touches in the opposition box per game compared to Abraham's 6.4.

These are not new elements to Giroud's game, yet they have been undervalued. He is a target man whose unselfish work can make teams tick, yet his knack for goals - when given the opportunity - speaks for itself.

Were fans allowed inside Wembley on Saturday, Giroud would be worthy of adulation from all sides of the ground.