The 21-year-old Walelegn bettered the earlier course record of 59:06, which was held in the name of compatriot Guye Adola, set in 2014 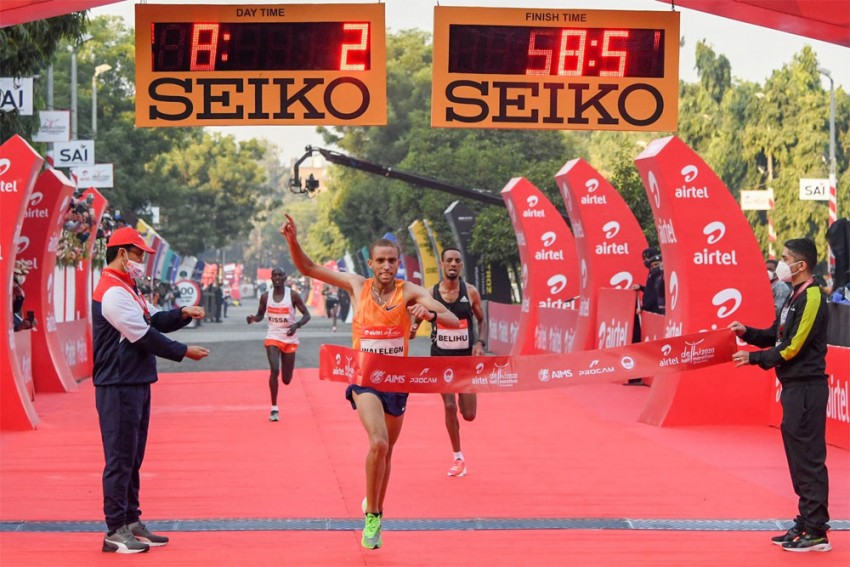 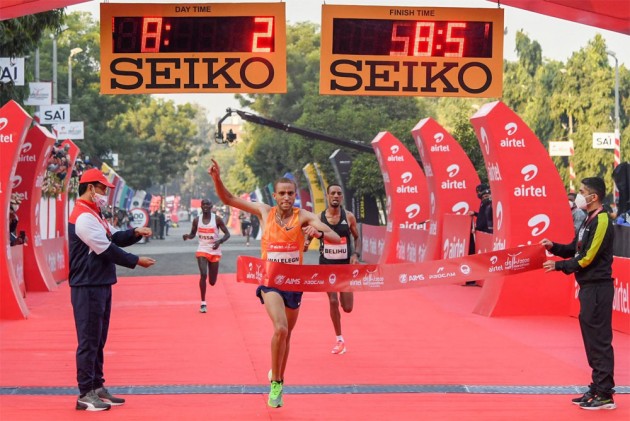 Ethiopians Amedework Walelegn and Yalemzerf Yehualaw smashed course records to win the men's and women's titles respectively in the Airtel Delhi Half Marathon held in a bio-secure environment amid the COVID-19 pandemic on Sunday. (More Sports News)

The results in this World Athletics Gold Label road race were unprecedented with both the men's and women's elite race winners re-writing course records. For India, Tokyo Olympics-bound Avinash Sable smashed the national record with a time of 1:00:30.

The 26-year-old Sable, from Maharashtra, was 10th overall.

According to the Athletics Federation of India's official records, the earlier national half marathon record stands at 1:03:46 in the name of Kalidas Hirave of Maharashtra.

This year's race course was radically different from the last two years due to health protocols and the elite athletes ran under unprecedented circumstances due to the pandemic with the organisers providing them with a bio-secure zone.

In the men's elite race, last year's silver medallist Walelegn beat compatriot and defending champion Andamlak Belihu in a nail-biting finish for the gold in a course record time of 58.53 seconds. Walelegn had won a bronze at the World Half Marathon Championships last month.

The 21-year-old Walelegn bettered the earlier course record of 59:06, which was in the name of compatriot Guye Adola, set in 2014.

India's Avinash Sable, who qualified for the Tokyo Olympics in 3000m steeplechase, emerged winner among Indian elite runners, clocking 1:00.30. This was the first time an Indian ran below 61 minutes in the ADHM.

Srinu Bugatha, who won the race last year, was second this time among the Indians with a time of 1:04:16 while Durga Bahadur Budha was third after clocking 1:04:19.

In the star-studded women's elite race, Yehualaw surged ahead after the halfway mark to win in course record time of 1:04:46, bettering the earlier mark of 1:06:00 in the name of compatriot and defending champion Tsehay Gemechu, who could not finish on podium this time.

Kenya's Ruth Chepngetich was second in 1:05:06 while another Ethiopian and world half marathon record-holder Ababel Yeshaneh was third in 1:05:21.

Like her male counterpart Walelegn, the in-form Yehualaw had finished second in last year's ADHM and third in the World Half Marathon last month.

Yeshaneh was the leader of the pack at the 5km mark but was behind eventual winner Yehualaw by the 10km distance.

Defending champion Gemechu fell off the leading pack by then. Kenya's world marathon record holder Brigid Kosgei pulled out before the halfway mark.

Among Indians, Parul Chaudhary, who had finished second last year, took the gold in 1:12:18 while Sanjivani Jadhav (1:13:00) and Komal Jagadale (1:14:04) were second and third respectively.

To comply with COVID-19 pandemic protocols, the runners covered around 4.5km, starting at the Jawaharlal Nehru Stadium, and then ran on two loops of approximately 6km, before returning to the finish line outside the stadium by the same route.

The ADHM is one of the first global sporting events to be hosted in India during the pandemic and had Sports Minister Kiren Rijiju and Olympic gold-winner shooter Abhinav Bindra in attendance.