The nomination of Shweta Bhatt, wife of suspended IPS officer Sanjiv Bhatt, from Maninagar in Ahmedabad against Gujarat chief minister Narendra Modi seems to have rattled him 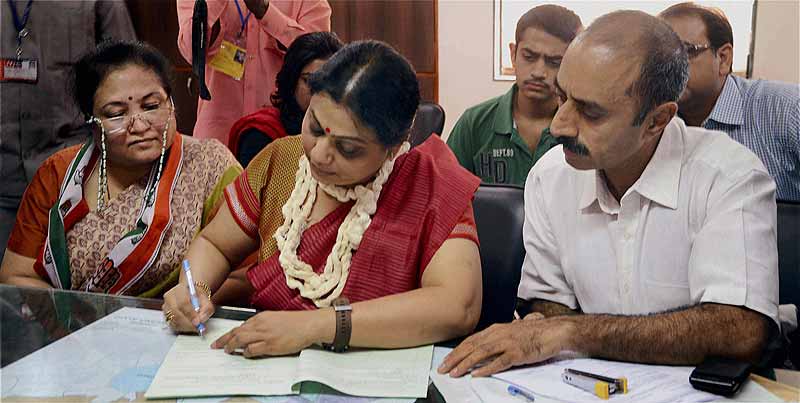 The nomination of Shweta Bhatt, wife of suspended IPS officer Sanjiv Bhatt, from Maninagar in Ahmedabad against Gujarat chief minister Narendra Modi seems to have rattled him enough to charge that the Congress is conspiring to foist Congress President Sonia Gandhi’s political advisor Ahmed Patel as the chief minister of Gujarat.

Modi made this remark before filing his nomination from Maninagar in Ahmedabad seeking a third term from a constituency which has twice sent him to the Vidhan Sabha. A little while earlier, Shweta Bhatt filed her nomination as the Congress candidate, setting the stage for a poll battle between the two.

While Modi is rated as invincible in a constituency nourished and nurtured as never before since the state came to be formed, the nomination of Shweta Bhatt is expected to make him uncomfortable with her pointed assaults on the torment and targeting of her husband and the issues she is likely to raise in her campaign speeches.

Admitting that it was not a fight amongst equals Shweta said, " I have no false promises to make. I speak the truth and I speak for those who value democracy and have been victimized in the present regime. I stand for them.”

She said that she had chosen to fight anyway but the Congress opted to give her their party mandate. "I am fighting because they had implicated my husband and me and my family battled for justice for years. Then I realised, it was not only my family but many other families who were struggling," Shweta said, making it clear that it was the reason why she chose to fight the elections.

Earlier Modi who spoke to his workers before filing his nomination seemed rattled by the choice for he charged the Congress with conspiring to impose Ahmed Patel, the political advisor to AICC president as the chief minister of Gujarat.

The Gujarat chief minister who had switched to a more secular agenda with his three day sadbhavana fast in September last year in a bid to soften his Hindu Hriday Samrat label seems to have suddenly opted to back pedal in this elections. For one, the Gujarat BJP has not given a single ticket to a minority candidate and today the chief minister sought to imply that a minority community politician was sought to be imposed as the chief minister of the state if the congress comes to power.

Gujarat Congress candidate for Visavadar, Ratibhai Mangroliya, had claimed that his mandate— the document that certifies the candidate officially represents the party— was allegedly "stolen" by a 12-year-old while he was on his way to file his nomination papers. Keshubhai Patel is contesting from t here.

BJP leaders termed Shweta Bhatt’s candidature as proof of the fact that the Congress had all along been backing her husband in his charges against the chief minister. ”It shows their bankruptcy,” the spokesperson said.

Sanjiv Bhatt had shot to fame after he had taken on Gujarat Chief minister by alleging that Modi had asked the police to “allow Hindus to vent their ire” in the aftermath of Sabarmati Express carnage in Godhra in February 26, 2002. Bhatt was later suspended by the state government and has recently been charge sheeted in a decades old custodial death case in Jamnagar district.

Modi on his part had won from Maninagar for the second term in 2007 by defeating Congress heavy weight Dinsha Patel with over 75000 votes.

The Shadow Of The Patriarch