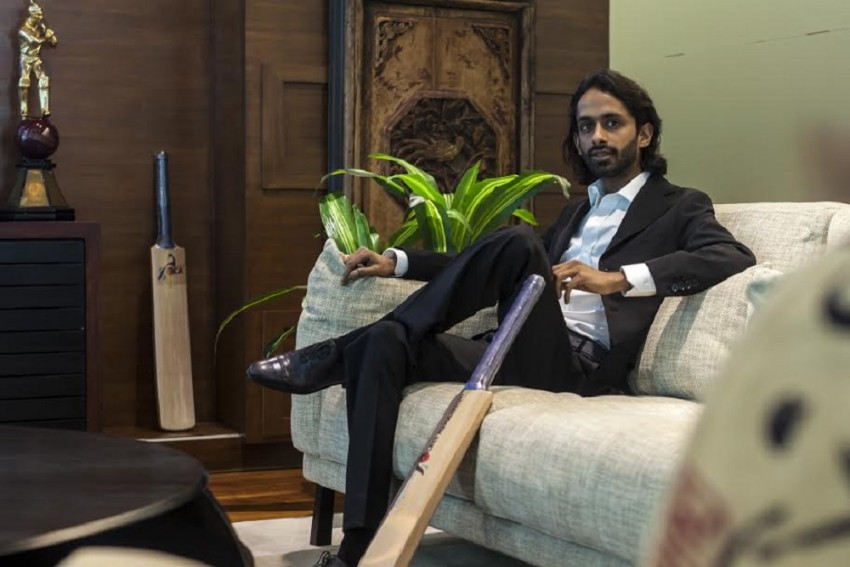 Apoorva Salkade
Qaiser Mohammad Ali May 08, 2017 00:00 IST ‘Rajasthan wants to implement Lodha Committee recommendations and break decisively from the past’ 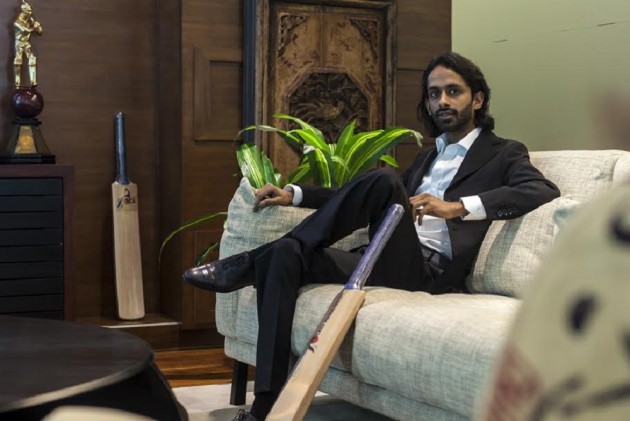 Ruchir Modi is not yet 23 and has no experience of cricket administration. Yet, he has decided to contest for the president’s post of the Rajasthan Cricket Association, currently headed by his father and IPL architect Lalit Modi. Ruchir’s argument is “there is no experience without experience”.

The 22-year-old scion of the KK Modi Group says he wants to carry his father’s legacy forward by heading the RCA. The RCA elections were to be held on April 26, but were called off on April 22 as the Lodha Committee recommendations could not be amalgamated with the RCA constitution, which is governed by the Rajasthan Sports Act. Some people claim that they were postponed as the Modi’s were confident of victory. Now, the Rajasthan High Court has directed the RCA to hold elections on May 29.

Ruchir passed Grade X from American School, Mumbai, in June 2010 and then joined his father in London, where he has settled down following alleged threats to his life in India. After completing high school from American School in London High School (2010-2012), he secured a bachelor’s degree in Global Business Management from Regent’s University, London (2012-2016). Ruchir was appointed Director with New Delhi-based Godfrey Phillips India Ltd in March 2016 and Executive Director with Peyotito in September 2016.

An age of 21 or 22 is usually not the time to enter the world of Indian cricket administration. Why are you entering the fray now and not waiting to absorb experience as Alwar district cricket chief and then throw your hat in the ring later? Wouldn’t that have been wise and pragmatic? Why this seeming hurry to enter cricket administration?

I don’t think age has got to do anything with it. As far as relevant experience is concerned, I have spent years with my father in the field and saw him execute each and every plan laid out by him. The whole idea of entering cricket administration was to take my father’s legacy forward.

You may be pitted against political veteran CP Joshi in the election. Are you ready to take on any challenge, whether it is from CP Joshi or anyone else?

Yes, I am ready to take on the challenges which will come in my way to victory. I have my own vision for which I would go beyond my capabilities to make sure I achieve them. The whole idea is to move away from politics and play in the right spirit of the game.
It is being said that assuming you are elected president, your father would be guiding you from behind. But even assuming for a moment that he guides you, you would be required to take instant decisions. Are you prepared for that, considering your lack of experience in cricket administration?

My father will have zero influence on my decisions. Yes, I will be seeking to take advice from my father but I am my own man and I would suggest you to wait and watch what you will get to see in the coming years and then take judgement based on that. There is no experience without experience so with time even that will come.
Do you feel being the son of Lalit Modi you have a distinct advantage as you contest for the RCA top post? He had a lot of supporters and well-wishers in Rajasthan and Indian cricket and you may get advantage of that.

Well that you will only get to see once the elections are over. I must say I was exposed to cricket at a very young age and since then I have interacted with the BCCI members at centre and state level. Many knew that I was planning to head RCA and I was overwhelmed by the amount of support I received.

When the BCCI suspended RCA for electing Lalit Modi in 2013 it told RCA that it should take action against Nagaur District Cricket Association as he headed that association. Your father still continues to be Nagaur chief. Isn’t it uncertain for you that the BCCI (or the Committee of Administrators) may still not re-admit RCA even if you are elected as RCA president while Lalit Modi continues as Nagaur president? Have you given a thought to this aspect and planned accordingly?

The very first agenda of my vision is to take BCCI and RCA relationship forward. Things are already getting better with time. The RCA constitution needs to be appropriately amended to bring the association in line with the Lodha Committee recommendations. This is mandatory and must be done urgently. The Lodha Committee’s recommendations mark a watershed in the history of Indian cricket. By embracing the committee’s recommendations, we signal our support to all that is good and progressive and break decisively from the past. We must adhere in letter and spirit to all the recommendations of the Lodha Committee. There is no option but to harmoniously align the Lodha Committee recommendations and the Rajasthan State Sports Act. Without such an alignment, the RCA will be ineligible for BCCI recognition and funding. Without the BCCI’s support the game of cricket cannot grow in the state.
Wouldn’t it have been ideal that Lalit Modi had quit the Nagaur presidentship and then you had contested for the RCA top post, so that all uncertainties and chances of RCA’s readmission in BCCI were nullified?

Lalit Modi’s suspension is as per BCCI bye-laws. And given the Lodha Committee recommendations, the suspension is no longer sustainable. No office bearer can be suspended for more than six months. As such, the question is irrelevant. It is merely a formality before the ban is lifted.

BCCI expelled Lalit Modi on September 25, 2013. According to the then BCCI constitution, no one can be expelled for more than three years in one stroke. On completion of three years, that person/official/state association could apply to BCCI for reinstatement and the BCCI would take a decision on that application.

On September 24, 2016, Lalit Modi’s three-year ban got over, technically, but he didn’t apply for reinstatement, despite the BCCI officials who were involved in his expulsion being out of the Board now. What was the reason for not applying for reinstatement, especially as you had become Alwar cricket president by that time (and probably it was decided to field you for RCA president’s post)?

I am my own man and he is his own. How can I speak on behalf of my father? It is for him to answer. You know the environment in the BCCI and the animosity some members of the BCCI had towards my father. There wasn’t even a fair hearing before they decided to ban him. I must also flag a related issue. The RCA has been pleading to lift the ban on the association before every possible forum, including the Supreme Court-appointed Committee of Administrators (CoA). Given the prejudice nurtured by the then BCCI dispensation [headed by Shashank Manohar and N. Srinivasan], the Board adopted only dilly-dallying tactics about lifting of ban on RCA. You cannot suspend an association forever; this contravenes the basic principles of natural justice and is bad in law. In fact, under Lodha Committee a suspension can’t go beyond six months.

Assuming you are elected and the BCCI (or CoA) doesn’t take RCA back in its fold, would you approach a court of law? Are you open to that option?

I don’t think it would be necessary as things are getting better but, yes, if things go in the opposite direction, I would definitely approach the court.
Your father has announced that RCA has accepted all the Lodha Committee recommendations. But the constitution finalised by the Lodha Committee hasn’t been implemented by RCA thus far (even today, the old RCA constitution is displayed on RCA website). Why this delay in adopting the new constitution?

The reason behind that is simple. The new constitution was sent to the Registrar for approval, and he had some queries regarding the new constitution. The RCA cannot implement a constitution that has not been approved. The RCA has accepted the Lodha recommendations in letter and spirit. Getting it incorporated into the constitution is a technicality but a very important one. There are some anomalies between the RCA and the state’s Sports Act. The old constitution flouts the recommendations of the Lodha Committee and the Supreme Court order, and that is not acceptable to the RCA. On the flip side, if it implements the Lodha Committee reforms in its constitution it will be a violation of the state's Sports Act. But it is an incongruity which we will resolve quickly.

At present, the RCA is virtually bankrupt and there is a huge problem of funds and distribution of salaries to its employees. If you are elected its president, how do you propose to generate funds to run the association, particularly if the BCCI doesn’t re-admit RCA in its fold?

First of all, it’s crucial for the members of RCA to work together and achieve the desired objectives. For me, there is a need to have a sound organisational culture within RCA first in order to take things forward with BCCI. With right committees and right people, funds shall be used in an appropriate manner.

Various Rajasthan state teams have not performed well in the 2016-17 season. Cricket politics and court cases have clearly affected the cricket in the state. What is your vision for restoring sanity and normalcy in Rajasthan cricket and its improvement?

Politics is at every level. Even a guy with Rs.4,000 salary is affected by politics. The system calls for immediate release of funds and transparency. If elected, I will make sure that every rupee spent by RCA in published online on the website. Further, I have a five-point vision statement which includes opening up new academies, new stadium, CSR Programme, bringing more people into the academies and hope to see three players at national level [team] from Rajasthan.

RCA doesn’t have its own stadium; it organises matches in the state government owned Sawai Man Singh Stadium, Jaipur, after signing MoUs with it. The state government some time ago allotted a piece of land to RCA on the outskirts of Jaipur to build a new stadium. Nothing has accrued thus far. Do you have a plan vis-à-vis building a stadium owned by RCA?

I do not have first-hand knowledge of this since I am not an office bearer of the RCA yet. I must, however, share with you that I am a firm believer in infrastructure development for any sport to thrive and I have my plans. In due course, you will see the planning and thought gone behind building something that will be a source of pride and inspiration for every Rajasthani.
Some people in RCA administration off and on come under the spotlight for financial mismanagement at lower levels, particularly vis-à-vis TA/DA etc. How do you propose to check this and put the house in order?

As I have said before, the expenses incurred by RCA will be out on the website. We want to put everything into public knowledge and want people to know where the funds are actually being used. If successful, change will come.