The former defence minister accused Sitharaman of trying to tarnish the image of public-sector Hindustan Aeronautics Limited (HAL) both nationally and globally. 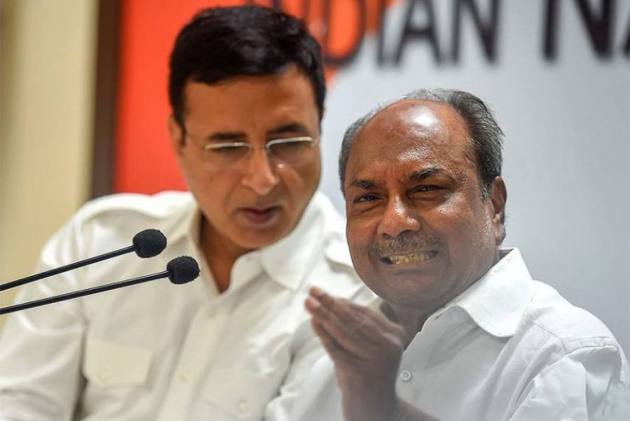 Former Defence Minister and senior Congress leader A K Antony on Tuesday accused Defence Minister Nirmala Sitharaman of "supressing facts" on the Rafale deal and questioned as to why the government was not setting up a Joint Parliamentary Committee (JPC) to investigate it.

Antony also accused the government of being "guilty" of "gravely compromising" national security in the Rafale fighter jet deal.

"Since, there is a growing perception that the Modi government's Rafale purchase deal has more skeletons in its closet, let there be joint parliamentary (JPC) probe to bring out the truth," Antony told reporters at a press conference here.

Why Rs 520 Crore Aircraft Was Bought For Rs 1,600 Crore: Rahul On Rafale Deal

Rejecting the charge levelled by Sitharaman that an unprecedented intervention by him in 2013 had put the "final nail in the coffin" when the cost negotiation committee was giving final touches to the deal, he said this is completely false.

"Her allegations are completely false and she is deliberately suppressing the facts," Antony said.

The contract negotiations were almost over and when the proposal was sent to the Finance Ministry, it felt that the life cycle cost concept was a new concept and they cannot support it, he alleged.

The then Congress-led UPA government had received objections and reservations in written from several leaders, including a senior BJP MP, about the life cycle cost calculation and the Indian Air Force (IAF) was insisting to finalise the deal, he claimed.

"Then I directed that the negotiations to continue, but take it to the Cabinet Committee on Security, only after disputes are settled," Antony said.

The former defence minister accused Sitharaman of trying to tarnish the image of public-sector Hindustan Aeronautics Limited (HAL) both nationally and globally.

He also asked if the price of the Rafale fighter jets were cheaper than that negotiated by the UPA and why the government bought 36 aircrafts instead of 126 from the French company.

"The Congress demands that the Modi government publish the price of the Congress-UPA's deal of 126 aircrafts and the price of its 36 Rafale deal, including per aircraft price of the same, to clear the doubts of the people and let the nation decide who is correct," he said.

He claimed that before the UPA demitted office, the negotiations were almost over, and after the NDA came, Prime Minister Narendra Modi announced an unilateral purchase of 36 aircrafts on April 10, 2015.

"When the IAF demanded 126 aircrafts, who authorised the prime minister to reduce the number to 36?" he asked.

The requirement for 126 aircrafts was made by the IAF in 2000. In 2018, the threat perception from our border nations has increased than what it was in 2000, Antony claimed.

The Congress leader claimed that if the UPA deal was not cancelled, the HAL would have acquired state-of-the-art technology through transfer-of-technology (ToT) and would have gained experience to manufacture fighter aircrafts. India lost this opportunity, he said.

"Instead of seriously trying to resolve those teething issues, Prime Minister Modi went to Paris and announced the unilateral purchase of 36 Rafale aircrafts under the inter-governmental agreement on April 10, 2015," he said.

The Congress leader said Sitharaman claimed that HAL does not have the capability to manufacture these aircrafts, but it is the only aerospace company in India having the capacity and has been awarded the Navaratna status.

He said HAL has manufactured 4,660 aircraft of 31 types, including the Sukhois and the MiG aircrafts.

During the UPA rule, HAL was a profit-making company, but under the Modi government, HAL, for the first time in its history, has taken approximately Rs 1,000 crore loan from various banks, Antony claimed.

"Prime Minister Modi's decision is a clear violation of the DPP," he said.

The Modi government's Rafale deal "squanders" national interest by forgoing the ToT and India lost the opportunity to get the most modern technology to manufacture fighter aircrafts, Antony claimed.

Thousands of job opportunities of Indian technicians were lost at HAL, the former defence minister alleged.