Ground X Made In India

An Indian Start-Up has developed a first of its kind -- an ultra-light-weight tactical combat platform -- based on the latest Ground–X–Technology and has its own hi-tech park at Hosur, Tamil Nadu. 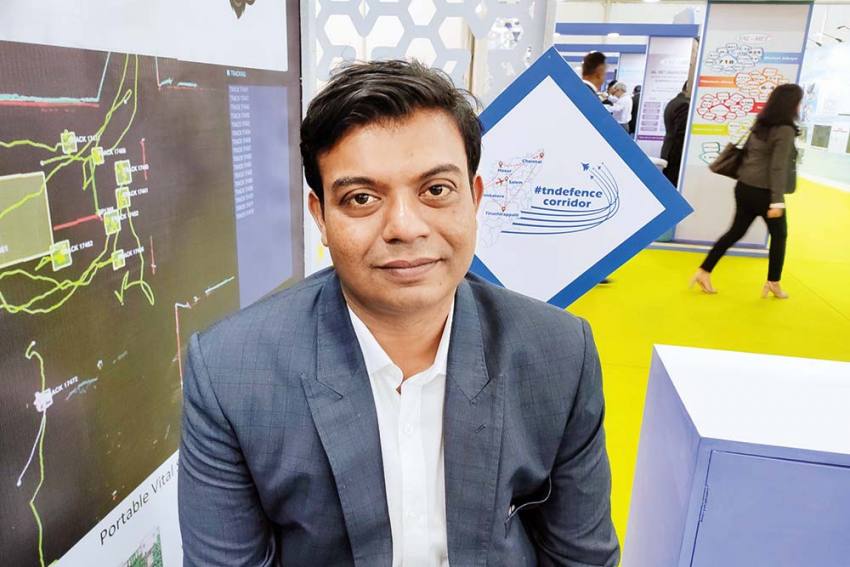 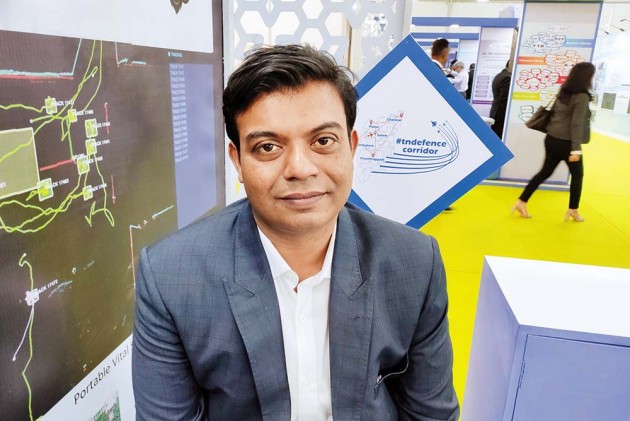 An ultra-light-weight tactical mobility platform designed and developed in India for infantry, paramilitary and police forces.

CLSV is a squad-size custom-build vehicle which integrates the fire support system within each vehicle.

The vehicle is equipped with an artificial intelligent battlefield management system called Manti-core which makes it a collaborative robotic system to fight the modern warfare.

About the Venture and the Growth Aspiration

Mwiven Infra Tech Pvt Ltd is a venture for setting up defence industrial estate for start-ups, and small & medium manufacturing organisations. Like any other industrial estate provider, Mwiven develops plots, turnkey/plug and play factories, office spaces and warehouses along with developing exclusive blueprints for design and manufacturing firms in the aerospace and defence sector.

The end goal of Mwiven is to play a key role in creating a cluster first, which will then facilitate the creation of a big future ecosystem.

The potential of a billion-dollar group is well in the making. Defence sector in India is a whopping USD 50 billion opportunity waiting to be tapped. “Our goal is to be a debt-free billion-dollar multinational corporation. We hope to reach this target by 2025,” notes Mr. Jayaraghavendhar.R

Everyone wants to earn lots of money. Money is one of the important ingredients to lead a happy and comfortable life. Money gives us freedom. It buys time for us to spend with our family. It ensures that our children get good education, and our parents better healthcare. And so on. All of these can materialise only when the place where we live is safe and secure.

We may not recognise the fact that it is our armed forces who gift us safety and security comfort by protecting our borders day in and day out. They even sacrifice their own lives for us.

Iskandann and Mwiven consider it fortunate to be in the defence sector as it given them the opportunity to think of the armed forces and their safety constantly as they design and develop products and services in order to make their lives safe, secure and comfortable in pursuit to win them battles. For them the credo is, “Let us sweat, so they don’t bleed”. In defence, it is not merely about making money. The defence sector presents these Start-Ups with much more!

There is scope for more start-ups to blossom in the defence sector, as Indian armed forces are in constant need of innovative products and solutions.

The presumption that the defence sector is not cut out for the start-ups and instead is more suited for the well-established players with deep pockets with access to foreign technology is without foundation. “I too had such an impression in the beginning. But nothing could be farther from the truth. From my experience, I can tell you that this sector in India is open for anyone who has ideas,” says Jayaraghavendhar

Contribution to the Exchequer

India currently imports most of its defence merchandise. In value terms, India currently imports around 70 percent of its high-tech defence hardware. If Indian companies can contribute even a rupee to the exchequer and add value to our defence forces will be a nation-building exercise. Every rupee saved from going out can be utilised on some welfare schemes here.

The Government of India is greatly encouraging manufacturing and indigenization in defence. There are programmes like Make in India and Tamil Nadu has been announced as one of the states for defence production corridor. The State government has also declared Chennai, Salem, Trichy, Coimbatore and Hosur as the designated areas for the defence industries. There is a new entity created called “M-TIPB” to facilitate MSMEs and start-ups in availing grants and obtaining various clearances.

No doubt that India has to do some catching up with countries like Israel, the US or China in defence technology. If anything is preventing India from becoming a major defence player, it is our mindset. Most breakthroughs in any sector have come from the places where you least expected and the well-funded organizations and teams often fail to deliver.

We must remember and take pride in the fact that India was a leader in defence technology. I can cite the invention of the Mysorean rocket. It was the first solid fuel military rocket technology with a range of up to 2 km anywhere in the world in its time. It was developed in Mysore in 1750’s. This was also the world’s first iron cased rocket. It was far more advanced than any European technology of that age. Indians had also built mobile rocket launchers that could launch 10 rockets at a time.

By the way, they had also created regiments that specialized in rocket attacks. There were about 200 rocket men in each brigade in the Mysore army. They even had a manual called “Fathul Mujahideen” that was meant for the rocket men. The manual detailed the techniques to use the rocket -- the launch angle and the curve that determined where the rocket would land, and so on. These technological advancements prevented the British East Indian company from capturing the Mysore kingdom for 19 long years. 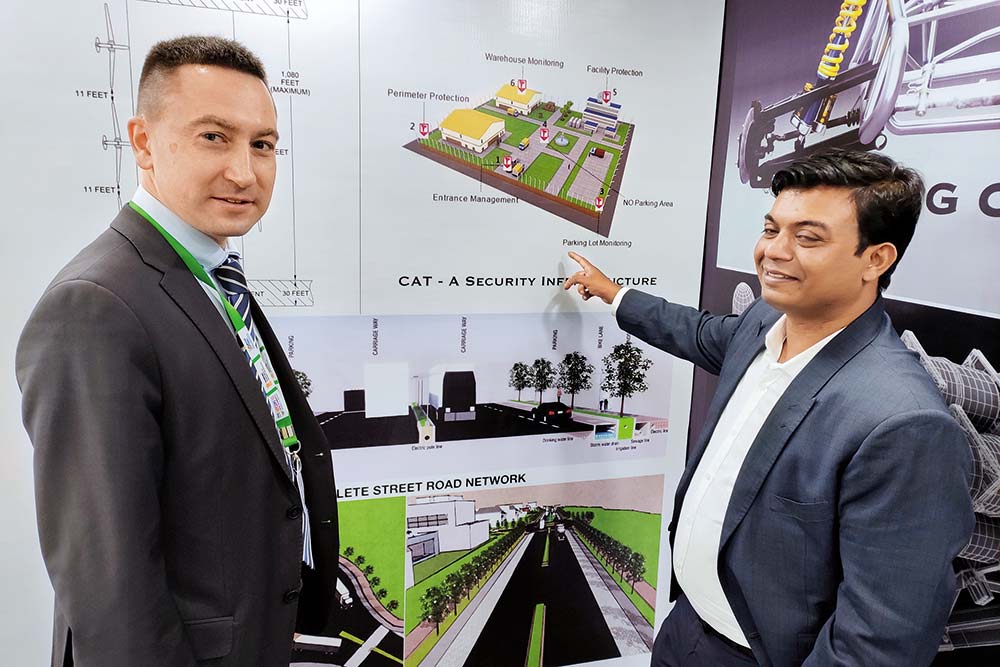 It is time to regain the past glory and technology remains the key. Innovation is the only way to add value. In the group, the attempt is to be the early adopters of the latest technology and bet on R&D. It is much more essential today than it was in the past because the demands and expectations of the customers have gone up. In order to be relevant, the need is to develop the solution in advance. The Start-Ups remain vigilant to realize the problems of the customers before they themselves do, and create futuristic solutions to address them.

But at the same time, these Start-Ups have to realise that they are not always paid for the great ideas and wonderful products alone. They are paid for solving the problems of its customers. Change is the only constant. They have incorporated scrum 2.0, a framework for managing processes involved in any knowledge work. This helps them improve their offerings on a biweekly basis. They believe in continuous improvement where they become their own competition.

As for their production infrastructure, they are an Industry 4.0 company. Their industrial estate is designed for automation, neural network-based robotic systems, and the Internet of Things. In their production facilities, they adopt extreme manufacturing. They are a 100 percent automated and cloud-driven organization. They are enthusiastic about the potential of block chain and Big Data in the defence sector.

On the Start-Up Journey

Running a Start-Up is a big endeavor as it sets out to achieve something big with limited resources. The failure rate is huge. Nine out of ten start-ups fail. So, the start-ups have to necessarily accept failures as a learning and strive towards delivering the promises.

Success or motivation is not all about winning alone. It is about achieving results consistently over a period of time. And consistent performance is a product of self-confidence.

In 2000, they started the company as a web design and hosting company, and the promoter, Mr. Jayaraghavendhar was just 19 years old. Then the word start-up was not even popular. People like him were considered misfits. It has been a long journey with his own share of successes, failures, mistakes, and learning. The biggest problem with entrepreneurship is one’s unvalidated hypothesis.

Deliverables are important for start-ups. They can eventually lose people when they pursue something in the name of passion but without testing their ideas in the market. People who might have believed and vouched for the team emotionally and financially, become tired and leave when the start-up in question does not deliver. Hence, time is the most valuable asset for a start-up. If it fails to deliver on time, it will not survive.

Their biggest learning in start-up business over the years are three: one, create a deliverable value as soon as one can. Two, build a team that believes in the promoter and the company and is willing to walk that extra mile. And three, have a strong culture that is driven by values and not by returns alone.

A start-up should have people with common beliefs and shared values. In Indian Army, there is an engineering regiment called Madras Sappers. It was established in 1780. It is the oldest corps of engineers. The members of Madras Sappers are called Thambis which means ‘younger brother’ in Tamil. Thambis work as a family. They accompanied the British Indian Army wherever it went. Their job was to clear any hurdles that the forces faced.

They were the ones who invented Bangalore torpedoes, the little tubes filled with explosives that the Allied Forces used to clear barbed wires, traps and landmines in World War II. The torpedoes played such a crucial role in helping the Allied Forces defeat Hitler’s Germany. At organizations like Madras Sappers, there was no concept of workers. They could achieve such huge feats because they were like a family.

It is important for organizations to create a family-like environment, where everyone feels safe and respected. Cultivating right values are essential in building a culture. Job security can play big role favourably in organisation building. Lying, faking or hiding about the abilities can prevent from achieving the goals. “It is better to be seen as an idiot than a know-all,” suggests Mr. Jayaraghavendhar

The company has adopted the United Nations 2030 Agenda for Corporate Social Responsibility. It is an integrated approach towards achieving 17 sustainable development goals. They have an independent director who handles the CSR department.

‘Affordable Healthcare Is At Our Core’