Not A Candidate For Prime Ministership

The new BJP president on the challenges facing his party, infighting among second generation leaders, ideology, relationship with the Sangh, Advani, Uma Bharati and much else 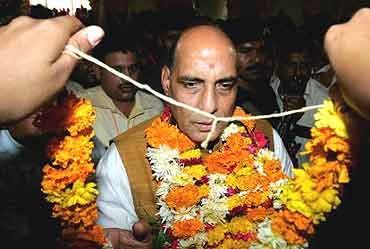 Nagendar Sharma: Would the BJP’s new and second generation leadership be able to deal with the challenges faced by the BJP ?

Rajnath Singh: Well, there is no challenge as such. There are times of ups and downs in the life of any movement or political party. I think the party leadership, which works as a cohesive team, would be able to collectively overcome the challenges which you say are being faced by the party now. The BJP would soon be a ship sailing smoothly.

Listener from Delhi: Sir, three basic issues of the BJP – Ram temple construction at Ayodhya, abrogation of Article 370 & Uniform Civil Code – are raised only when the BJP is in opposition. You were in power for six years, why was there no progress on these then ?

Rajnath Singh: I want to make it very clear that BJP has not given up any of the basic issues. The ideology and philosophy with which BJP was formed would continue to guide the party. The NDA government was not a BJP government, it was a BJP-led government, and we were dependant on many allies to remain in the majority. We were running a coalition government, and coalitions only work when there is a minimum understanding among the alliance partners. However, this does not mean that the party has given up any of its basic issues.

Listener from Chattisgarh: The second line of leaders in the party are engrossed in a serious power struggle amongst themselves. Isn’t this tarnishing the towering personalities of Atalji and L K Advani? How would you work as a president of a party plagued with infighting?

Rajnath Singh: First of all let me make it very clear that there can be no comparison between the political stature of Atalji and Advaniji with that of second line leaders. These two leaders have done so much for the party and the society – there simply cannot be any comparison there. Also, let me tell you, there are no differences among the second generation leaders, whether it is Pramodji, Arunji or Venkaiahji all of them are cooperating with me. Media is definitely trying to project differences, where none exist. The proof of this is that I was unanimously elected the president of the party, and today it is difficult to find such an example of collective functioning in any other political party.

Nagendar Sharma: Is Mr Rajnath Singh BJP’s candidate for prime ministership during the next general elections, as your party says the UPA government would not complete its full term?

Listener from Surat: What kind of relations would you keep with the RSS, given that L K Advani had to quit the presidentship after his Jinnah remarks were disliked by the Sangh? Also why was Uma Bharti thrown out like this from the party despite her having worked tirelessly for the party?

Rajnath Singh: So far as the BJP is concerned, the Jinnah episode is a closed chapter for us. Advaniji himself made it clear in his Mumbai press conference that the way he should have communicated his thoughts on the subject, possibly, could not happen. On the Uma Bharti matter, I would not like to make any comment because the decision had been taken well before I became the party president. The decision on Uma Bharti was taken at the highest forum of the party, the BJP parliamentary board. At times such decisions which appear to be harsh have to be taken, even if we do not like them. While working for a political party, you are bound by certain principles, the Lakshman Rekha which is drawn should not be encroached.

Listener from Karnataka: There is a common perception that the BJP works under constant pressure from the RSS. How much pressure is there in day-to-day functioning of the BJP?

Rajnath Singh: There has been no pressure from the RSS and there would be no pressure in the coming days also. Being a Swayamsevak myself, I can say with confidence that there is no pressure. As a Swayamsewak, when we are faced with a problem, we discuss that with the RSS, the world’s largest socio-cultural organisation, in the same manner as we would do  with our family and friends. But one thing is clear, the RSS never interferes in the functioning of the BJP. We discuss and would continue to discuss matters with the Sangh, but to take a final decision is the job of the BJP.

Listener from UP: Has the BJP shut its doors once and for all on Uma Bharti?

Rajnath Singh: Well, the decision to expel Uma Bharti, as I said, was taken by the highest decision making body of the party, the parliamentary board, and the decision was unanimous. Now if we receive any application, any representation from Uma Bharti seeking her re-entry, the parliamentary board would definitely consider the issue, beyond this I would not like to comment further on this.

Listener from Assam: Mr Singh, on what basis does the BJP call the Congress and Left pseudo-secular, when you use the name of religion frequently in your politics?

Rajnath Singh: I do not merely call these parties pseudo-secular, but I call them communal as well! The Congress and Left parties are doing caste and religion based politics to be in power, that is how they have formed the government at the centre. The Congress character of appeasement is well known to the country since Shah Bano case, and the way the present UPA government has shown disrespect to courts in regarding  reservation for Muslims in Andhra Pradesh, and the latest case of Aligarh Muslim University, shows that the UPA government and parties supporting it believe only in appeasement. We are saying that the politics should be based on justice and equality.