By skipping Wimbledon, Pete Sampras might well have pulled down the curtains on a glittering career -- and a chance for a storybook ending 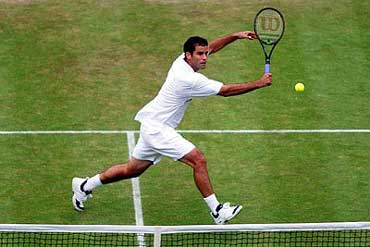 It was a small gesture, a brief, passing moment, but it captured beautifully the doubt, introspection and desperation that once reigned in Pete Sampras’s head.

During a changeover of his second round match at Wimbledon 2002 against George Bastl, a virtual nobody from Switzerland, Sampras, along with towelling himself dry and gulping down water, took out a piece of paper from his kit bag and immersed himself in it. It was a note from wife, Bridgette. It’s not known what she wrote, but the career slump that Sampras found himself in then, it might well have, as another tennis writer put it so eloquently, gone something like this: "My dear husband, seven times Wimbledon champion Pete Sampras…" A honest, gentle, loving reminder of what he meant to her as a person and who he was as a player.

By his own admission, Sampras had never previously read anything on a tennis court. Perhaps because he had never needed to. Since serving notice to the tennis world in 1990, his career graph had soared, and kept soaring, with hardly any interludes that would lead to knives being drawn or obituaries being written. Till then, that is.

Going into Wimbledon 2002, the cloak of invincibility that Sampras had worn through the nineties, as comfortably as his Nike whites, was gone. It had been two years and 33 tournaments since he had won a title, and Wimbledon was his best shot to set the record straight.

But here he was, staring at defeat, in the very place he had come to own like no other man. He sat, slumped in his chair, a faraway look on his face. His career was on the rocks, his legacy in the danger of being tarnished and the criticism reaching a point where his marriage was being blamed for his indifferent performance on court. Sampras lost the match 6-4 in the fifth, but left Wimbledon insisting to retirement-baiters that "I have another Slam in me" and that "I plan on being back".

He got it right -- well, almost. A month later, Sampras won the US Open, beating arch-rival Andre Agassi, and rushed to the stands to embrace a very-pregnant Bridgette. Basking in the mellowness of an unlikely victory and impending parenthood, he contemplated giving into the temptation of going out on this high note.

Eventually, he decided to play on, but didn’t specify a schedule. During the winter, he and Bridgette became parents, and he has probably become as adept at changing nappies as hitting running forehands. But, he hasn’t come back to the Tour yet, routinely pulling out of tournaments, with the latest being from the French Open and Wimbledon.

It might well be the end of the road for Sampras.

It is one thing for Sampras to skip the Australian and the clay court legs; it’s quite another for him to say pass to Wimbledon, specially given the disappointing circumstances of last year. See, for Sampras, Wimbledon wasn’t just another annual stopover on the tennis calendar. Grass was the perfect ally for his natural serve-and-volley game, the hallowed centre court of the All-England Club his backyard, and Wimbledon the perfect follow-up to make up for the annual disappointment of Paris (the only Slam missing from his dossier).

During the nineties, a legion of male tennis players found out, much to their dismay, that if there was a Sampras pencilled in the Wimbledon draw, they had two options: eye the runners-up salver or book an early flight home. Sampras was virtually unbeatable through the decade, winning seven titles in eight years. It was on the grass of the All-England Club that he would demonstrate best what he was capable off, giving master-classes in the dying art of serve-and-volley tennis. Last year’s ignominious exit meant Sampras had unfinished business, and the urge to find redemption might just draw him back.

But things changed after the title win at New York. Sampras made peace with himself on the mediocre phase of his career that culminated at Wimbledon 2002. The need to ‘prove’ himself isn’t as crying as it would have been had he not won the US Open. And that’s why his withdrawal from Wimbledon might well signal the end to a remarkable career.

A total of 14 singles Grand Slam titles, the most by any male tennis player; number one finishes for six consecutive years; 64 tournament wins; an impressive win-loss record of 762-222; member of two winning Davis Cup teams, though he never quite showed the respect or the enthusiasm for this prestigious team tourney; $43 million in earnings, and this doesn’t include endorsements. Barring the French, he’s won everything there is to be won by a tennis player. Regardless, he can look back upon his playing days with great pride and walk away without regrets.

Sampras, though, is still non-committal about calling it a day, leaving himself a small window of possibility, just in case the competitive itch starts to scratch again. Many had thought that the prospect of one last waltz on the Wimbledon grass would draw Sampras from his self-imposed exile. It was a romantic notion, a real-life story-book ending in cynical times, for a deserving tennis player.

It’s a feel-good picture. The greatest tennis player to have played the game, making his final appearance on the courts where he established his dominance, with a chance to achieve closure on an unhappy chapter of his career and sign off the way he waltzed in -- in a blaze of glory.

Sure, he would be rusty, coming of a lengthy lay-off. But still, given his explosive serve-and-volley game, the significance of the occasion and the ever-diminishing number of pure grass-court players, it would take a brave person to not give Sampras a fair shot at Wimbledon.

Ironically, much as Sampras has needed Wimbledon to define him as a tennis player, Wimbledon also needs Sampras -- perhaps, more than ever before. Sampras, with his preference for Rod Laver as idol, clean-cut white clothing and gentlemanly conduct, was a throwback to a more genteel era in tennis. Similarly, Wimbledon is probably the last surviving bastion on the Tour, the one major that hasn’t been kicked around and deformed by rampant commercial interests.

Wimbledon continues to cling to age-old traditions -- not with the airs of a stiff British upper lip, but with charm and grace and purpose. The symbols of this deference for continuity are many and diverse: white clothing, green exteriors that haven’t been defaced by corporate billboards, a passage from Rudyard Kipling’s poem ‘If’ inscribed on the walls leading on to the centre court, the one-day gap between the semi-finals and the finals… And while the powers-to-be at the All-England Club can maintain this status quo, with their overflowing coffers, they are pretty much powerless to counter the other, more significant threat lurking that could diminish the tournament’s enduring uniqueness on the tennis calendar.

It is the reluctance of players to follow their serve to the net and instead, as they do on other playing surfaces, grind it out from the backcourt -- the very anti-thesis of grass court tennis. If this trend continues, and there’s every reason to believe that it will, one of the novelties of Wimbledon -- of showcasing a style of tennis that isn’t favoured by most players on other surfaces -- will surely erode. And that’s where Sampras, as one of the last practitioners of grass-court tennis, is important. The prospect of seeing Hewitt and Nalbandian, or two of their countless clones, gingerly hit ground-strokes from the baseline on the second Sunday is pretty uninspiring.

Sampras hasn’t yet closed the door on his career, though a comeback now is wishful thinking. According to Paul Annacone, his coach, Sampras is in good physical shape, though he’s not tennis sharp. After practising regularly till March, Sampras has slacked up, and has been hitting once a week, just to keep it going. Annacone reckons Sampras needs around two months of consistent effort leading into Wimbledon to stand a chance. A year down the line, the duration of that lead-up effort might well stretch further.

McEnroe, Borg and Becker, before him, all took sabbaticals from tennis after scaling the peak, but none won majors in their comeback. So, there’s are challenge for Sampras -- to win a major after a lay-off, to win again at Wimbledon.

Sampras first came to Wimbledon as a 18-year old in 1989, and this is the first year since then that he won’t be there. Maybe, just maybe, sitting in the cool confines of his Beverly Hills home, watching centre court on TV might stir up nostalgia, make him shadow-swing some aces in his living room and long for that competitive intensity. Maybe, another year of potting around watching Lakers games and handling his business interests might reinvigorate him for one last shot at the big time.

And, if none of that works, maybe Bridgette can scrawl some more words for him, to be read at Wimbledon 2004, moments before he walks up to greet the Duke and Duchess of Kent.