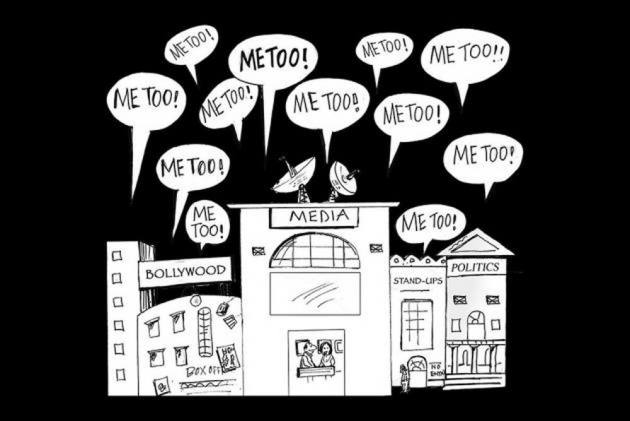 The pushback against the #MeToo wave that has swept through the ranks of the powerful with scores of women narrating their alleged experiences of sexual harassment began Monday with Union minister M J Akbar filing a criminal defamation suit against journalist Priya Ramani.

In Mumbai, character actor Alok Nath moved a civil suit against writer-director Vinta Nanda, who accused him of raping her more than once during the making of her serial "Tara" in the 1990s, seeking a public apology and Re 1 as damages.

As the two men, at the centre of the growing storm against sexual exploitation in the workplace and outside, approached the courts with defamation suits, their accusers said they would not be cowed by the intimidatory tactics.

"By instituting a case of criminal defamation against me, Akbar has made his stand clear: rather than engage with the serious allegations that many women have made against him, he seeks to silence them through intimidation and harassment," Ramani said after the minister of state for external affairs filed his case in a Delhi court.

"Needless to say, I am ready to fight allegations of defamation laid against me, as truth and the absolute truth is my only defence," Ramani said.

Accused by more than a dozen women journalists of sexual harassment and more while he was an editor, Akbar has filed a private criminal defamation complaint against Ramani, who was the first one to name him.

The minister has accused Ramani of "wilfully, deliberately, intentionally and maliciously" defaming him and has sought her prosecution under the penal provision on defamation.

In his first statement on Sunday after returning from Nigeria, Akbar responded to the demands for his resignation by terming the accusations against him "false, fabricated and deeply distressing".

Ghazala Wahab, who wrote a graphic account of her alleged prolonged harassment at the hands of Akbar, wrote in The Wire that Akbar's statement was "rambling" and "full of tired cliches".

The #MeTooIndia handle tweeted that Akbar's defence team has 97 lawyers against Ramani.

Several people, including lawyers, rallied around Ramani, offering help in meeting her legal expenses and some appealed on social media for crowd funding.

"It is not about agreeing or disagreeing. He has presented his version," Bharatiya Janata Party spokesperson G V L Narasimha Rao said in the party's first reaction to the allegations against Akbar.

The pressure for his resignation continued to build up.

Women's rights activist Vani Subramanian told PTI she is not surprised by Akbar moving court as "such people tend to react in this way when their power and entitlement is challenged".

In a joint statement, journalist organisations Indian Women's Press Corps, Press Club of India, Press Association and South Asian Women in Media asked for an impartial probe into all the complaints without "fear of threat or intimidation to the complainants".

"We also feel that in the interests of a fair probe, moral and public propriety, it is only proper and appropriate that the minister step down from his post till as such time the probe is completed," it said.

The ripples were inevitably felt in the Hindi film industry, where the movement began with Tanushree Dutta levelling allegations of harassment against actor Nana Patekar during a 2008 film shoot.

Dutta's account opened the floodgates with Subhash Ghai, Sajid Khan and Rajat Kapoor along with Nath being "outed".

Nanda's lawyer said in a statement that the case filed by Nath, who has made a name for himself playing the gentle father and grandfather in numerous Bollywood films, would be fought legally and her client won't be intimidated by threats and defamations suits.

"The so called defamation proceedings are not served upon us as yet - however and whatever the proceedings will be, we will deal with everything following due process of law," Nanda's lawyer Dhruti Kapadia said,

Actor Simran Suri, one of those who accused Sajid Khan of harassment, said threats of defamation will not discourage the strong women who have finally decided to come out and speak.

"The truth remains the same and there’s no looking back now.... We’re all with Vinta Nanda," Suri told PTI.

Filmmaker Nishtha Jain has accused Dua of harassing and stalking her almost three decades ago.

In a statement, Dua's daughter, comedian Mallika Dua, called out Jain for dragging her in the controversy.

Mallika, however, said she stands with the #MeToo movement and will let her father fight his own battle.

Kaushal said he has always tried to be a good person, both professionally and personally but if he has ever hurt anyone, he would like to apologise unconditionally.

In the South, more than 200 Carnatic musicians have signed a statement urging women to come forward with their stories.