So, we have a new T20 World Cup champion on Sunday night in Dubai -- Australia. The Aussies, who have won five 50-over World Cups, never got the opportunity to lay their on the T20 World Cup before, and today they were able to do it for the first time in history defeating New Zealand by eight wickets. One should feel bad for New Zealand, the most consistent team in the world across formats. The Kane Williamson-led side finished runners-up in the 2019 World Cup (ODI) final, won the ICC World Test Championship earlier this and today were again on the receiving end.

Unlike the other matchdays in Dubai, the pitch today was dry meaning it would help the batters. Shane Watson, in his pitch report, said that the middle overs would prove crucial and that's exactly what happened for both sides.  Batting first, New Zealand lost Daryl Mitchell in the powerplay but skipper Kane Williamson proved to be the messiah for the Kiwis with an astonishing 48-ball 85 to power the team to a competitive 172/4 in 20 overs. Josh Hazlewood, who dropped Williamson on 17, went on to pick three wickets for 16 runs.

In reply, Australia started on a disastrous note losing Aaron Finch cheaply. But that was not a problem for David Warner and Mitchell Marsh as the duo just took the game away from the New Zealander. Not only did the Warner-Marsh pair rotate the strike but also ensured they keep the run rate in check. Although, Trent Boult picked both the wickets for New Zealand, but that wasn't enough as Marsh stayed till the end ensuring his team over the line with seven balls to spare. Glenn Maxwell hit the winning runs.

Annnnndddddddd Australia lift ICC T20 World Cup title for the first time ever.  Celebrations all around. That's all from this edition of the T20 World Cup. Hope you have enjoyed the tournament. Signing off, goodbye!

Aaron Finch (AUS captain): This is huge to be able to become the first Australian team to do so. Warner is outstanding. I can't believe people wrote him off a couple of weeks ago.

Kane Williamson (NZ captain): We were trying to get a platform and the surface was holding a fraction. But typical to here in Dubai. At the halfway stage we thought we have got a good competitive total. Only to be chased superbly by Australia. They're a fantastic side.

Player of the Series: David Warner

I always felt I am really well. Didn't get much time in the middle in the two practice matches obviously. But for me, it was about going back to basics. Going to hard, synthetic wickets and try to hit some balls.

Player of the Match: Mitch Marsh

I don't have words right now. I have got an amazing few weeks with Australia now and the hard work paid off.  It's unbelievable.

Matthew Wade: The win is huge. A lot of people wrote us off but happy to do this for Australia and it really feels special.

Marcus Stoinis: We love each other. Mitch Marsh's family is here to cheer for him and we are really happy for him.

Steven Smith: A lot of people wrote Warner off but he came in with exceptional intent and took the game away at the start.

Josh Hazlewood: There's always pressure, the batters come at you and we kept the powerplay to 40. Kane is a superb player, has been for a long time, it was a classical Kane innings.

Emotions for Australia. They have waited for this title for a whole 14 years. Mitch Marsh, David Warner, Matthew Wade, Marcus Stoinis, Adam Zampa and others. The whole Australian team have stayed as a unit and they deserve it.

Australia win the T20 World Cup for the first time ever, win by eight wickets against New Zealand in the final.

Trent Boult puts Mitch Marsh down. But that wouldn't have made much of a difference. The damage has already been done. Mitchell Marsh (69*) and Glenn Maxwell (22*). Australia 159/2 (17).

After Mitch Marsh and David Warner, Glenn Maxwell joins the party. The hard-hitter clobbers two fours off Tim Southee as New Zealand are slowly losing it away. Australia 149/2 (16). Need 24 from 24 balls.

It's Australia's game now. With Mitch Marsh batting at 61 not out, Australia are well on course for a victory with 37 runs needed from 30 balls. Australia 136/2 (15)

Huge wicket for New Zealand. Trent Boult comes into the attack and breaks through David Warner's defence. The Aussie goes for 53. Australia 107/2 (12.2)

David Warner hits two fours and six as the Aussie opener nears fifty. Remember this is the same Warner Sunrisers Hyderabad discarded in the IPL 2021 a couple of months ago. 77/1 (9)

Brilliant comeback by Adam Milne. After being hit out of the park in his first, the pacer concedes just runs to finish the powerplay. Australia 43/1 (6)

Don't take Australia lightly in a final like this. David Warner pulls Tim Southee for a huge six. Australia take 10 runs from the over, 40/1 (5)

No No No! Not ideal for Australia. Skipper Aaron Finch goes for just five. He pulls a short-ball from Trent Boult only for Daryl Mitchell to take a running catch. Australia 15/1(3)

Perfect start for New Zealand. Just a single in the first over chasing 173 to win. Australia 1/0 (1)

For New Zealanders, Chris Cairns says he is 'very lucky to be alive'

What a show by New Zealand in the second half of the innings that completely belonged to Kane Williamson who's 85 off 48 balls power the Kiwis to 172/4 in 20 overs. Josh Hazlewood is the most impressive bowler for Australia with 3/16 in his four overs. This is also the highest total in a T20 World Cup final.

Here's what Ravi Ashwin thought about Kane Williamson's THAT four!

Two in the over for Josh Hazlewood. He dismisses Glenn Phillips for 18 first before packing dangerous Kane Williamson or 85. New Zealand 148/4 (17.4)

What's more impressive by this New Zealand side is that run flow hasn't stopped despite some top bowling from the Australians. Glenn Phillips now joins the party with a four and six from Adam Zampa. New Zealand 114/2 (15)

What a way to bring up fifty in a T20 World Cup final for Kane Williamson. The skipper hits Glenn Maxwell for back-to-back sixes to take 16 runs from the over. New Zealand 97/2 (13)

Breakthrough for Australia! Martin Guptill hoists Adam Zampa on the leg-side but finds Marcus Stoinis just inside the rope. Guptill goes for 28 from 35. New batsman in is Glenn Phillips. Just 5 runs from the over. New Zealand 81/2 (12)

Dropped. Josh Hazlewood puts down Kane Williamson at the boundary. Three back-to-back fours by Williamson off Mitchel Starc. 19 runs from the over for New Zealand. Kiwis 76/1 (11)

Brilliant start from Adam Zampa. The leggie has been at his best for the Australians in this tournament and he starts with three runs in his first. New Zealand dealing only in singles now, 40/1 (8)

After Daryl Mitchell's wicket, New Zealand have gone into the shell. Kane Williamson and Martin Guptill in the middle. More than 20 dot balls already for the Kiwis. New Zealand 37/1 (7)

Superb stuff from Hazlewood. Doesn't bowl too wide, not trying too many things, just doing the basics. Only two runs off the final ball of the Powerplay. New Zealand 32/1 (6)

Excellent start from Pat Cummins just concedes two runs. He maintains a tight line and length, keeps the opposition in check with his cross-seam. Others please note! New Zealand 30/1 (5)

Daryl Mitchell starts from he finished in the semifinal. Pitched full by Glenn Maxwell, Mitchell just tonks the ball over the bowler's head for a huge six. Four singles apart from that in the over. New Zealand 23/0 (3)

Pretty confident start by the New Zealand openers Martin Guptill and Daryl Mitchell. Just a boundary in the first over by Mitchell Starc. New Zealand 9/0 (1)

Kane Williamson (NZ): We will try to get a competitive total on board. It is a shame that Conway is missing but as a team, we have to move on and focus on the challenge at hand.

Aaron Finch (AUS): I don't think the pitch will change much as the game progresses. The way we hung in the contest and take it deeply was crucial for us.

Australia win the toss and they will bowl first

The strip is a bit dry, unlike the others that have been played on previously in this tournament. The middle overs are going to be crucial for both teams, reports Shane Watson.

David Warner: It's all about delivering every time what I can. The trend at this ground is that the powerplay is not high scoring and it is about minimizing damage. 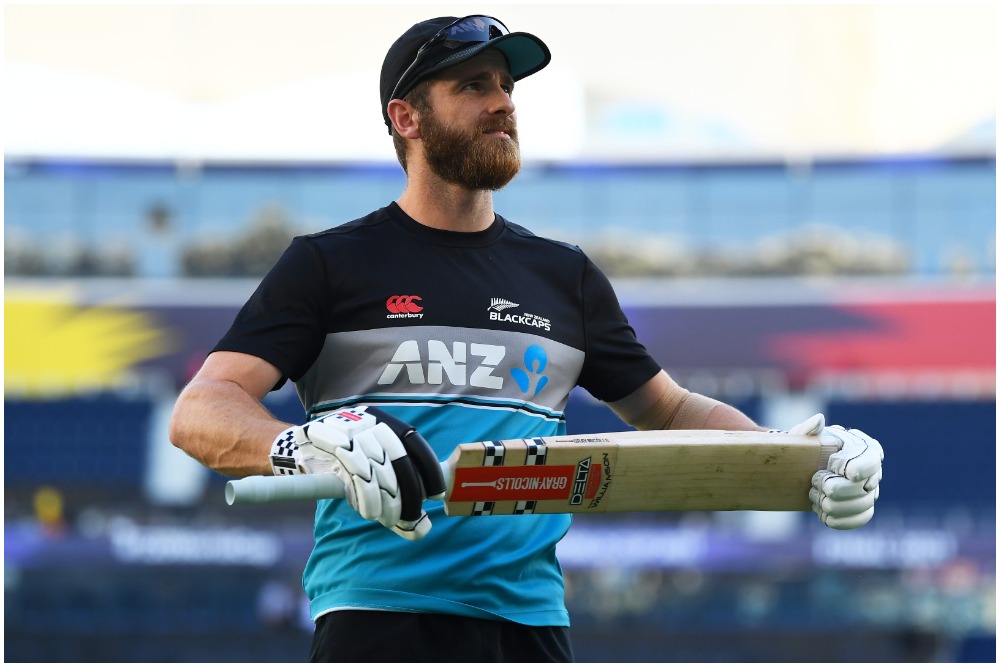 FYI: The T20 World Cup 2021 Final is a 3 AM start in New Zealand and a 1 AM start in Australia. Surely, the two countries will be awake the whole night. Whoever wins, it's going to be a national holiday the next morning (not sure though).

18: 42 PM IST: The last time both New Zealand and Australia met each other in an ICC tournament summit clash was during the 2015 World Cup (ODI) final. While the Australians won that day under now-retired Michael Clarke, it's time for revenge for the Black Caps today in Dubai. Check out what's in store for the two teams in the final.

Jimmy Neesham: One game to go and I'm sure there will be a bigger outpouring of emotion if we manage to get across the line.

Since BCCI are the T20 World Cup 2021 organisers, let's update with some stories related to Indian cricket. Former India batsman VVS Laxman is likely to be appointed as National Cricket Academy head while BCCI will hold its AGM in Kolkata on December 4.

Vs South Africa – Won by 5 wickets

Vs Sri Lanka – Won by 7 wickets

Vs England – Lost by 8 wickets

Vs West Indies – Won by 8 wickets

Vs Pakistan – Won by 5 wickets (semifinals)

Vs Pakistan – Lost by 5 wickets

Vs India – Won by 8 wickets

Vs Afghanistan – Won by 8 wickets

Vs England – Won by 5 wickets (semifinals)

Hello and welcome for the one last time in this ICC T20 World Cup. It's the big finale in Dubai as the world will get a new champion in the shortest format of the game. Will it be New Zealand? Will it be Australia? Whoever wins the trophy, will carry the title home for the first time.

The eerie similarity in which New Zealand and Australia have advanced to the T20 World Cup 2021 final is reason enough to say that there are no favourites in tonight's final. This is New Zealand's third straight ICC final while Australia are in the title round of an ICC event after winning the 50-over World Cup in 2015.

Purely on form, both NZ and AUS deserve to be in the final. Both teams scored sensational come-from-behind wins and that will add a huge slice of confidence to the Trans-Tasman rivals.

While Daryl Mitchell and Jimmy Neesham gave the Kiwis some late flight against England, Mathew Wade and Marcus Stoinis conjured a magic partnership to stun Pakistan in the semifinals.

There are several match-winners on both sides and while Australia will depend on its top order batting, where David Warner has been outstanding, New Zealand will bank on their well-rounded bowling attack, led by Trent Boult, the third highest wicket-taker of the tournament with 11 wickets in six matches.

New Zealand will surely miss Devon Conway, the versatile keeper-batsman who played a big role in the Kiwi campaign till he broke his hand in frustration. New Zealand have never beaten Australia in four previous knockout matches in ICC events.