Way back in September 2006, we had asked if the Rushdie-Padma Lakshmi honeymoon was finally over. It is now official that it is. 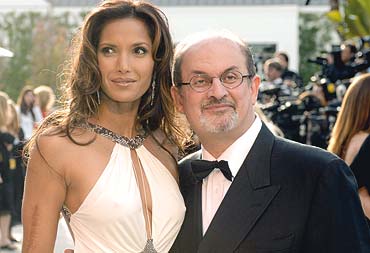 Salman Rushdie never seems to be out of the headlines, and more so for reasons outside the literary domain. Barely had the controversy about his being selected for knighthood by Britain's Queen Elizabeth subsided a bit, that he is back in news. And this time it is about his fourth marriage coming to an end.

Way back in September 2006, we had asked if the Rushdie-Padma Lakshmi honeymoon was finally over. Sir Salman's  spokeswoman Jin Auh has confirmed that to be the case in a statement issued on his behalf today. Rushdie, who was not Sir Salman yet, had then responded in an interview to the Time of London, to the story as follows

"Oh, for f***'s sake. All I did was say to some journalist that in the last couple of months we haven't seen much of each other because she's been making a TV series in LA. It's kind of difficult. It's difficult for any working couple to deal with this question of separations. But actually, there is no "splitsville". We are extremely happy. We are here. She is here. We are living in the same place in New York. Anish had lunch with us yesterday. Everything is fine.One of the things I knew when Padma and I got married was that the next story would be that we are splitting up. Otherwise there is no story: "People living together happily. The end." But we're fine, thank you."

The statement issued on his behalf today says that "Salman Rushdie has agreed to divorce his wife, Padma Lakshmi, because of her desire to end their marriage. He asks that the media respect his privacy at this difficult time."

Rushdie, 60, married Padma Lakshmi, a former model born in 1970 in India, in 2004. She is his fourth wife and the couple have no children.