Our resident Conspiracy Theorist alleges that the unbeaten partnership of 403 runs between Virendra Sehwag and Rahul Dravid is proof of a vile, vicious and malicious conspiracy against Bengal. 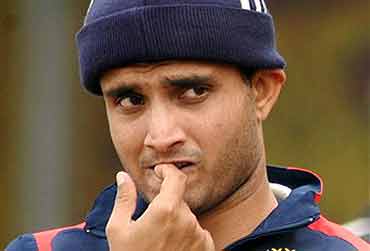 Can't you see the obvious? Do you remember those televised images of the 'animated discussions' between Sourav Ganguly, Rahul Dravid and Greg Chappell? Of course, everybody knows that Ganguly wanted to open the innings, but no body knows why. Let me share the secret with you.

It's a conspiracy at the highest levels. The intent was to take Sourav Ganguly into the team at the cost of the specialised openers who had both scored assured half-centuries in the only practice match before the Lahore Test, and then to make it seem as if Sourav was once again chickening out by refusing to open. Which explains the patently false rumour before the beginning of the Test that the pitch would favour the Pakistan pacers. The captain was then to gallantly offer to open, thus becoming a hero in the eyes of the gullible public, which is what he has gone on to do.

But the dark facts tell a different story altogether. It is reliably learnt that the conspiracy involves the highest echelons of powers that be, including ISI, the sugar lobby in Pakistan, our agricultural minister who's also the BCCI chief, the groundsmen at Lahore and sundry TV channels and journos.

Given the involvement of so many people, the secret leaked and Dada had been tipped off by the Dalmiya camp that the pitch was a graveyard for the bowlers, and a batsman's dream come true, and hence the fight to open the innings. Highly placed sources tell us that Dada was convinced that he could put up a defiant show and would definitely have at least made a valiant 40 runs had he been allowed to open, along with ensuring that at least a couple of partners were run out.

It does not just stop there - this vile, vicious, and malicious conspiracy runs deep. Real deep. We all know that the world record for opening partnership stands in the name of a Bengal stalwart Pankaj Roy (along with one Vinoo Mankad) and it would be apparent to any student of the game that this is an audacious ploy to remove his name from record books.

We, the cricket lovers of Bengal, hereby demand that India should declare its innings at 412 for no loss. We should take a leaf from Mark Taylor's book when he decided not to break the then highest runs for Australia in an innings standing in the name of Sir Don Bradman and had declared the innings. But, to be on the safe side, India should declare the innings only on the condition that Pakistan would enforce the follow on. This time, our beloved Dada, Sourav Ganguly, should open the innings along with the unscrupulous usurper. All is fair in love and war, and this is war: Dada would not really have any trouble in sorting him out with a call for a sharp single or two.

If Pakistan refuses to oblige, the least that Viru and Jai (sorry, Rahul) can do is for one of them to retire at 412 and allow Dada an outing in the middle. This is the bare minimum that ought to be done if the 50 year-old legacy of Pankaj Roy's world record is to be preserved and the honour of our only hero, Bengal Hriday Samrat, Dada Sourav Ganguly is to be restored. This would also win them the undying gratitude of the Pakistani bowlers who would at least have a fair chance of not going wicketless.

In view of the above, given the gravity of the situation, we hereby appeal to all to bring all the pressure they can on the BCCI chief to issue necessary directives to the coach, the captain and the vice-captain. Time is of the essence, and therefore instead of putting this petition on petition.com, we urge you to circulate it widely to friends and foes alike in the everlasting memory of Gurudeb Rabindra Nath Tagore and Immortal Hero Netaji Subhas Chandra Bose.

Show that your heart bleeds for Bengal! Act Now!!.Send out this mail to everyone on your address book immediately!!!

Post Script: My attention has been brought to the mischievous propaganda indulged in by one of our star news channels who apparently requisitioned the services of a lip-reader to show that Dada was actually goading Dravid to open the innings. While it is yet another tame and lame attempt to besmirch the fair name of our hero from Bengal on the part of the concerned channel - haven't we heard enough about how tapes can be doctored from say Jaya Jaitley and BJP? - may I please point out the obvious? The lip-reader only confirms, validates and vindicates my stand. Dada, as I have already revealed above, had come to know that the pitch was going to be a batsman's delight. Which is why, he only showed his benevolence, graciousness, large-heartness and willingness to let somebody else take credit for his selfless act of sacrifice. It only shows his spirit of camraderie for the man who till recently was his deputy and proves once again how Dada is willing to put the team's interests above his own. Now, if only the captain had reciprocated his gesture!