A skilled orator with a 56-inch chest is an unbeatable combination, especially when the speechifying involves a great deal of chest-thumping. 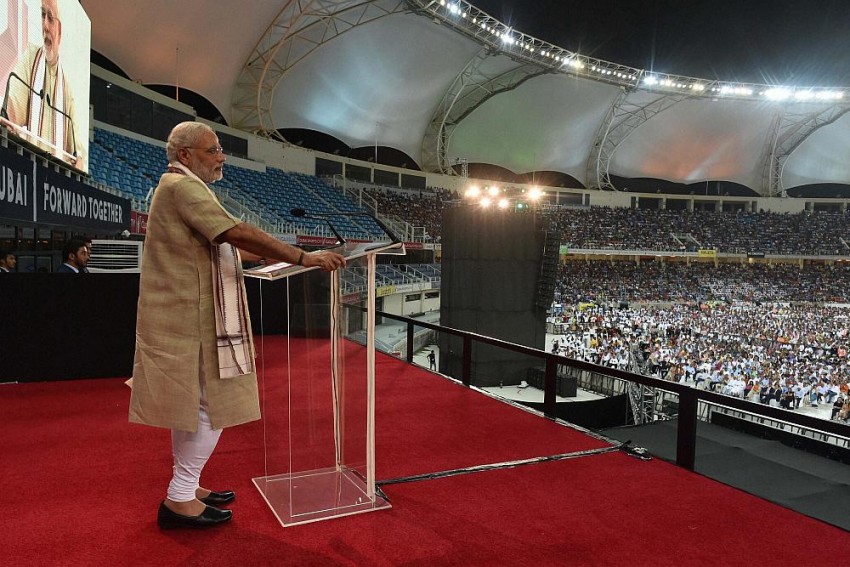 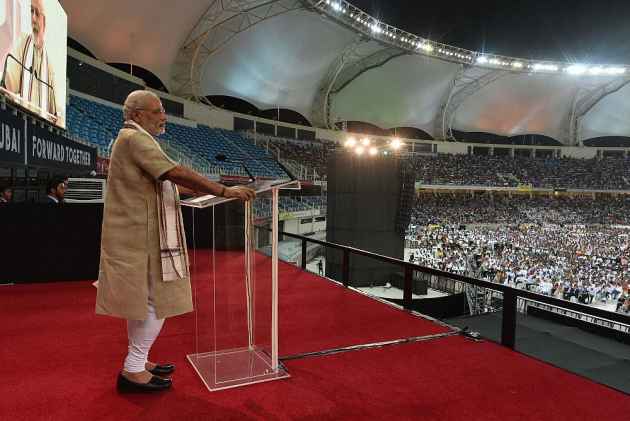 Watching Prime Minister Narendra Modi's speech in Dubai and the one he delivered two days earlier on Independence Day in Delhi was a study in contrasts. In Delhi, it was a lesson in chest-thumping muscularity, flinging his arms out wide as if to acknowledge his expanding universe while addressing a domestic audience, a two hour tour de force, totally extempore. In Dubai, he was more relaxed, the muscularity more controlled but projecting a more fatherly figure, resting his arms on the lectern and leaning forward, as if getting closer to his NRI countrymen, leaving a lot more pauses so the frequent applause would not disturb the flow of words, and establishing an instant rapport with the audience.

Oratory is Modi's great talent, a gift that very few politicians are blessed with. With the addition of crowds-pleasing optics, artfully chosen backdrops and his inherent histrionics, his every speech becomes a spectacle, a conversation piece and an invitation to search for hidden meanings. In contemporary politics he has no equal in the art of oratory, which is surprising considering that us Indians love talking.

Traditionally, India was a land of story-tellers, passing on knowledge and news by word of mouth rather than written texts. Today, we just have to turn every evening to our television news channels to see what a vocal society we are, the Argumentative Indian, as Amartya Sen called us. Our population and crowded cities means we are assaulted from all sides by sounds, from slick-tongued salesmen selling us wares, to youngsters strutting around mouthing dialogues from the latest Bollywood flick, thela wallahs advertising their eatables, the snake oil salesmen selling magic potions and aphrodisiacs, and the traditional daily assault on our ears from the wandering minstrels disguised as raddi buyers or vegetable vendors and fruit sellers.

All across India, the practice of oratory is alive and well. Politics has always been where it makes the most impact. Kennedy and his Ask Not What You Can Do For America speech, Martin Luther King and I Have A Dream, Obama and Yes We Can. India was well served at the start, with Nehru being the brightest and the best of the legendary freedom fighters. His Tryst With Destiny still brings tears to the eye, despite the awful recording by All India Radio. Gandhi spent most of his life delivering speeches and sermons, although as an orator, he was nowhere in the class of his great foe, Winston Churchill.

Down south, the unquestioned champion of oratory was Dr C. N Annadurai, erstwhile chief minister of Tamil Nadu, commonly referred to as Anna. He scripted and acted in several plays. Nehru hailed him as one of the great parliamentarians for speeches in the Rajya Sabha while Selig Harrison, the US-based analyst of South Asian and East Asian politics said: "There is no doubt that this powerful orator is the single-most popular mass figure in the region" He was equally eloquent in English, and not just in Tamil.

Jayaprakash Narayan was a stormy petrel, capable of rousing anger and emotion, but as an orator, he was not quite in the league of Nehru, or even Subhas Chandra Bose. Indira Gandhi may have been a strong-willed leader who stood head and shoulders above her contemporaries, but she was no great orator, reading out from prepared speeches. Her son Rajiv made one brilliant speech (I Am Young, I Have A Dream) at the joint sitting of the Senate and the House of Representatives in Washington shortly after becoming prime minister, but faded out in terms of eloquence after that.

In contemporary politics, the BJP has certainly had the edge. Former Prime Minister Atal Bihari Vajpayee's command of the language, especially Hindi, his touches of humour and sarcasm made him one of the best orators India has produced in recent years. His speeches in parliament, like the one he delivered after India's nuclear test, are memorable for their language and power to charm, cajole and influence. He made the lengthy pause the most effective bit of silence ever invented.

Vajpayee's party colleague Arun Jaitley once wrote: "He was unquestionably the greatest orator India has heard since Independence. He could play with words but he was always measured. He was a wordsmith. He never fell into the temptation of committing an impropriety. His ability to rise above the party for a larger national cause was significant."

If Modi has any rival in terms of oratory and public speaking than it can only be Shashi Tharoor, who's speech at the Oxford Union debate on the legacy of the Raj not only went viral but was praised by none other than Modi himself! That one speech has triggered an avalanche of articles in the British and Indian media (including Outlook), all of them countering his stand on reparations owed to India. Tharoor was a star debater in St Stephen's so his credentials are well established, helped, no doubt, by his plummy accent.

Alas, very few of his colleagues in parliament or outside come anywhere close in terms of oratorical skills. One certainly is Laloo Prasad Yadav. The former Bihar CM is no less eloquent, even if his style of delivery and content is more rustic in nature. Earthy but endearing is what would best describe his oratory but it is a gift that has kept him in the forefront of Bihar politics and in the national eye for well over two decades. It is what sets him apart from most regional leaders, including his frenemie, Nitish Kumar.

By that yardstick, the best speakers in the current political firmament are from the Left and the Congress. In Parliament, Sitaram Yechury is a delight to listen to for his sense of humour, his erudite mind and his ability to put the government on the back foot. His only rivals would be former UPA ministers Jairam Ramesh and Mani Shankar Iyer. Ramesh has authored many books and has the gift of impassioned argument, bolstered by his deep knowledge and study of a range of subjects, from economic policy to environmental issues. He can produce facts and figures like a magician produces rabbits from a hat, thanks to an amazing memory and a brilliant mind.

Iyer is another who is extremely erudite and his years in the foreign service have only broadened his horizons. As a speaker, he is in great demand and his self deprecation and wicked sense of humor, puts him in a league of his own.

Possibly the least effective public speaker was Manmohan Singh, who always read from a prepared script and in such a toneless voice that it lost all power to impress. Sonia hardly speaks either and Rahul's meanderings on Jupiter Velocity and similar inane references leave him out of the speaking stakes. That leaves Modi with the field to himself. A skilled orator with a 56-inch chest is pretty much an unbeatable combination, especially when the speechifying involves a great deal of chest-thumping.