“To gain control of the areas through which Chenab flows in Jammu region, Pakistan has systematically backed terrorism and selective killings of Hindus. The purpose is to drive out all Hindus and then stake claim to them, saying they are Muslim-majority areas,” Sant Kumar Sharma, a senior journalist, said. 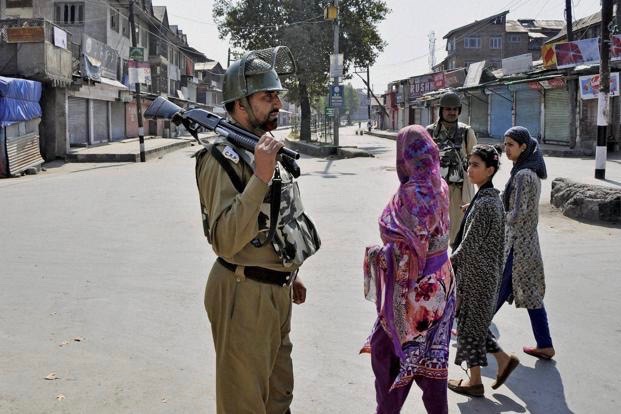 The killing of senior RSS leader Chanderkant Sharma on Tuesday, the second political killing in the last six months in Kishtwar, has reinforced fear in the Hindu community that the town is slowly returning to the early ‘90s state with Pakistan reactivating its game plan of driving out Hindus from the area.

Curfew continued for the fourth consecutive day Friday in Kishtwar town, about 250-km from Jammu city, with heavy deployment of army and security personnel following the killing.

The town was already on the edge after the killing of BJP state secretary Anil Parihar and his brother by terrorists last November.

“After the killing of the Parihar brothers, the Governor and his security advisor were told that Chanderkant’s life is at great risk and that he should be transferred out of the district hospital where he is quite vulnerable to terrorist attack. But nothing was done. These attacks are aimed to force migration of nationalistic people,” local advocate Rajesh Sharma told Outlook.

After the killing of Anil Parihar, security was beefed up of the protected persons and some extra bunkers were put in place in the town, which though were opposed by local PDP leader and ex MLC Firdous Tak.

Former J&K DGP K Rajendra said opposition to strengthening the security grid and increasing of the footprint of security personnel was a standard game of Pakistan’s handlers in Jammu and Kashmir and the government shouldn’t be cowed down by it. Locals says not many bunkers have been set up.

SSP Kishtwar Shakti Pathak told Outlook that they have “established some credible leads” on the murder of Chanderkant and were working on it. “Preliminary investigations suggest the terrorists were not locals, but we are not ruling out anything and hope to nab the culprits at the earliest,” he said.

Chanderkant had worked hard to make the BJP a political force in the area and the party eventually won the Kishtwar Assembly seat for the first time in the 2015 elections.

Kishtwar constituency falls in Udhampur-Doda parliamentary constituency of Jammu region which goes to poll on April 18. On Monday Union home minister Rajnath Singh campaigning in neighbouring Doda district said: "If someone takes up arms, we can go to any extent to give them a befitting reply."

Doda region comprising Doda, Kishtwar and Ramban districts is crucial to Pakistan’s gameplan in Jammu region of the state. Pakistan wants to take control of Chenab river, which flows through Doda region and is quite crucial for the neighbouring country.

“To gain control of the areas through which Chenab flows in Jammu region, Pakistan has systematically backed terrorism and selective killings of Hindus. The purpose is to drive out all Hindus from these areas and then stake claim to them, saying they are after all Muslim-majority areas to which it (Pakistan) had a natural claim,” Sant Kumar Sharma, a senior journalist, told Outlook.

India has upped the pressure on Pakistan by claiming more control of the Chenab, which falls under the Indus Waters Treaty. In February, Central University of Jammu organised a national security seminar on “Transboundary Issues in South Asia — Indus Waters Treaty and Indo-Pakistan relations.”

In the last few months attempts are being made to revive terrorism in the area. On March 27, Kishtwar police released posters of seven active terrorists which were pasted in the town.

In March, terrorists snatched an AK-47 rifle and 90 rounds from the Personal Security Officer of Deputy Commissioner Kishtwar after holding him at gun point. Last December, Kisthwar police said it had arrested a local youth, Sehran Sheikh, allegedly working with Pakistan’s Inter Services Intelligence (ISI) and planning a terrorist attack.

Kishtwar town has in the past witnessed killing by terrorists of Hindus. In 1992, Santosh Bhandari was the first BJP leader to be killed. On August 17, 2001, 17 Hindus were massacred in Paddar area of Kishtwar district.

The latest killing is likely to further vitiate, polarise and widen the gulf between the Hindus and Muslims who are already being pitted against each other on the issue of scrapping Article 35A and Article 370, which grants special status to Kashmir.

However, the biggest concern for the security agencies is to contain growing terrorism in the erstwhile Doda region of Jammu where the security and safety of Hindus is an important part of BJP's politics which in early '90s launched the Doda Bachao andolan.